The right to free expression has never been absolute 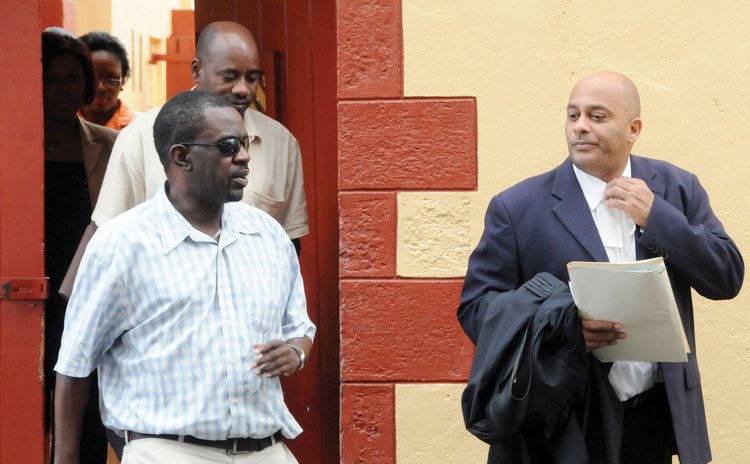 Peltier,left front, and his lawyer David Bruney,right, leave court in 2015

Police Superintendent Cleville Mills will probably ride into the sunset of his retirement with a hefty bundle of dollars from the damages he was awarded last week in the defamation case against radio talk show hosts Matthias Peltier and Angelo Allen and Q95 radio.

In Trump-speak: Good for him; bad for Peltier and Allen and QFM.

As we stated earlier, because of the many talk shows that have mushroomed over the last few years and their increasing popularity and potential influence, there have been numerous calls for some form of control to be placed on people's freedom of expression. In the wake of his award Mills seems to suggest that he would welcome some form of control through a Broadcast Act; Mills even wants libel to be criminalized. Although Mills is free to express his opinion, we beg to differ.

Persons who oppose attempts to control talk shows, and efforts at controlling protests and comments on matters of public importance proclaim that freedom of expression is enshrined in the Dominica Constitution. Are they correct?

"A person shall not be hindered in the enjoyment of his freedom of expression" is a phrase that is often quoted from the Dominican Constitution in relation to the right to freedom of expression and the associated right to access information. It is commendable that in the 21st century, the citizenry of Dominica and of most democratic countries are in tuned with their inviolable human entitlements.

However, there is the very real danger that 'rights talk' without knowledge of the legal issues, may evoke unrealistic expectations of the protection that they provide. There is a misconception among the public that the human rights engrained in the Dominican Constitution are absolute and that they can say and write whatever they want. Yes, you can say or write whatever you want but there are consequences. Very serious ones indeed as Peltier and Allen and Q95 found out last week.

The right to freedom of expression is a term wider in scope than free speech. It covers a number of areas of expression including political expression in the form of public protests, and extends even to pornographic expression. However, the public should not interpret this as giving a right to express anything absolutely and in any form whatsoever. The construction of the right itself is littered with exceptions and qualifications that must be taken into consideration before one can engage in any discussion of whether there has been a breach of the primary right of free expression.

Interferences with freedom of expression are justified to pursue legitimate aims, necessary in a democratic society. Legitimate purposes for limiting the right include inter alia, what is 'reasonably required in the interests of defense, public safety, public order, public morality or public health; for the purpose of protecting the reputations, rights and freedoms of other persons. One need not be a legal professional to recognize the potential for severe incursions into the right to express oneself freely. The act of pulling back the proverbial rug reveals all kinds of legal and practical complexities and uncertainties. Theoretically, identifying a common morality in a society is difficult. It is entirely plausible that the state imposed restrictions on what an individual is allowed to read, see or hear may be an attempt to enforce the moral convictions of some upon others.

Whether a moral autonomist or not, one must agree that the enforcement of the right to free speech does not exist in a vacuum. Social and legal issues affect the judiciary's determination of whether the right has been breached, or an incursion justified. The judicial trend has been to consider not only the type of expression in question, but the severity of the rights breach and the motive of the expresser. Therefore, although the right applies not only to speech that is favourably received, but also to speech that shocks and offends, a hierarchy of protection has emerged. Although all forms of expression will fall into the primary right, all expression is not equally valuable. The level of protection afforded to the expression of political ideas as opposed to sexually explicit expression has been held to be greater in advanced democracies. Moreover, the courts are afforded great latitude in balancing the conflicting right of freedom of expression against the rights of others in respect of privacy, freedom of religion and vaguer notions of tolerance and acceptance in society.

Maybe the costly lesson that the callers to radio talk shows should learn from the Mills-Peltier-Allen-Q95 judgement is although they have a right to freedom of expression they do not have a right to its consequences.