The unfolding humanitarian crisis in the Caribbean 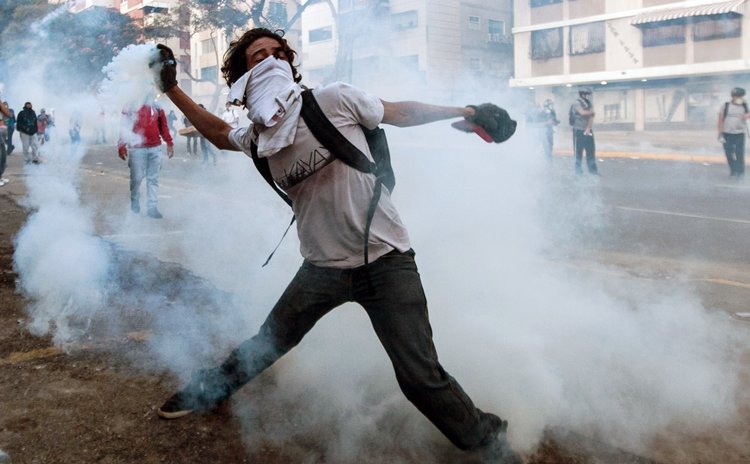 CARACAS, Feb. 20, 2014 (Xinhua) -- A student participates in a protest in Altamira, in the municipality of Chacao, Caracas, Venezuela, on Feb. 19, 2014. (Xinhua/Boris Vergara
By David Jessop

Last month, the United Nations High Commission for Refugees (UNHCR) produced a worrying 'situational update' on the implications of the accelerating numbers of Venezuelans arriving in Trinidad, Brazil and Colombia.

The Geneva based body said that over 40,000 Venezuelans are now present in Trinidad and Tobago, and there are around 20,000 to 30,000 in Brazil's Roraima province which borders Venezuela. It also noted that 100,000 Venezuelans have sought refuge in Colombia in the previous six months, with vastly larger numbers having arrived previously. The report did not include Guyana, or Curacao where local media coverage and anecdotal evidence indicates a rapid increase in the number of arrivals.

The UNCHR went on to observe that while it was difficult to predict whether there will be massive cross border movements of persons 'the "drip-drop" arrival of Venezuelans has now become a steady flow; (and) current trends suggest that out-flows are unlikely to subside in the near term'.

Its situational report also noted that there was no consistent effort to register the number of Venezuelan nationals entering or leaving any of the three nations; indigenous groups were being displaced; and 'in certain areas, armed groups and illicit trade interests' were exploiting newly arrived persons, and the local population.

In Trinidad's case, the UNCHR said that it is now working on programmes aimed at addressing the capacity needs of the immigration authorities. It had also identified the need for training the country's security and law enforcement authorities in the requirements of international law; has noted the need to improve the technical capacity to address the potential response that might be required; and has said that there is a need to tackle incidents of xenophobia. It indicated too that dedicated donor support may become necessary 'should additional arrivals increase dramatically'.

What is more generally apparent, from recent comments made by UNCHR representatives and others, is that the Caribbean region and civil society is unprepared to deal with the humanitarian crisis that would follow a flood of refugees, should there be any further deterioration in the internal situation in Venezuela.

Although by global standards the numbers of those presently seeking a safe-haven in the Caribbean is relatively small, arrivals on any more significant scale in small island states has the capacity to generate social tension, especially where there are already significant numbers of disadvantaged citizens.

The situation is further complicated by the fact that many CARICOM nations and the Dominican Republic lack relevant laws, have no organised approach to processing economic migrants or asylum seekers, and see government agencies taking what might be described as an ad hoc approach to arrivals who have been able to obtain entry illegally.

Responding to such concerns, Trinidad's Attorney General and Minister of Legal Affairs, Faris Al-Rawi, recently told the Trinidad Guardian that while he recognised there was a need for specific legislation to assist foreigners seeking refugee status, the country's first focus must be on ensuring that its most disadvantaged citizens have utilities and social services, despite the growing pressure on resources.

None of which is to ignore the individual human tragedy, or the suffering of the tens of thousands of women, children and men who feel they have no option other than to flee, but to try to illustrate the complexity of the humanitarian crisis that the Caribbean now faces.

In Venezuela itself, there is little end in sight to the continuing civil unrest. After months of anti-government street protests, detentions, escalating violence, at least 70 deaths, shortages of almost all basic necessities, and hyperinflation, there is no sign of resolution.

In the last weeks alone, images have appeared of a National Guardsmen shooting at demonstrators; Venezuela's Supreme Court has allowed proceedings against the country's Chief Prosecutor, Luisa Ortega, who has become an outspoken critic of the country's socialist government; and President Maduro has reorganised his government in a manner that appears to give greater influence to the country's military.

These and other developments threaten to make worse the already severe crisis that followed the Venezuelan government's decision in April, to create a constituent assembly, with the ability to rewrite the country's constitution. Although President Maduro argued that it was a necessary step to restore peace and avoid the danger of a civil war, opposition critics and many ordinary citizens regard it as an attempt to side-line the elected opposition-controlled National Assembly and take absolute power.

Unfortunately, the resulting political polarisation within Venezuela carries with it unpredictable consequences for rest of the region, especially for those nations that are geographically close.

Worryingly, as if this was not enough, the UNHCR says that more generally and in parallel, the region is also confronted with mixed migration; a relatively new and complex phenomenon involving individuals who may be asylum-seekers, refugees, victims of human trafficking and stateless persons.

In a report addressing global resettlement needs for 2018, the UN body said that the Caribbean was not just witnessing movements of persons from Venezuela, but was also experiencing a sharp rise in arrivals from Cuba and Haiti, and from extra-continental countries including Syria, Bangladesh, Pakistan, Nigeria and several other African countries.

The Caribbean is justifiably proud of its humanitarian record, its willingness to provide assistance to sister nations at times of need, and of the many unmentioned charitable acts delivered by organisations and individuals.

However, if the crisis now unfolding cannot be resolved and ever greater numbers of Venezuelans flee their country, the help provided by the UNCHR, the Red Cross, NGOs and citizens will not be enough, and the region will be hard pressed to address the scale and type of difficulties that will arise.

Whatever the circumstances or their origins, the implication is that any surge in arrivals will create significant pressure on resources, and raise new and challenging social, political, logistical, legal and security issues that are likely to remain with the region for many years.