The value of our right focus on infrastructure 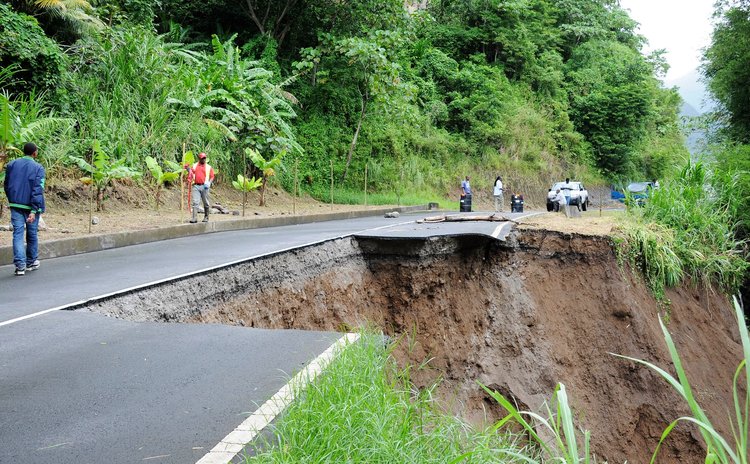 Damaged road in the Roseau Valley
By Parry Bellot

In my very first REBUILDING DOMINICA BETTER article in this series of weekly columns (after T.S. ERIKA struck in August 2015) I posited that roads, housing, facilities in our rural communities, etc. would be an expected priority area for the government. Fortunately, they still are – Dominica is a special challenge in these areas because of our terrain! In the last few months, we have witnessed much funding allocations, most of it by virtue of the extraordinarily successful Citizen by Investment programme. Indeed, the regular cheques issued – and not for small amounts – have the potential for TRANSFORMING the quality of life in our rural communities, such that there may well be a reversal in the long-existing trend for persons to gravitate towards living in Roseau and Portsmouth.

A recent Report from the WORLD BANK published just last April reminds us that "Infrastructure investment can be a powerful engine for growth in Latin America and the Caribbean as the region emerges from six years of slowdown, including two of recession," Clearly, the Dominica gov't has fully recognized this, given its demonstrably large and impressive investment in road infrastructure for the last 6 or 7 years. Notably, this is not only where major road networks are concerned, but extending to those even closer to where the PEOPLE of our Nature Isle reside.

The World Bank Report also cautions governments generally that "in today's tight fiscal context, it is essential that investments be as efficient as possible, and that the full potential of the private sector be tapped." Private Sector? What do they have to do with roads?" Well, consider the Bank's explanation: Rather than focusing on often poorly defined financing gaps, the report advocates for addressing those "service gaps," according to countries' development priorities. In effect, this means putting in place efficient ways of addressing these needs and developing clear rules for deciding "when taxpayers should finance services, instead of users."

In Dominica's context, how could this apply? Here's what immediately comes to my mind: First, consider FULLY PRIVATISING the controversial "Public Works statutory board" - - to the extent that patching roads could be on a "PAYMENT PER POTHOLE REPAIRED type of system. So…the more of them QUICKLY identified and repaired – the QUICKER Public Works and its workers EARN their money! My second idea would be to FINANCE a long overdue but very necessary SEA-BY-PASS in the Newtown area and to service THE LOAN REPAYMENTS by a USER-FEE TOLL applied at RUSH-HOUR (morning and midday times only) for those drivers who OPT at those PEAK HOURS to utilize the faster by-pass route… Yes, it is thinking outside the box, but why don't we examine the feasibility … Note. we may not even have to depend on the CBI for the funding!