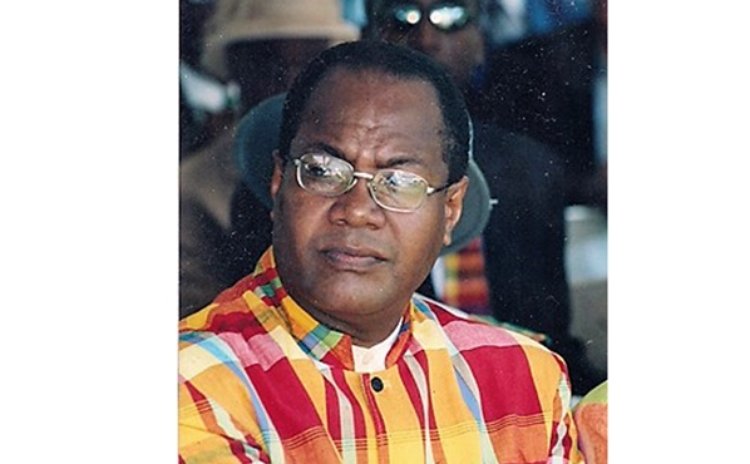 Yes, indeed there are those who are born with it and we must listen when they talk. It has nothing to do with charisma or style or good looks; it's like Dubai of Radio Antilles, Julien Rogers; or listening to Dr. Martin Luther King, Dr. Phillip Potter, Jeff Charles, politicians Eustace Francis, Jenner Armour, Pat Stevens, the Douglas brothers Mike and Rosie, Edison James and for some time now long before politics the Hon. Lennox Linton fits the billing of an outstanding orator whether you are blue, red or green. Well, if politics has clouded your judgement then you may want to agree that Raymond Lawrence is the man.

Since Radio Antilles days, fondly called the Big RA, Ray was destined for fame. Now I find it difficult at my age not to draw a parallel between carnival, culture and pageants without 'the voice, 'that Voice. We fondly remember Shermaine Green-Brown, Steinburg Henry, Dennis Joseph, Ken Richards, who all have signature voices and a masterful command which colour the English language. Some of these politicians mentioned even if you do not necessarily like their politics, or feel that they are just fooling the people but you would have to admit they were, and are, great orators.

Since the departure of Ferdina Frampton, we saw sparks in Terella Alexander and now DBS's Hazzari Williams, Sheena Harry of DBS and Q95's Pearl Etienne but never has radio or the Dominica stage been blessed with such an indomitable signature voice and command as Raymond ' Brother Ray' Lawrence.

It a voice one could pay millions for, just as the-much-talked- about CNN's Bernard Shaw of the 80's; rich, crisp full of wisdom, reassuring. In a world where not much seems to be thought of the expert use of language or the tone, where everyone pronounces any how anywhere or stress on any syllable regardless of the office held or that they may be looked up to as role models, these proponents of language are renowned for the usage of the gifts that were given to them.

It's almost like music to listen to these individual speak; delivering a speech, as announcers, conducting interviews frankly anytime they open their mouth.

There is a certain amount of charisma one needs to have people respond and do their bidding and probably Prime minister's John and Skerrit best fit that billing in a Dominican context, but it is another thing when your voice exudes strength and command that forces ears to stay tuned. Raymond Lawrence epitomized this command of the microphone, throughout his entire life.

I am sure we can all relate to teachers who captured our attention in the classroom not because they were necessarily more competent than others but the way they spoke, read or gave instructions in the classroom. Tone are God given, you are born with it but like gifts it must be harnessed over time through education and public speaking.

Our parliament sadly lacks in this area and many of the youth parliamentarians are much more eloquent than the national counterparts. What is even more appalling after years as representatives there seem to be no sign of improvement in pronunciation or enunciation by these individuals in the highest debating institution on island. When one does not have the required tone on radio or in the parliament building one's decorum, choice of words etc can speak volumes about your representation in the House. Indeed you have to be able to articulate concerns and argue points without being derogatory or un-parliamentary. If one has a speech impairment for instance one need to speak slowly and coherently.

I am completely flabbergasted when I listen to some radio announcers during outside broadcasts of carnival shows for it does not take long to realize many do not read to inform themselves, and so they are not knowledgeable or can't they comment sensibly or give listeners a ball-by-ball by way of painting an accurate and vivid picture which captures what is before them.

This is where I call on the 50-year veteran Ossie Lewis to conduct seminars as our foremost comments personality for cricket and Kaiso. Joseph Thomas is another resource in cricket commentary and Shermaine Green –Brown for pageants. All of the aforementioned persons have developed a style to go with that God given 'voice'.

However, standing at the pinnacle of it all is 'Brother Ray' who I once again call to be bestowed the highest award this land has to offer and we should not wait for him to be showered with priestly accolades as was done with Ava Mc Intyre a few weeks ago.