They stole his song

Cadence great Gordon Henderson: "I may settle for a symbolic dollar, one million and a cow" 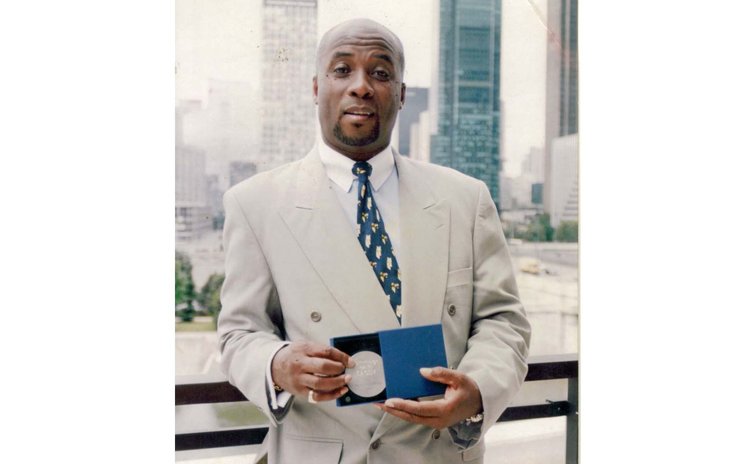 Gordon Henderson shows one of his albums

The Ministry of Foreign Affairs is expected to engage Brazil to seek a diplomatic solution in a copyright violation case that could be worth millions of dollars.

Henderson says his song was plagiarised and adapted in Santos' Portuguese song titled "Quero Voce", without his permission and without acknowledging him as composer of the original music.

To date, over three million copies of Santos' version of Henderson's song have been sold. The international benchmark for Moral Rights entitlements to creators is US$1 for each plagiarised copy sold.

However, Henderson emphasized that the compensation process is a negotiation involving several variables, so this does not mean his settlement would be for multiple millions of dollars.

He explained, "I may settle for a symbolic dollar, one million and a cow . . . after the complete amounts of Economic Rights have been determined."

In a press release, Henderson said, "I have many options, but the diplomatic option serves me well since it allows me to . . . share my earnings directly and indirectly with my fellow Dominican citizens."

Under copyright law, a party wishing to make use of the creative work that belongs to someone else must clearly attribute the work to the creator and preserve its artistic integrity.

Also, it infringes the creator's Moral Rights if another party falsely claims to be the creator of the work, or amends the work in a way that would affect the creator's reputation negatively.

Henderson said Warner Chappell Music-- the publisher with transferable rights to his song-- is taking steps to get damages and other compensation related to the infringement Economic Rights.

However, as the composer of the original music of the song, Henderson retains the Moral Rights, which are inalienable and non-transferable. As such, seeking redress and compensation for infringements of Moral Rights is solely Henderson's responsibility, for which he has sought the assistance of Dominica's Ministry of Foreign Affairs.

Henderson explained that even if Santos had the right to record the song without the composer's permission, by law he would have had to attribute it to Henderson and pay for replication rights.

"By stealing my song [Santos and his accomplices] stole my "rights" and they kept the royalties," he said, adding that by getting caught they have now lost everything to him.

Henderson said Dominica's Minister for Trade, Ian Douglas felt the case gave Government an opportunity to engage Brazil at a diplomatic level and seek get a swift solution.

Based on this, the Ministry of Trade has taken up the matter with the Ministry of Foreign Affairs in order to craft an appropriate diplomatic intervention with Brazil to seek an amicable resolution.

According to Henderson, Matthan Walter, Director of Trade (Ag) in the Ministry for Trade confirmed in January that the necessary information and advice had been collated and drafted.

The particulars of the case are now ready "for onward transmission to the Office of the Minister of Foreign Affairs through which diplomatic notes are channeled," Henderson noted.

However, Henderson noted that while the Ministry of Trade was swift and effective in pursuing this matter, he hasn't had any feedback as yet from the Ministry of Foreign Affairs.