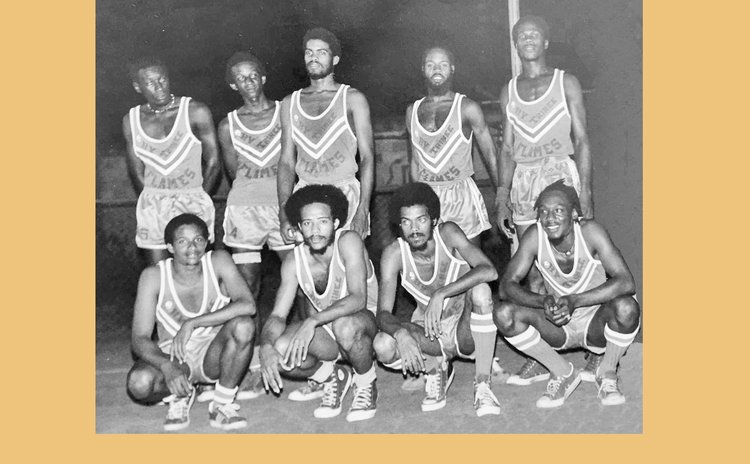 You hear the word "flames", and immediately heat and fire consuming almost all that come before them come to mind. And if you are a mid-1970s to late 1990s basketball player or fan and you hear that same word, then a senior, intermediate or junior team playing in the national basketball league should come to mind.

Yes, Flames of the 1970s consumed many a team that opposed them in the League and Knockout Competitions.

That fire began in the early- to mid-1970s when some youngsters from Fields Lane and Virgin Lane used to go regularly to St. Mary's Academy (SMA) to play 'win-ball' cricket, just for fun. Guys with nicknames such as 'Aloe', 'Black', 'Carlty', 'Fanso', 'Neckers' and 'Lenny' were those cricketers in question.

Those teenagers first saw basketball being played at SMA and were quickly drawn to this exciting game. They picked it up, developed and sharpened their skills, and soon thereafter decided to form a team which they named, Flames. And they were very thankful to Cardinals' Willie LeBlanc who provided them with their first basketball, but quickly advanced to scorch Willie's team and others in the national league.

Flames' Formative Years: Flames appeared on the scene in April 1974 and the team's two available match scores for that year were losses to Raiders (35-50) and SMA (30-37).

"There was that unity among us. We used to walk up to the Park as one unit, picking up members as we went along." This is how 'Fanso' Etienne – a non-founding member of Flames described the bond that existed among the members of the team in the early years.

However, more importantly three member of Flames, viz. Oliver Burton, Seibert Didier and Augustus Harris were selected on Dominica's State Team for the inaugural Windward Islands Basketball Tournament which was staged in St. Lucia that year.

At 2 years old Flames embarked on a mission: To add another chapter to Dominica's basketball history, and be the second team to deny a championship trophy to the then seemingly invincible Cardinals who had already amassed 15 League & Knockout championships in eight seasons.

In 1976 and 1977 Flames burned ferociously, scorching Cardinals' wings somewhat, and capturing the 1976 League then 1977 Knockout Championships, with Cardinals securing the Knockout championship in 1976 then League in 1977, in a sort of exchange.

The year 1977 saw Flames burning opponents such as Rockers, Ball Wizards, Pros, Harks and Cougars (Cardinals) among others, but unable to retain the League Championship. However, they defeated rivals Cougars 93-90 for the Knockout Championship, with 'Neckers' hitting a massive 36 Pts in that encounter, supported by Seibert, 26.

Dominica's Independence year, 1978, was probably the biggest for the fiery Flames in their 5-season history thus far, copping both Championships at stake!

They defeated Cougars 66-64 for a three-way League Championship tie with Cougars and Pros, then spread their consuming heat to defeat Harks 78-69 in a replay for the Knockout Championship. According to The Chronicle of 14th July 1978, the first match with Harks had ended at 73-all, and those results had required "checks and rechecks".

That list also includes Clifford Gibbons, McPherson 'Moo-Moo' Henderson, Henry 'Hendo' Hilaire, Glen Jno. Baptiste, Lyndon Johnson, Garth Joseph, Ywaine 'Jann-Jali' Magloire, Joseph 'Myred' Peters, Donavan Roach and his brother M. Roach, Kevin 'Shae' Sorhaindo, Norbert Tom, and Johann Yorke among many others. Some of those players subsequently went on to play with other teams, while others had been drafted from other teams. Continues next edition