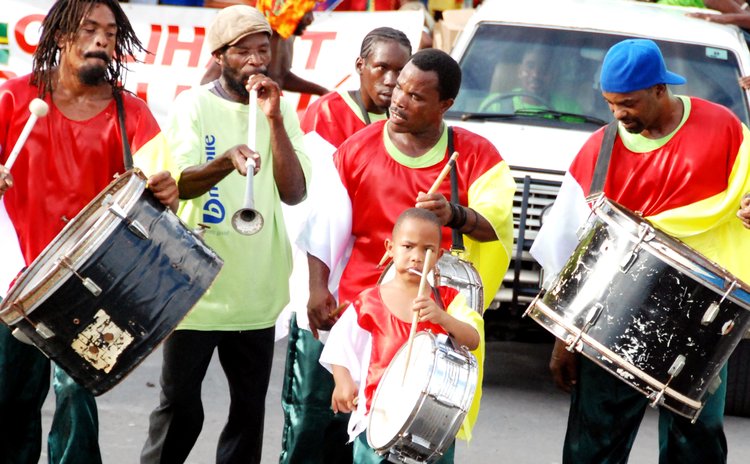 Traditional Musicians at opening of carnival
By Ian Jackson

Since a survey of cruise ship visitors indicate that an overwhelming majority would like to experience the fullness of Dominica's culture combined with the country's heritage as part of their brief visitor package, I would therefore recommend that our traditional Creole groups be engaged at these sites.

These groups are well positioned to be employed at these sites because these visitors want the authenticity of the Dominican sound as provided by the traditional groups who do not need electricity or amplification which is in keeping with the natural setting.

The island has a total of 13 heritage sites and really their absence at these sites is a startling underutilization of our musicians who can only enhance the experience of the visitor in keeping with their expectations. This can be facilitated through organized tours by Dominica taxi and tour operators in collaboration with the Discover Dominica Authority. Musicians should also be paid for their services as tourism authorities frequently request their services but allow the musician to depend on the goodwill or tips from the tourists which are most time grossly insufficient. Some tourists are of the misguided view that they have already paid the musicians in packaged tours.

Most traditional groups consist of an average of four musicians and they would relish the opportunity of at least weekly engagements right in the villages where they reside. It is instructive to note that most villages here are blessed with several practicing musicians preserving the Creole traditions of Bèlè, Quadrille, Flirtation, Jing Ping or the more contemporary Cadence and Bouyon music. With high unemployment among the populace, musicians whom I interviewed said they would readily make themselves available if asked. Based on the 2008-2009 empirical data it is suggested that a mere 5% of visitors' site fees or .40c from every $8.00 paid can ensure that approximately $4,017.15 is collected per week to employ traditional musicians without increasing site fees.

The Tourism Product Development Company of Jamaica has successfully utilized entire towns which are on their way to become world heritage sites. In this connection I would further recommend that because of the potential that exist in the Kalinago Territory where tourist can immerse themselves in the music and culture of the people apart from its natural attributes, could be elevated to Heritage village status. Heritage tourism is not just about architecture and natural attributes but is inclusive of popular culture, recreation and entertainment. In fact the latter and local community involvement is rated by many experts amongst the eight most salient requirements for the sustenance of a heritage village or site.

When one speaks of heritage one often thinks of artifacts, museums and other natural attributes, but rarely do we think of people. Activities of musicians provides differentiated experience as highlighted in the paper "Live at Leeds" written by Dr Stephen in 2007. He argues that music was successfully used as a marketing tool for the University at Leeds, England. Henderson reiterates that the home of Elvis Presley or John Lennon draws thousands of visitors annually. The same can be said of Michael Jackson and Bob Marley's residence on Hope Road, Jamaica.

This shows the importance of our music heritage as an overall part of the tourism experience. Hence, I would propose a strategic marketing plan to position the Kalinago Village, and or Grand Bay, the country's cultural capital, as heritage villages where traditional music, dance and other cultural activities could provide motivation for tourists who would relish such nostalgic locations, not just for the aesthetic appeal, but for educational seminars, weddings and research.

The European Union sponsored Waitukubuli National Trail is another such facility where this could be explored. Through its reception, rest and refreshment points it could provide similar opportunities in branding Dominica's rich Creole music and culture to visitors in a community setting.

Notwithstanding the above, there must be a serious strategy to engage our youth in music, business, education and technology at the CXC level at all secondary schools. No longer can music be seen as a "free up" or pastime just for First and Second Formers but really it's a career. Hence, investments must be made to equip schools with musical instruments and teacher training up to first degree level and not merely piggy back on teachers' raw talent to do the job. Hundreds of youth in this country have a genuine interest in music as they demonstrate by the number of albums and music videos they produce annually. Therefore, if 'tourism is everybody's business' then young musicians must feel that they have a stake in it and must be employed at our heritage sites, our hotels, travel and tour operators (as opposed to the playing of hi-fi music). It should be government policy and these musicians must not be used just to draw crowds for political rallies, independence celebration activities or when a new cruise ship is in port.