Tyre burning at the landfill in Fond Cole 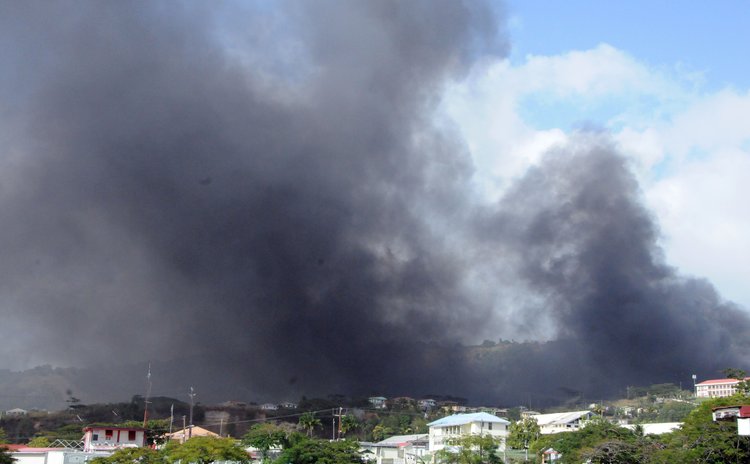 I was one the refugees who left Roseau on Friday, March 13 when I realized the billowing, black smoke wasn't a storm cloud but rather a fire out of control. As I drove back home I looked cautiously at the ominous black smoke, could smell the toxic air and watched which direction the wind was blowing. I came to a conclusion that such black, dark, thick smoke was usually caused by tires burning. I also realized locals, firefighters, tourists and myself would be affected by the toxic chemicals being discharged into the environment, so I did some research about what Dominica can be facing with this accidental burning.

There are two types of tire fires – fast burning events as Friday's emergency, leading to almost immediate loss of control and slow burning which can continue over 10 years! Tire fires are usually the results of arson or improper manipulation with open fire, since tires are not prone to self ignition.

Extinguishing tire fires is difficult, I commend the fire fighters that put themselves at risk against an almost impossible task. The extinguishing and cooling down can take several days so covering the fire with soil seems to be a viable solution. Being on site poses extreme toxic health risks since the thick, dark, smoke contains human carcinogens in the form of carbon monoxide, sulfur, benzene, and products of butadine and styrene. Additionally, the chlorine content in tires leads to the creation of dioxins and furans which are extremely toxic chemicals known to cause birth defects, inability to maintain pregnancy, decreased fertility, reduced sperm counts, endometriosis, cancer, diabetes, learning disabilities, immune system suppression, lung problems, skin disorders, and more. The dioxins and furans are really the "bad boys".

Depending on the length and degree of exposure these toxins can cause irritations to the eyes, mucous membranes and central nervous system depression. I do hope the fire fighters were equipped with respirators and dermal protection. Tire fires can affect whole communities or small islands due to the pollution of not only the air, but soil and water. Tires on fire break down into hazardous compounds including gases, heavy metals, and oil. The oil seeps into the ground and surface water. The surrounding communities in Fond Cole need to be aware of this. Imagine, the average passenger car tire is estimated to produce over two gallons of oil when burned! There were hundreds of tires on site which ups the amount of oil seeping into the ground.

Evacuation of locals, students, and tourists could have been facilitated more rapidly but I doubt Dominica has an emergency evacuation plan in place for tire fires. The public needs to demand that such a plan will now be initiated. The children, pregnant women, and elders are at greatest risk with genetic damage from toxic pollution continuing in the surrounding areas. Now I know what I've written is NOT a pretty picture but neither was the black toxic smoke cloud covering Roseau or the quick escape of the cruise ship.

Yet we are not helpless. We can personally take the necessary steps to ensure our village councils practice their own emergency evacuation plans; demand that government have standards in place for dump sites that include non-crisis monitoring; mandate that all emergency personal be equipped with the necessary gear; require all emergency personal have regular drills to review and practice evacuation procedures for tire fires and other air borne crisis; require schools teach self- help techniques to reduce toxic poisoning for their students; educate adults to learn what herbs ,supplements and self- care they can perform for themselves and their families.

The point I am making here is "what we don't know CAN hurt us very badly." I am presently tell all my patients to drink coconut water daily for one month and drink a tablespoon of the coconut oil daily in smoothies or cereals for a month. Let's turn this horrendous event on our beautiful Nature Isle into a wake-up call. Be responsible for your part to play so this NEVER happens again. Apres Bonde ,C'est La Terre.