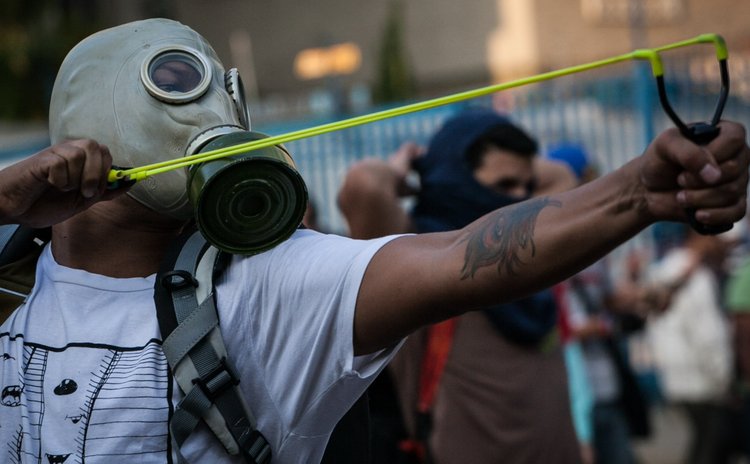 Last week, after months of growing street protests, detentions, escalating violence, at least 36 deaths, and shortages of almost all basic necessities, Venezuela's President, Nicolas Maduro, announced the creation of a constituent assembly with the ability to re-write the country's constitution.

Although he has argued that this is a necessary step to restore peace and avoid the danger of a civil war, many opposition critics and ordinary citizens regard it as an attempt to side-line the elected National Assembly and take absolute power.

Irrespective of which version one believes, or to set aside the view that a humanitarian crisis is being manufactured to bring about regime change, it is to observe that whatever the outcome, those who continue to suffer most are the Venezuelan people.

That this should be happening in a country which has the largest oil reserves in the world is a sorry reflection of what happens when the link between sound economic management, pragmatism, good order and the late President Chavez's understandable early social objectives are lost in the singular pursuit of ideology and the retention of power.

As each day passes it is becoming clearer that the rapidly deteriorating internal situation in Venezuela has consequences for near neighbours.

Within CARICOM significant divisions have emerged about the extent to which countries should respond politically to the growing internal crisis in Venezuela. At the same time concerns have begun to emerge about the effect on regional stability if a refugee crisis were to occur.

These divisions became publicly apparent on April 26 at a meeting of the Permanent Council of the Organisation of American States (OAS) which approved a resolution to convene a meeting of OAS Ministers of Foreign Affairs to consider the situation. In response, Venezuela and countries that support its position, sought to have the motion rejected, describing it as an interference in their internal affairs.

The decision subsequently caused the Venezuelan Government to decide to withdraw from the organisation, a process likely to take two years.

In an indication of the emerging regional polarisation that may now follow if the internal situation in Venezuela deteriorates further, the country's Foreign Minister, Delcy Rodriguez, said the Maduro Administration's decision to leave the OAS was to counter what it sees as an attempt by the body's members and conservative regional governments to topple President Maduro.

The matter has been made unnecessarily more complex by the OAS Secretary General, Luis Almagro, who has taken a public position opposed to Mr Maduro's government. His outspoken comments have been widely criticised, being described in a recent formal statement by Bruno Rodriguez, the Minister of Foreign Affairs of Cuba, which is not an OAS member, as 'frenzied'.

Unfortunately, there may now be other more practical human consequences.

Firstly, in a number of countries geographically close to Venezuela, including Trinidad, Guyana, Curacao and Brazil, there is concern that the humanitarian crisis now unfolding may increase the number of Venezuelans seeking to flee their country, with implications for sub-regional stability, and something not seen in the region before: a refugee crisis.

Already in Trinidad there is a growing presence of Venezuelan men, women and children in villages in the central, south and south-west of the country, and evidence that mainland criminal trafficking networks are emerging, offering transport, documentation and safe houses to those who can pay.

Separately, other neighbours like Guyana are concerned about the possible impact of instability on the international dimensions of their unresolved territorial disputes, as well as the challenge of successfully maintaining the integrity of their land borders.

Secondly, the inability of CARICOM to agree a single position, once again points to the near impossibility of the region ever having a single, coherent foreign and security policy.

Whether Governments chose to admit it or not, some are hopelessly compromised as holders of Venezuelan debt under the PetroCaribe arrangement, and by promises of future investment.

In contrast, others are aware that for reasons of real politick relating to future relations with the Trump Administration, or their party to party ties to like-minded conservative groupings, that there is value in backing the US's government's desire to see gone the Maduro Government and the present leadership of the Venezuelan military.

Thirdly, in some quarters in the US there is a political view that Venezuela could, with hemispheric support, become a tool to engineer other changes in the Americas. It is already the case that Venezuela's deteriorating economic situation has in part forced Cuba into new period of austerity and economic uncertainty.

Fourthly, whatever happens in Venezuela is likely to affect the posture of China and Russia in the hemisphere. Russia sees Venezuela as an important strategic ally in the Americas and is likely to defend its position. China, in contrast, sees potential economic opportunity, but holds significant amounts of Venezuelan debt, largely repayable in oil and other forms of investment.

And fifthly, what happened at the OAS last month makes clear that important future choices will now arise as to the best future vehicles through which the nations of the Americas try to resolve political differences. Although the US, Canada and others still see utility in the OAS, there are signs that in the Americas and beyond, some see this as being the role of the Community of Latin American and Caribbean States (CELAC). In this, the danger is that no hemispheric institution will in future have absolute validity.

The response to the crisis unfolding in Venezuela illustrates how debt and short termism has led Caribbean governments to be conflicted. It also suggests how little long-term thought has been given beyond the region as to what might happen if Venezuelan largesse were to dry up. It demonstrates too that the new ideological divide is widening. There is a danger that the crisis now emerging may encourage a US administration, once again to challenge the independence and sovereignty of the nations of the Americas.

Previous columns can be found at www.caribbean-council.org May 5th, 2017