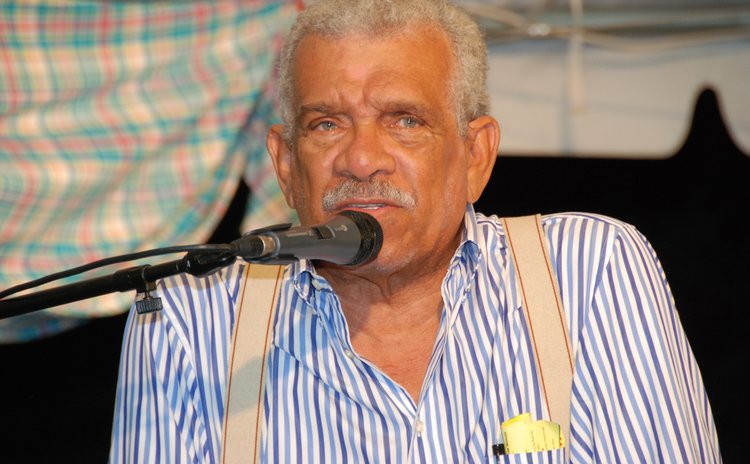 Many of us, Dominican writers, waited with bated anticipation to listen to Derek Walcott, someone we studied, loved and revered as a great Caribbean son. It was just two weekends ago the St. Lucian-born formed part of the distinguished trio for the Book Fair and Literary Festival spearheaded by former UNESCO Cultural Adviser, Dominican, Alwin Bully.

Though the esteemed Jamaican poet, professor Mervin Morris and Trinidadian story teller Paul Keens Douglas were present to perform their works, no one carried the same accolades as Nobel Prize laureate Derek Walcott of world fame.

What we anticipated was an inspiring talk with the master but that turned out to be cynical indeed. First, there was the criticism of high-rise hotels in St. Lucia and in the region which he described as edifices which created a disparity between the people and the fact that some of these investments should be directed at creating structures for the performing arts. Many applauded these sentiments and the fact that we should have a greater stake in our region which is being bought over by foreigners.

But even while this article is being read, Mr. Walcott is in a fine hotel facility in Guyana. The esteemed gentleman is totally against wasting funds on sending people to CARIFESTA, yet he has attended many and is due to hold a workshop there as you read. For many of us who received no money for preserving our arts for many decades, a visit to CARIFESTA to represent our country means so much, to interface and share with our regional counterparts. New Dimension members only know this too well as they feel so elated even if they return as poor as they left, according to Mr. Walcott.

Mr. Walcott was particularly severe on performance poetry pointedly on Ras Mo's who preceded him on night two. In fact, in his usual cynical style, he said he was going to do a one line piece, repeat it all the time, over and over to drums but obviously changed his mind. Performance poetry has call and response as well as repetition as an integral part of its presentation. Ras Mo was just given a special recognition award for his work in that field not only in Dominica but in Connecticut, appreciated by people of a clearer complexion then the great Mr. Walcott.

Mr. Anthony Toulon was brave enough to present the Nobel laureate with a gift of one his publications. Surely, this may never be glanced at as this great son of the Caribbean repeated more than once that the work presented by the Dominican writers were not only poor – but "very, very poor" – the whole world listened to this scathing comment.

According to the gentleman, only Alwin Bully of Dominica represented anything substantial and of course, one may add Professor Mervin Morris and his two St. Lucian counterparts. Amongst the list of the very poor were former CHS principal and English teacher of decades Dorothy Leevy, Mr. Alick Lazare, the author of the wonderful novel, Parcell, the youthful talent of Monelle Alexis, Gloria Augustus – winner of short story competitions on a number of occasions, Lennox Honychurch, my teacher of the Seventies and deputy Chief Education Officer, Arundel Thomas and even Gabriel Christian and Ivenia Benjamin's work was overlooked as budding publishers.

I certainly agree that Mr. Walcott is right when he says that Dominican writers need to read more and improve their craft, starting with your humble servant. But the truth is, there will be very few Walcott's in this world with such exceptional talent. However, these are various genres of poetry, just as music, that we may not really like, but at least some encouraging words should come from such a renowned Caribbean and world personality – at least to encourage the young in particular, such as Alpha Darius, Shenell Jolly, Monelle Alexis instead of bluntly labeling them as "very, very poor". A little word or advice to the poets like me would go a long way since we are all willing to learn from the master. It was not right and very few will say it because, for many, Walcott can do no wrong when it comes to literature. Because I am silly, I beg to differ; as I am sure what I have written is also "very, very poor".