What About Michel Raffoul: No One Cares 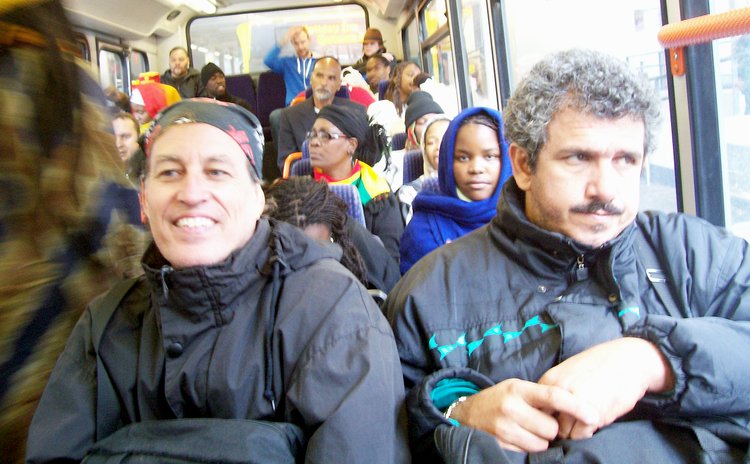 Actually the above title, No One Cares, is from a calypso that I composed which took calypsonian Observer to the finals in the mid 90's. Also quite by chance, this theme forms the basis for my dialogue on the arts with you, my readers.

No one Cares referred to the situation which particularly had to do with costume builders who labored day and night at what was called the 'Ice Factory' to ensure carnival queen costumes were intricately designed only to be destroyed or dismantled without any form of showcasing after the street parade and Ash Wednesday. Incidentally, one of these tireless laborers in the field for about two decades has been Michel Raffoul. What's more he did it with the same dedication as Darnley Guye, Clarence Douglas, John Liverpool and others; a labour of love since there was really no money involved.

Raffoul announced his retirement two years ago but his love for the art and the colour and the spectacle, part of which is supposed to exemplify Dominica's "Real Mas", kept him coming back. At the time of writing, July 2nd 2013, like Nelson Mandela, Michel is battling for his life overseas having been in a coma for about one month to date- he is on life support- and I really hope for the best, as the best can be, in these dire circumstances.

Nonetheless, what his present condition has done for me is to cause me to further reflect on my own mortality. I am sometimes close to tears when I consider that this guy who donated many a crown to calypso, teenage pageant and as someone advised me, queen shows, apart from his annual costume designs, yet no one in culture, the DFC, the Minister of Culture, Dominica Calypso Association, Queen Show Committee has publicly or officially sympathized, offered get-well messages to this artistic brother.

No one cares or rather Nobody Loves Nobody, as Shadow puts it. This is the culture of ingratitude we have adopted in the world, but in my country, Dominica, it's so blatantly obvious that we only use people when we require their services. Oh yes, Michel was thought of when a crown was needed or when that queen was looking for a certain costume. Have we seen how Jamaicans tout their past heroes on RE TV, be it in music or sport? They won't let the world forget about Marley or Garvey and they even archive their heroes and bring them on from time to time as they grow old, to share their reflections.

We are so close to the Chinese and the Venezuelans but don't we see how they cherish their Chavez and liberator Simon Bolivar and erect monuments, even in other countries, such as ours, and even get our children to pay homage to this hero? Compare this to how quickly we forget the father of our nation EO Leblanc and the father of independence Patrick John.

The same is going to happen to Chubby, Ophelia, Raymond Lawrence, Gordon Henderson, and Alwin Bully; and is likely to happen to Jeff Joe two years from now. Remember, no observance or remembrance was held in honour of Rosie Douglas last year because reference to him is no longer politically relevant or expedient. No one says anything about the late Eddie Toulon, the first Executive Director of the DFC, for instance. Today, we are erecting a faceless statue to remember the Negre Maroons, after many generations have passed- their names and graves are unmarked and school children are not taught about them. We can only hope it's a start, as late as it is.

Friends, life goes on, and we all must depart and face our Maker but I've seen the ingratitude that is meted out by children to parents, grandparents or even step fathers who stepped in when there was no dad. Not too long ago it was a given that if you grow old enough or become ill at least one child will be there for you. Today we are familiar with these comments: "Put her in de infirmary" or "She die already, what I can do? I cannot come, I trying to get my green card". No one cares about you; they forget the good you did. Tarzie of Triple Kay knows that too well particularly for artistes, as persons who pretend to be your fans or supporters will use every opportunity to bring you down and to hell with you when you are gone as long as they are at the Happy Hour.

I really trust that by the time this article is published there will be better news on Michel Raffoul and may this be a message to all those artistes in Dominica who now have audiences in frenzy or girls running after them. You will soon learn, I hope not too late, that in the final analysis- NO ONE CARES. When the dust settles it will be like you never existed.