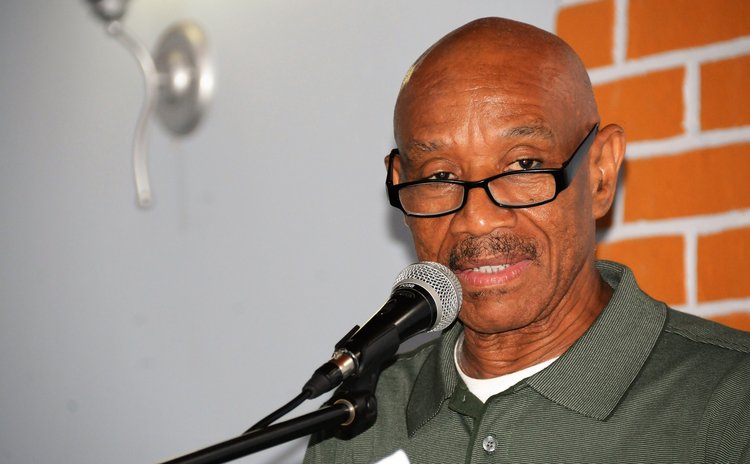 Before this downturn we are forced to recognize the works of performance poets Ras Mo and Gregory Rabess as two of the pioneers in the presentation of performance poetry. Ras Albert Williams, is another of the Writer's Guild pioneers in 1981 who served as host for two years; the only poetry show ever held on radio , the ever present drums of the late Ras Algie, the poetry of Ian Jackson and Jeno Jacob who dominated poetry organizers who ensured that World Poetry Day was observed and celebrated at the Arawak House of Culture, Alliance Francaise, in block o' style outside the Frontline Book Store and Caribana- homes of the Dominican writers in the Eighties and Nineties.

I remember Writers Guild President Gerald Latouche, Ann Mills, Carla Armour, Albert Panman Bellot, Eddie Toulon, the enthusiastic Jean Rhys protégé Christabel Laronde, Peter Piper- who published the most booklets in his day and the ever present Harold Sealy, the hub around which almost everything revolved.

There were scores, literally hundreds of publications during a span of 20 years. There was a thirst, a hunger for knowledge, for improving writers craft through reading, critique and workshop conducted by locals and even writers from London, UWI and even Africa. Jackson, Latouche and Jacob earned a three-month fellowship to the University of Miami and were tutored by the likes of Professor Mervin Morris, Nobel Prize Laureate Sir Derek Walcott and Haitian writing sensation Edwidge Dandicat. Dominica's writing was well received, different because of the use of folklore, myths and beliefs.

Long before the exploits of Harry Potter's magic and sorcery, Jeno presented obeah, soucoyant and heroes as Copen Lapen. In fact the works from Dominicans were used as features to a number of readings staged at libraries and resource centres of learning around Florida.

On return to Dominica these three writers had a fire in their soul and the guild blazed but this was short-lived as the Caribana home was no longer available hence the lack of a proper meeting place saw the beginning of the demise of the Writers Guild.

By this time the seniors had all left and even before the blossoming writers such as Gloria Septra Augustus became formidable, as well as the youthful Yakima Cuffy, the guild disintegrated and activities resorted to the observance of World Poetry Day and submissions for the Independence short story competitions and readings, thanks to the work of Raymond Lawrence and the unyielding Harry Sealy.

The glory days of reading and organized debates by the Kiwanis, Lions and Jaycees Clubs and the dynamic youth councils, Small Projects Assistance Team-SPAT, Movement for Cultural Awareness- MCA, Aquarian Expression, Peoples Action Theatre all supported literature and expression; the New Chronicle before it got 'old", the Drum, frequent circulation of pamphlets with respect to social, political of health issues, the scripting of brilliant plays and memorable lines in "Speak Brother Speak", radio serials –"Green Gold" or the last local Easter play staged in Dominica "Jesus Christ Super-Star", all halted to a mere dribble.

The written word almost overnight lost its importance and value, "beff and tory" replaced facts and analytical discourse; well-structured song compositions were dismantled and became misdirected chants; "you" became "U"; books became a fan to cool the blazing heat; spelling or research was no longer an issue as the spell-check or an article written by someone else could easily be Googled; your passport to an A grade. Brilliant!

Obviously disagreements were no longer debated or agued sensibly as "your mother this and that" would be resurrected from the grave for mere things like not passing the football in a timely manner on the field of play or perhaps, worse still, the cutlass or gun, is used to end or maim a life all because of a little strife.

Popular on the radio is malapropism, poor pronunciation and enunciation, incorrect stress, inappropriate tones, while all political parties have their own radio and feel comfortable in peddling what they want without being unchallenged. We love to hear the American debate but its taboo to hear the PM do the same with the opposition leader or the shadow minister of education or health debating his counterpart. This essential element of a democracy is just for the Speaker's House where it can be controlled and expressions curtailed, rightfully if you are on the right side, and wrongfully if you are on the wrong side and so the real side, the decision side, is tarnished and now banished as truth resides in the one who speaks last or who can pay its cost.

The newly formed Waitukubuli Writers do have a tall order to get the populace reading again for it goes beyond simplicities such as the phone or the tablet; while other counties such as Barbados still read even if they do have the same devices. It's so complex that the internet children got rid or ate up the tablets government experimented with thinking these devices posed some answers. Well, clearly it did not. We still reside on George Orwell's Animal Farm.