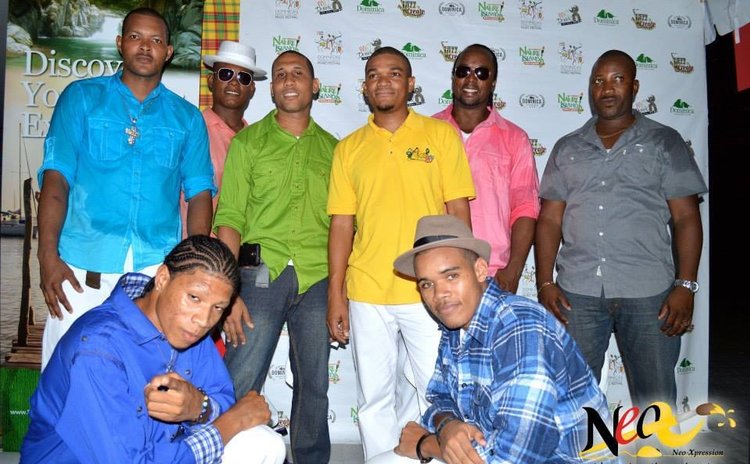 It all started less than four years ago and already the band has created an impact island wide as one of Dominica's most formidable musical groups. I speak here of the Xtacy Band of Petite Savanne. According to Manager Sherman Antoine, the band built its reputation and fan base by playing at small events in the community.

Xtacy has been motivated by and emulates the original WCK; they were careful to specify Jeff Joseph, Kassav and Carimi. Well, it is the latter which obviously has the greatest influence on the group, judging from their style and repertoire which is predominantly Haitian Compa. This genre was used as the band felt it was not sufficiently explored by other Dominican bands. Moreover, this genre showed up the bands creativity and uniqueness recognizing that Compa, Cadence and various Caribbean cultures are a melting pot.

Since Bouyon in its present execution hardly exhibits the dexterity of guitar players whether it be the bass , lead or rhythm , Xtacy seem to have chosen well as Odel Michael Hamilton the band leader/ founding member and lead guitarist really features skillfully on the guitar.

Other members of this youthful, talented group are Nehemiah Darroux, another founding member, on keyboards while Haran Francis is lead keyboardist and main music producer and director. Clyde Henderson is on drums while Dion Moses is entrusted to the lead vocals. Neville Eustache holds the rhythm together on the bass guitar and Maymond Esprit is on percussion, a much-required element in the genre of music the band specializes in.

I first saw the Xtacy Band on the beach at Mero, although I had heard previously that there was a good upcoming group who really played a decent Compa. Although the equipment and sound were limited, one could hear the obvious talent in the execution and, lo and behold, someone told me this was the Xtacy Band. As a musician, I was impressed and found that they sounded very much like the Carimi band.

At the just concluded Cadence festival, Xtacy musicianship was the best notwithstanding Serenade's experience, their flow from one song to the next and their brass compliment which lifted them to first place. However, Xtacy' musicianship/arrangements, vocals and the guitar licks of Odel did it for many and it must have been a close call in the end. I particularly loved what they did with Liquid Ice's"Pa tchew music la" one of the test pieces at the competition.

It is not surprising that the band found itself, before its fourth birthday, on Dominica's biggest stage where the performance was just as skillful in Cadence, Bouyon and of course Compa. Just as with Creole in the Park, hundreds of screaming fans wanted more and more from the "Shabine boys".

The group describes playing at the WCMF as "the show of a lifetime" and promises to be even bigger next time around when they are given the opportunity. So far the band has recorded two singles, the original "Compas Moutre Yo" and a Compa cover of John Legend's popular "All of me".

Xtacy members say they practice weekly in their small band-house in Petite Savanne and intensify things when engagements require. Manager Antoine said that his main aim is to mould the band into a professional act; hence, he is poised to accept constructive criticisms in this endeavor. I would say he is reaping some success already judging from what we have seen from this group whose member's average age is 25; the youngest is just 18. Such youth, yet such maturity in musical execution! There is no half-hour spread of the drum machine playing while musicians get themselves together or tune their instruments or the never ending irritant "testing ...one, two…testing." It's all about self-improvement of members, Antoine surmises.

Apart from aiming to be part of the Miami Compa Festival in the not-too-distant future, the band has its eyes set on its debut album release sometime next year. Meanwhile, as they take a short hiatus to work on their premier album release, Xtacy thanks the public for embracing them, vowing that their musical journey has "only just begun".