Bleak, cold winds to be endured by Caribbean footballers 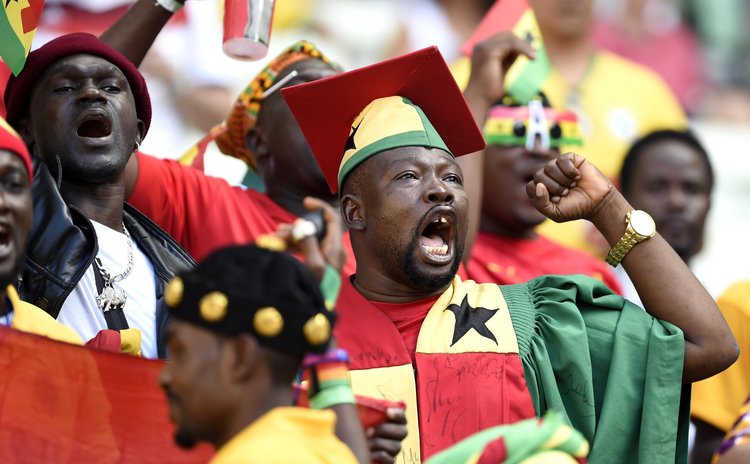 FORTALEZA, June 21, 2014 (Xinhua) -- Fans of Ghana cheer for the team ahead of a Group G match between Germany and Ghana of 2014 FIFA World Cup
By Reginald St. H Shillingford

Among the differing viewpoints surrounding world football is one that the FIFA move to increase the number of countries to qualify for the final stages of the World Cup Tournament should provide greater opportunity for the very small countries – inclusive of the Caribbean. In Brazil in 2014, there were 32 nations drawn up into eight groups of four, a numerical structure which has been in vogue for some considerable time. With the World Cup growing in global significance in each passing episode, it has become inevitable that the lesser developed fotballing countries would campaign to exercise a greater presence in the biggest tournament provided for team sports.

No country outside of South America and Europe has won the World Cup, and as the event gets nearer 100 years of participation both the African and Asiatic countries in particular are configuring to maximize their positions to avail themselves of expanded opportunities. But it is one thing to look at the World Cup stage as a broader one because of a larger number of the starting places and quite another when it is considered that some of the bigger actors will themselves be flexing their muscles more strongly to seize further portions of the spotlight. Thus, Mexico, U.S.A, Costa Rica, Chile and a few others within our hemisphere will obviously be looking to bite off larger chunks of the enlarged cake. The question, then, is how does the Caribbean figure in the scheme of things? And, I dare say, is Dominica conceptualizing to escape the brand of the ridiculous no hopers or evolve into candidates to break, into the sophisticated ranks of sublime innovators looking to lift itself by its bootstraps?

Knowledgeable people have headlined the very provocative saying: "losing is a habit!" When you pose the question about Dominica's prospects for football progress in the meaningful sense they will in the subconscious be prejudiced by the historical knowledge of our succumbing to Mexico at San Antonio, Texas and at Guadalajara by respective scores of 10-nil and 7-nil. That was over twenty years ago. Have we benefitted by the experience, or have we become paralyzed by it? It is difficult to truly say. However, we certainly have not been making a habit of winning, and of late we have suffered adverse results even against regional territories very little known for prowess in football.

This latter is unfortunate and hastens the view that we have not come to grips with the exact nature of our football dilemma and, of course, how best to deal with it.

Given an acceptance of changing times, one still cannot easily feel a sense of comfort when we see the grotesque evidence of totally unpopulated spectator stands when league matches are played at the national stadium. People unhesitatingly tell me they cannot justify leaving the comfort of their homes to go to watch what they call "pure nonsense"! Then, the callously unsympathetic are not against telling you they can see the likes of the top European clubs on television without paying a cent! They uncategorically condemn our local league football as scandalously low in standard of performance.

These are people brutal in their frankness. Yet, I turn briefly to another sport for a parallel opinion on a matter very dear to Caribbean hearts. Famed West Indies fast bowler Sir Andy Roberts when asked about one week ago for comment on the somewhat exciting regional 50 overs a-side tournament, he issued the caution that the players looked good playing among themselves. It took very little effort to read between the lines that Sir Andy was fearful those same players who looked good would be exposed in tearful fashion against superior opposition.

Back to football. If our players cannot manage to look good among themselves, how likely are they to measure up against more highly approved opponents? The old saying "there is no substitute for skill" is imperishable. And, believe you me, nothing of quality can emerge in football, wherever you view it, without a minimum level of player and team fitness. Please do not misconstrue the significance of the term "minimum" in the context in which it is now applied. Paradoxically the sense attaches to the term "maximum" as a useful application.

Players, when unfit, lose all their coordination, all skills, all sense of purpose, all composure and ability to be in the right place at the right time. Against tolerably fit opponents they feature as unfortunately misplaced specimens, more likely wishing they would be somewhere else far more comfortable. That's how they struck me during the last few regional encounters at Winsor Park.

Moving the clock fast forward, let us miraculously presume we can transform into a decent modern footballing unit. What would be the prospects facing us down the road? We will have a few players who will be in demand to move to occupy places in metropolitan clubs in USA and Europe. That will be great for those players. However, Dominica will still be behind in its run towards the World Cup! The experiences of Jamaica, Trinidad and other territories who have to rely on their transplanted players provide undiluted data. Jamaica is yet to win a match in the final phases of the World Cup Tournament and Trinidad is yet to score a goal at that level.

Dominicans playing in the metropolitan leagues? Bring it on! But to expand our outlook within a commendable dimension we have to magnify our ambitions more than just merely to a factor of having the odd outstandingly talented individuals. We have to achieve an outstanding talented domestic football league as a whole. The genetic material is there. Always, it is a matter of what we do with it. Inevitably, the "what" does not rely on our making bliss of our ignorance! Ignorance is a bleak, chill wind that never blows any good! Ours is a choice of looking hopefully forward or despondently backwards!