A glorious stalwart passes from our midst 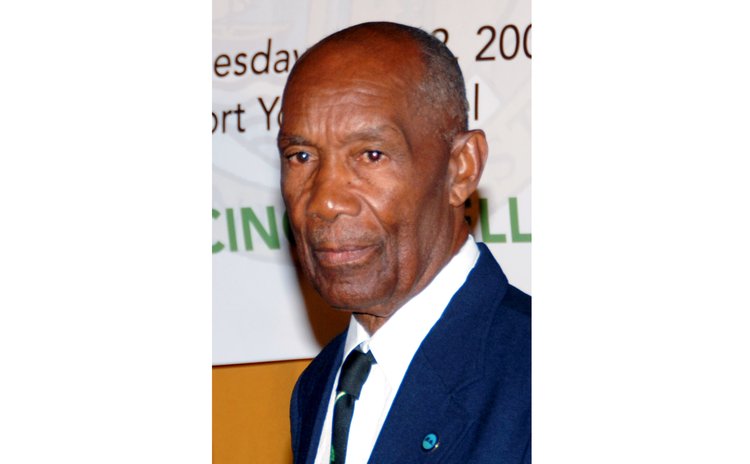 Although we sensed a growing frailty, we were lured into a feeling of permanence surrounding his reassuring presence. It could have been the unmistakable ring in his voice, the heartiest peal of his laughter reducing the imagined grandeur of those who took themselves too seriously, all this and a lot more went into the image I have of Allan E. Guye. This extraordinary footballer, but a wonderful man, passed away a week ago. Windsor Park was the centre stage upon which I was so strongly impressed with him during my formative years when so many of us youngsters almost knelt in thrall of Notre Dame, the team which was such a household name in Dominica's football. What a personage! Every thinking boy privileged to kick a ball secretly wanted to be a future Allan Guye but discretely preferred to avoid disclosure at harbouring so lofty an ambition.

We all knew there were great men around him. Equally, we were aware of him as the catalyst making them tick. So, Sharpe Elwin the legendary winger, no one better at doing what he did so well in taking the ball centrifugally on the right, Phillip Reid of the quicksilver dribble whose movement on the ball is better illustrated by the flickering illusive twinkle produced by a child toying with a piece of mirror in the sunshine, his brother Joe with the rippling thighs, imperiously working his way in disdain of a million tackles, then the youngest brother Alec, as gifted a master fullback as anywhere in the world has seen, all these and more around him, it could be said he Allan was the clockwork that ushered in the magic of the moment. Invariably, when Notre Dame scored, Allan Guye had a hand in it.

Without a descriptive preamble to the makeup of our football in those days the present day reader would go without useful illumination. Football was indeed a contact sport and all footballers prided themselves in being real men—not two-footed creatures given to lying down and craving the protection of a referee at the slightest hint of a skillfully applied robust shoulder charge that sent the victim flying uncontrollably! The currency expressed itself in the established understanding of "you certainly got me this time, but my turn will come in due course!" Referees smiled at the expression of true power in the shoulder contact, and they operated before the yellow or even the red card was invented.

System of play was also different. In front of the goalkeeper were two fullbacks. Ahead of them were three halfbacks. Guye played at centrehalf, considered the most demanding position in football until the early 1960's. The game was so dominated by the attacking spirit, there were five designated forwards: a centreforward flanked by his inside right and his inside left, and completing the lineup were two permanent wingers at the right and left flanks.

Guye played what was called the roving centrehalf. One minute he was blocking or heading away a ball from his goalline. The next he was up in midfield distributing the ball with absolute ease. But don't think of him as solely a defender and a provider. He could kick at goal. And what gave him that lethal ability? As boys we crowded around our idols when they walked up to the park. We clustered close by to see them put on their boots. From such a vantage point we were amazed at two things. Guye's feet were relatively short. Next, his insteps, the opposite of flatfoot, were high. You couldn't have a better equipped physical assemblage for power shooting in the groundblast zone! A penalty kick by him brought forth nothing in the mind of the opposing keeper of his unfortunate predicament. Dear life was something to be cherished!

Any questions as to his football origins? It is understood Guye lived as a boy at Pottersville. Those were the days when Goodwill was only a farming area and not yet a housing estate. Some of his early football experience was gained on the Pottersville Savannah and the rest at Newtown Savannah where he came under influence of the legendary Cuthbert McIntyre who was a teacher at the Roseau Boys School. Needless to say, much of McIntyre's preoccupation with precise ball distribution was avidly absorbed by Guye, always the connoisseur of excellence.

Guye's greatest abhorrence in football was the player who tended to regard possession of the ball as mere opportunity to put on a grand display of dazzling skills. His idea was the team's importance as fundamental—to win first and to entertain after. Perhaps his greatest goal for Dominica—at least in the opinion of most who saw it—was the volley to beat H.M.S.Diadem 1-nil at Windsor Park. It was deemed absolute perfection!

Guye's value to Dominica's football lay in the legacy of his being part of keeping football alive, along with several other stalwarts, at a time when so many outstanding players migrated overseas in search of greener employment pastures. It was a time of the middle and late forties. Guye certainly sustained a high standard of performance.

In other areas of sport Allan Guye was good enough to represent Dominica at cricket. However, it could be said that that sport was relatively too sedate to offer him the scope that football did in the effusive expression of his spirit. A lifelong avocation with him lay in his fervent love for contract bridge at which he represented Dominica regionally and happily hosted practices at his residence. Dominoes with Swansea Club at Potterville had been one of his favourite pastimes.

Later in life Guye was enticed by Dame Eugenia Charles to divert from his position with the Division of Agriculture, where he served as leader in the farming extension services, to enter the realm of politics with the Dominica Freedom Party. This led to his assuming office of Minister of Agriculture. His admission to me was that he acted as Prime Minister in absence of the Dame in view of her concern with restricting the supposedly unbridled ambitions of some of her colleagues. Guye himself stayed close to his abiding love for backyard gardening and poultry rearing.

For me, I will miss his instantaneous open invitation to myself to come and chat on his back porch at upper Goodwill which provides a grand vista of Windsor Park, Grammar School, Botanic Gardens, Roseau and Morne Bruce. Saddest concern with him always hinted at what he saw as the long lost art of humility—and conversely, the growing evidence of proof among us that G.B.Shaw's assertion that "politics is the last refuge of scoundrels" can hardly be disputed! I offer profound condolences to his dear wife Evelyn and the rest of his family inclusive of daughter Genevieve, a former national netballer and son Irving, a former Dominica footballer and sprinter. Dominica remains poorer for not having evolved more men of the character and spirit of the late Allan E. Guye. May he rest in the peace of heaven and glory of the beloved.