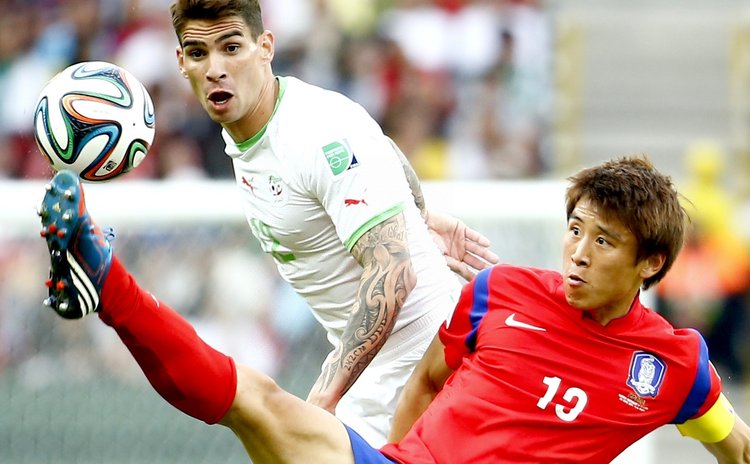 Islam Slimani, Rafik Halliche, Abdelmoumene Djabou and Yacine Brahimi scored for Algeria. South Korea, who finished the first half without any shot, dashed out with a strong second half, but the effort was still not enough to turn the match around.

South Korea had kept an undefeated record against African team in the previous World Cups, having beaten Togo 2-1 in 2006 and drawn 2-2 with Nigeria four years ago in South Africa. However, the record came to an end after Sunday.

Algeria, who was facing an Asian team for the first time in the World Cup, planned a five-defender formation, but their attack was much more threatening than the opponent.

After a long spell of possession, Les Fennecs caused trouble in the South Korean area in the fifth minute. Sofiane Feghouli was taken down in the box, but his teammate Yacine Brahimi's follow up went beyond the bar.

In the ninth minute, Algeria saw another chance through a corner kick. Islam Slimani found himself wide open but his header turned out wide off the left post.

South Korea started to counter attack after ten minutes, but Algeria still controlled the match. Aissa Mandi sent a great ball into the South Korean box in the 22nd minute. The ball found Slimani but the Sporting Lisbon striker didn't have the chance to finish his attempt.

The first goal came in the 26th minute, Slimani caught the long pass between the two South Korean defenders. He dashed into the box and tipped the ball over Jung Sungryong.

The Algerians didn't wait long for their second goal. Two minutes after the first goal, center back Rafik Halliche made use of a corner play, heading in the ball to set Algeria a 2-0 lead.

South Korea tried hard to fight back, but the counterattack of Algeria resulted in goal again. In the 38th minute, Slimani caught another long pass, and sent the ball to Abdelmoumene Djabou, who was undefended. Djabou seized the chance, netting the cross to make it 3-0 for Algeria.

South Korea opened the second half with a 50-minute goal. Striker Son Heungmin picked up a pass, broke the defense and powered a shot through Adi M'Bolhi's legs to take back one goal for South Korea.

The Asian team was inspired by the goal, making consecutive attacking efforts, and the Algeria defending line was under pressure.

After refusing several high-quality shots from South Korea, Algeria finished another counter attack with a goal. In the 62nd minute, Brahimi and his teammates completed a break through the South Korean defense. Brahimi's easy shot went past Jung Sungryong, and Algeria extend the lead to 4-1, becoming the first African team to score four or more goals in one match.

South Korea refused to give up. Koo Jacheol made a strong finish after a string of passes and cut the gap to two goals again in the 72nd minute.

South Korea kept the aggressive pressing, but they were unable to score again