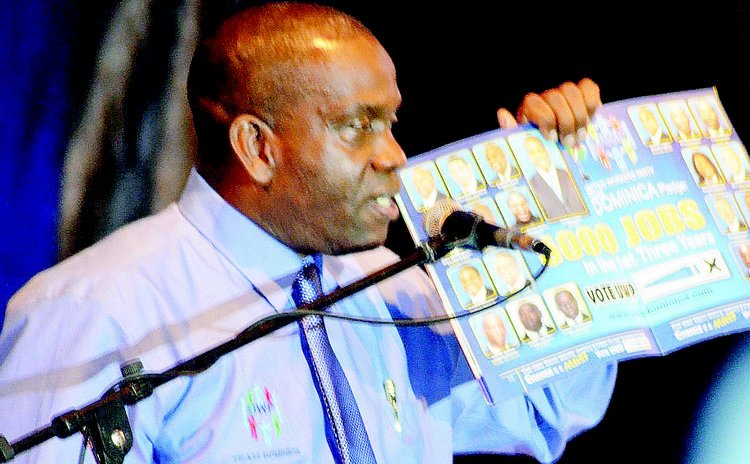 The promises they've made!

"Cabinet will be downsized from 16 to 10 ministers and all politically created advisor positions will be eliminated."

The assurances they've given!

"A limit of two consecutive terms for anyone serving in the office of prime minister."

The plans for Dominica under a United Workers Party (UWP) government, if elected, outlined in a 72 page manifesto of pledges, promises, philosophies and proposals, entitled "Becoming the Best".

Their philosophy is evident from the very start where, on the cover, are a single photograph of two women and 19 men, all dressed in black, all seemingly meaning business. And one clear message: This isn't about one man, this is a team. Lennox Linton, the leader of the pack, sits at the middle, at the centre of it all but hardly noticeable amidst the sea of black.

You won't see Linton splashed all over this one, you'll hardly notice him

Only once – on page 6 – will you see him without the remainder of the group, and even here he's holding a boy, who, himself, flies an umbrella, as if to suggest protection from the elements.

You'll see him again, on page 36, but with the other UWP candidate. There, he isn't identified as the political leader, simply as the candidate for Marigot. However, his photograph is more than twice the size of any other on the page, telling its own story.

Otherwise, the pictures throughout the document try telling stories. Stories of successes past, and successes promised.

The manifesto is dubbed a "social contact" with Dominicans, one that the UWP says is designed "to rescue and rebuild" the country.

"With the largest Cabinet of Ministers in the Eastern Caribbean Currency Union over the last 15 years we have been last in economic growth, last in agriculture and tourism performance, last in job creation, last in foreign exchange earnings and last in attracting Foreign Direct Investments. But we have been first in selling our passports to international crooks and criminals and first in employing non-nationals to do jobs that nationals are capable of doing," Linton writes in his introductory message.

To press its argument that the party is qualified to lead a revival, pages two to four are like a journey down memory lane as the party checks its achievements during its four-and-a-half years in office. There's the opening of tourist offices in New York, London and Paris, the establishment of diplomatic ties with Cuba and the introduction of the World Creole Music Festival. But most of the listed achievements are in the areas of infrastructure, along with agriculture and education.

The promises made are many, but few are new, the high point being the facilitation of a medical marijuana industry.

Like the Labour Party, the UWP again pledges to build an international airport, which it says is "indispensable" to Dominica's sustainable development. It also boasts of being "the only party that has taken material steps towards implementation of this important economic infrastructure."

The airport is one of many "goodies" being dangled before the tourism sector. Others include reducing the VAT on the hotel sector to 7.5 per cent and doubling tourism's marketing budget.

There's also a pledge to "marry" tourism and agriculture and to double agricultural production in its first three years in office.

"UWP Team Dominica will increase its investment of the financial, technical and other resources in agriculture, including direct support to farmers, in order to double agricultural production in the shortest possible time…In addition to revitalizing our traditionally successful agricultural products, we will reopen the sector for successful niche business in select global markets for high value products like coconut oil; cocoa; essential oils – bay oil, vertiver, patchouli, lemon grass and wellness herbs like industrial & medical marijuana, ginger, mint, cumin and basil."

On everything from housing and infrastructural development to manufacturing, a "green economy" and health care, there are promises to make it easier to do business and to operate, and assurances of tax cuts.

The Kalinagos are promised a five star eco resort, an official residence for the chief and a cassava processing plant, while the youth are told they will get "sustainable" jobs.

Public servants are guaranteed a six per cent pay rise for the three year period ending in 2105, the funds for which, the UWP vows, will come from cuts in "wasteful spending on an oversized Cabinet of ministers; an army of useless advisors and political appointees; excessive travel; and unnecessarily high utility bills."

However, occupying top spot in the manifesto is the creation of "a new economy" which the UWP swears will grow by 5 to 7% per year and produce 5000 "new sustainable jobs" within its first three years in office. It says this will be achieved by "creatively rebuilding" major economic drivers, including agriculture, tourism, manufacturing, construction, financial and information and communication technologies services, sports, culture, renewable energy and water-based industries.

There's an overwhelming feeling of blue in this document, in everything from backgrounds, to text to the uniforms of girls on a netball court. Except when they're in black, like on the final page where several of the candidates are holding hands with their arms raised and the words "Rising for Change" competing for attention.