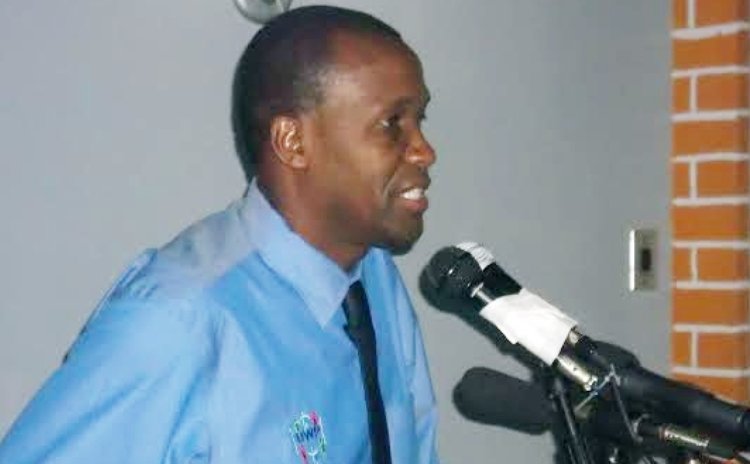 Dr. Thompson Fontaine at a meeting with members of the private sector

According to the United Workers Party (UWP) candidate for the Grand Fond Constituency, Dr. Thompson Fontaine, agriculture, construction and tourism will be some of the key sectors to revitalize Dominica's economy.

Dr. Fontaine explained UWP's strategies during the presentation of the party's manifesto to members of the private sector on December 2, 2014 at the Fort Young Hotel.

He added that there continues to be a decline in the agricultural sector and due to that there is no significant growth in the economy.
"We see a continuous decline in agriculture along with banana exports continuously declining that is part of the reason why we have the situation of not strong growth in economy," said Dr Fontaine.

He explained that the UWP in order to revitalize the economy have established pillars on which the economy will be based.

Dr. Fontaine noted: "That is our major focus how we can stimulate economic growth, major emphasis on our key sectors of agriculture, construction, manufacturing, tourism and services sector that will be our initial focus."

He indicated that UWP will be moving into manufacturing and will be looking forward to engage the private sector in this initiative.

"The first thing that need to be done or a review of the whole tax structure…we need to looking into lowering the income tax rates, that would be our main focus and again how best we can aid the private sector to begin to expand, to begin to improve."

He further stated that the removal of duties and taxes on the construction materials would be done in the first instance to begin to generate some kind of growth within the economy.

According to Dr Fontaine Dominica is a relatively small country therefore if funds are generated at a rapid pace it will, most likely, affect all the other areas of the economy.

He further mentioned that within the first few months in office the party hopes to stimulate massive construction activity in order to generate employment from the construction sector and create income in other sectors of the economy.

"The impact of that is that these are individuals who will be spending the money in Dominica; we expect that more income in circulation will impact the services sector, the banking sector, the insurance sector and other services like the retail sector," said Dr Fontaine

"The construction sector plays that kind of role to kick start the whole thing," he said.

In addition, another key sector of high importance to UWP is tourism. Dr Fontaine said the party has plans to expanding the marketing budget and reintroduce Carnival Cruises on a weekly basis.

"You will see, in terms of the hierarchy, in terms of importance, we are looking at firstly agriculture, construction, tourism, not necessarily in that order but those are the key areas we focused on," he said.

"With regards to tourism expanding the marketing effort and immediately we have talked about increasing the marketing component budget for Discover Dominica; that is important because if you want people to come to your country they have to know of the country."

He said that Dominica has less than a 1000 rooms and he "finds this unbelievable in an age where travel is the number industry in the world."