UWP to Police Chief: Stop the bribery of voters 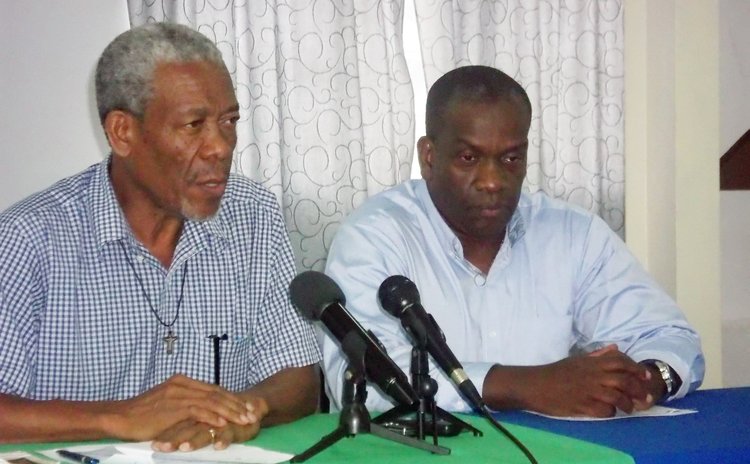 As the United Workers Party (UWP) continues its fight to have free and fair elections on December 8. 2014, it is putting all efforts into halting the importation of alleged illegal voters and filled a formal report to the Chief of Police Daniel Carbon on December 1, 2014.

"We focus today on the illegal importation of voters; it's a major concern we have going into the elections on December 8, 2014," said political leader Lennox Linton at a press conference earlier this week.

Linton stated that for some time now the Dominica Labour Party (DLP) has been partaking in activities that are contrary to that of the House Assembly Elections Act and that it continues to import overseas voters.

"We are specifically concerned about the clear breaches of Section 55 which speaks to the issue of bribery of voters which the Labour Party continues with a pace with its plan to bring in a number of voters, overseas people who have been out of Dominica for more than five years and whose names therefore should not be on the registered voters list but whose names are there," said Linton.

He added: "The other more serious issue is to deal with the bribes involved specifically paying the air fares of people to move from another country to Dominica and giving them spending money while they are in Dominica."

Linton said that whilst the diaspora begin to arrive with the intention to vote the Government has instructed that the security be heightened at the airport to protect these people.

"We now understand with some of these voters beginning to arrive from overseas the government has instructed the police authority to provide extensive security arrangements at the Melville Hall Airport for these Dominican nationals leaving overseas who coming in to vote having being bribed by the Labour Party," he said. "It concerns us that the police authority having been protecting those who wish to involve themselves in the criminal activity of bribery to vote which are against their clear provisions of the law."

In effort to put a stop to this, Linton stated, "So today we filed a formal report of criminal offenses in relation to the December 8, 2014 general elections with the chief of police and requested his immediate prevention and or investigation and prosecution of these criminal offenses."

The three page letter to the chief of police stated: "We together and severally, report for your immediate action, some very disturbing events, activities and circumstances, by which we have come to the unshakeable belief, that persons in the leadership of the Dominica Labour Party have, in concert with other persons in Dominica and persons abroad, engaged and are continuing to engage, in a criminal conspiracy to pervert the purity and integrity of these elections."

According to the letter sent to the police there are two Dominicans residing overseas who are agents of the DLP who are offering other Dominicans plane tickets and other inducements.

He concluded by noting that he urged the chief of police to instruct the immigration officers to put the necessary procedures in place for the persons entering to vote illegally.

"We are strongly urging the chief of police to instruct every immigration officer in every port of entry the issue the necessary preventive warnings to persons entering the state intending to vote in these elections in contravention to electoral laws of this country," he said.