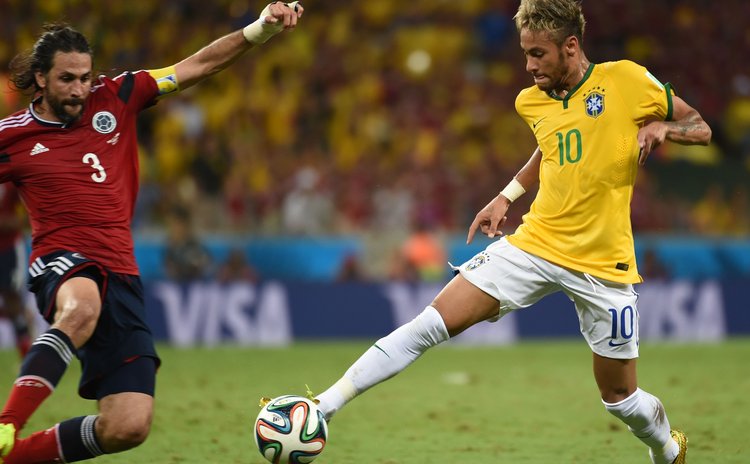 Germany became the first team to make the last four in an earlier match here edging France 1-0 with Mats Hummels scoring the sole goal with a header.

Brazil's two goals from two center backs Tiago Silva and David Luiz, who scored in each half despite James Rodriguez converted a late penalty.

In the 7th minute, Silva gave his team a comfortable lead as he bundles the ball to the back of Colombia's net after Neymar whipped a left side corner kick into the middle of the box.

Luiz gifted Brazil 2-0 lead as he hit a 35-yard free-kick into the back of the net in the 69th minute. Rodriguez converted a penalty kick in the 80th minute, but it was too late for the Colombians.

Brazil's early lead sent the Estadio Castelao into a frenzy atmosphere by more than 60,000 fans and the home team kept the pressure on their opponents.

Neymar was doubtful for the next match as he went down under Zuniga's challenge in the 84th minute. The Brazil's top scorer looked in pain and was carried off on a stretcher.

The host team is already sure to lose their captain against Germany as he was booked in the second half with a silly foul.

Germany, who made the last four at four consecutive World Cups, also extended their unbeaten run to 16 matches, the longest of any team competing in this tournament.

Germany coach Joachim Loew vowed to take a further step beyond the semifinals.

"In the last four World Cups we've reached the semifinals," Loew said at his post match press conference. "That is a good achievement (but) we now need to take the next step."