Can Serena raise the bar? 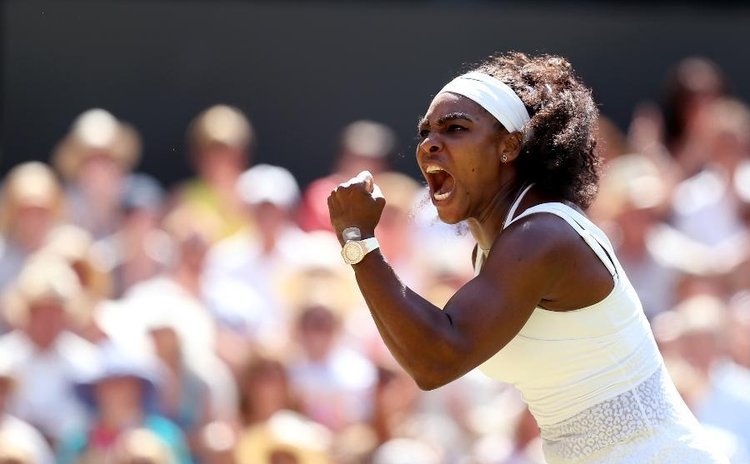 To the great majority of commentators and both the live crowd at the U.S Open, added to that many millions on world-wide television, were looking upon Serena Williams in her semi-final match against Ana Pliskova as nothing more than a formality en route to her coronation as the undoubted queen of tennis. Serena was seeking the coveted title that would mark her 6th as American Champion and her 23rd major crown which would place her above Steffi Graf as the best of all time, at least in the era of professional tennis. However, the old saying "there's many a slip twixt the cup and the lip" raised an ugly disappointment. Her opponent, known to have failed repeatedly to make it beyond the first week of any major tournament, became something transformed from the original ugly duckling going on to win in straight sets 6-2, 7-6. It was the only the second time Serena had dropped a set in this year's U.S. tournament.

Very early in the match former leading U.S player Pam Shriver declared Serena's difficulties to be largely due to bad scouting of her opponent. The gangling 6ft 2 in Czech player had bypassed the Rio Olympic Games specifically to prepare for the U.S Open and she looked very well prepared indeed. Her serves were fairly consistent, powerful, and her groundstrokes very precise and full of penetration – a huge number landing deep in the corners of the court. Ominously, Pliskova looked as if she had become Serena-like and came well equipped to press home every advantage. Million dollar question: what could Serena have done to effect escape from the clutches of disaster, as she had done repeatedly in the past? It would seem not much – without the necessary scouting, possibly a requirement of a seriously changed outlook.

Both offence and defense created very special challenges for the 34 year old empress of the tennis courts, not a situation readily overcome via split second adjustments, at least in the light of what her game presents as its unwavering blueprint. With things going well, Serena's matches are reckoned to last not more than about two hours. The greatest advantage is the quality of her serve. But apart from the very opening of the match, she fell victim to the pressures of glaring waywardness of her first serve. This was hazardous in the extreme against someone adept at smashing back her returns to rather very awkward areas of the backhand sector.

The first set scoreline of 6-2 was distressing to Serena supporters, and they were wondering how long a turnaround would last against the dominant Pliskova. The latter looked fresher and her guns were well loaded to keep Serena off balance for more than the aging Champion seemed able to bear. A change in tactics demanded that Miss Williams should vary her serves – not allowing her opponent great predictability. That, though, is easier said than done. Abandoning what has worked for you consistently is not the easiest thing to do, especially in a crisis of overwhelming proportions!

Then, too, a measure of the stress factor revealed itself in the large number of unforced errors Serena made, often hitting into the net from highly advanced positions. And an inability to clinch opportunities to break Pliskova's serve persisted as a sore problem. The Czech giantess simply refused to go away while Serena's woes just wouldn't cease either.

On the line of defence, the argument lent itself that returning Pliskova's service might have benefitted from the receiver standing back by as many as three or four meters. The obvious advantage here being a greater opportunity at reading the direction of the ball, offering means of returning it – using its own pace, along a safety first mechanism. Perhaps, as a mark of vanity Serena declined to buckle down to keeping the rallies long in hope of exploiting Pliskova's suspect mobility. Could be she was evidently concerned about her own lack of endurance.

A limp became discernible in Serena's movement, by which time the second set tiebreak etched its doom: and though Serena's magnanimity would not let her raise excuses of any kind, it became apparent she had not recovered from the defect to her mobility in the previous round she won in three sets against Simona Halep 6-2, 4-6, 6-3.

The titanic final expected between Pliskova and Angelique Kerber was everything it promised to be. The German did not fail to do her homework and sought to defuse the Pliskova booming serve and adhered to the business of making her run endlessly. She kept unforced errors to a bare minimum and stuck to her objective of getting as many balls back over the net, no matter how hopeless the situation. It paid off Pliskova was not outgunned but clearly outlasted by Kerber 6-3, 4-6, 6-4, taking home the money prize of $3.8 million U.S.

The men's final marked something of a disappointment for Novak Bjokovic of Serbia, beaten in four sets 6-7, 6-4, 7-5, 6-3 by the persistent Swiss Stan Wawrinka who notched up his third title in the majors.