Conservation of the Sea Turtle in Dominica 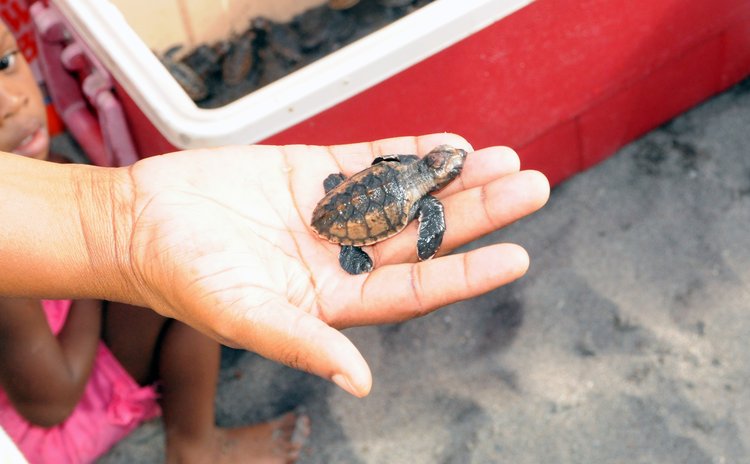 Turtle in the hand worth two in the sea?
By Dr. Emanuel Finn

Saturday May 23, 2015 was International Turtle Day. The theme of the day was to encourage people and raise awareness all over the globe to discover the world of turtles and tortoises and to learn how they can help to protect these shelled reptiles to thrive. This day was an excellent time and opportunity to educate people about how to care for turtles, and to learn what danger they're in. Turtles and tortoises are threatened by the exotic food trade, habitat destruction, haunting and global warming. In many areas around the world, the lucrative pet trade continues to contribute to the demise of turtle species. In many places around the globe, the day's celebration included dressing up as turtles, saving turtles on roads, or getting involved in turtle research.

Turtles are one of the most endearing and symbolic creatures of Dominica's native wildlife. Turtles not only fascinate each generation of children who find endless wonders under those hard shells, but they also continue to serve as a timeless role model in children's literature: the slow and steady turtle, whose patient progress always wins out against a fast but feckless competitor. Yet our connection to turtles hasn't prevented humans from abusing these creatures. In fact, many land, freshwater, and sea turtles are facing imminent threats to their survival because of human activities.

In Dominica turtles are listed under the Endangered Species Act because they are threatened and endangered. Constant enforcement and sustained double vigilance of turtles by the authorities and environmental groups across the island will result in turtle conservation and population growth. Back in the 1950, 60s and before the Endangered Species act, things were very different. It was common practice to haunt turtles for their eggs and meat. One of my best nostalgic and cherish memories of growing up in La Plaine was waking up at 3:00 am on some nights and heading towards the beach (Boute Sabre) with my grandfather to haunt Leatherback and Green turtles when came up to lay their eggs at the water's edge. At that time there was an overabundance of these creatures and conservation was not an issue.

There are a number of ways one can help these endangered and threatened turtle species. The biggest thing people one can do to make a difference is petitioning the government to preserve more habitats and reporting haunting and illegal sales of turtles to the police. One can help sea turtles with acts as simple as not leaving trash on the beach and keeping an eye out for them when boating or fishing in areas where they live. If you are near nesting beaches you should try not to disorient hatchlings, and refrain from spending time on the beach in areas where you can disturb them.

The good news is that a few community associations and individuals, especially on the east coast, patrol the beaches at night when the turtles come in. In the Rosalie area they also offer turtle watching tours. Everybody should be aware of environmental legislation and requirements that may be proposed by the government to protect these reptile species. Concerned citizens should connect with environmental organizations working to preserve turtles because they always know what's coming up and going on.