Roosevelt Skerrit launches his manifesto with much fanfare 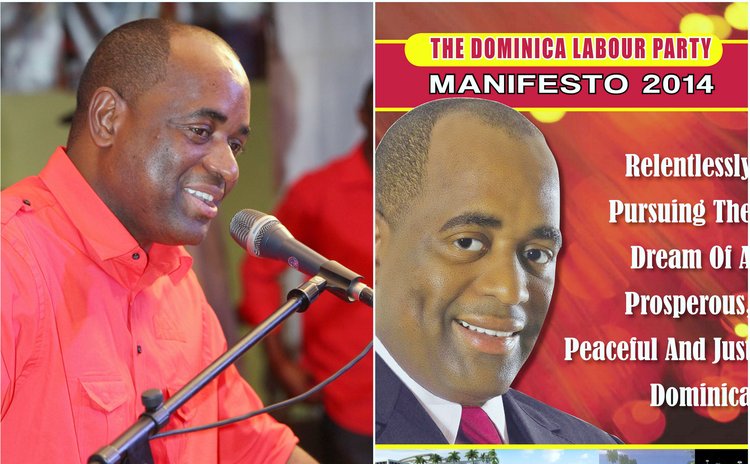 Skerrit,left, and cover of manifesto

The cover screams a thousand words, the face giving the impression of a portrait painted by Leonardo da Vinci, or a photoshopping genius. It's a blend of seriousness, fatherliness, control, youthfulness and experience. There's a tinge of a smile, one dimple standing out, and searching eyes that seem to follow your every move.

You'll see him again as you go through the document, once dressed casually in a red shirt and in his stride, once dressed in a handsome black suit standing next to the flag, once leaning over and shaking President Obama's hand.

The message is clear: this is a presidential contest of sorts, and here is your leader. And it isn't even subtle, for on every page, from cover to cover, is a small square with a shoe (the party's symbol) on the left, an "X" on the right, the words "Vote Labour" at the top and "Leadership is Everything!" at the bottom. One of these, pasted over what appears to be a magnificent, new cathedral, sending a subliminal message.

There's a lot of reminiscing throughout this manifesto – a history of the country's economy when the Dominica Labour Party (DLP) took power in 2000 and progress reports on various sectors and services over the past 14 years. There are also lots of colourful images, not only seeking to impress on the voters' minds the island's progress under Skerrit's DLP, but other developments to come. Like a striking new cruise terminal, the new Cabrits State Land Hotel, a new luxurious resort development and an expansive state of the art hospital which maintains the colonial name, Princess Margaret Hospital.

And there are plenty of promises and pledges.

"We are all united around the DLP pledge to you that we shall not give up our efforts to improve the standard of living and the quality of life of our people," Skerrit states in his introductory letter. "We will make Dominica prosperous, peaceful and just through Good Governance and a fair distribution of our wealth… We further pledge that we shall leave no one behind as we pursue the shared vision for Dominica."

On the economy, there are broad promises of "sound" fiscal policies and administrative reform, and everything from geothermal energy and eco-tourism to manufacturing. The economy will grow between five and seven per cent and unemployment reduced to five per cent, it pledges. And, of course, the perennial promise of an international airport.

"We shall build the long-desired international airport at Crompton Point with the help of our most supportive partner in development," it states, a reference to China. Lands purchased at Wesley (by the United Workers Party administration for an international airport) will be used for "urban expansion and industrial sites related to optimizing the use of the new airport."

On agriculture, there's a repeat of several promises made at various times and in various fora, including the purchase of a vessel to facilitate export of agricultural produce and to replace DEXIA with Dominica Export "to provide support for investments in agriculture, agro-processing and manufacturing, and the export of local products." Specifically, the DLP says it will grow the manufacturing sector's contribution to the economy to "at least" 10 per cent.

There are close to 20 bullet points dedicated to tourism, most of them broad and hardly anything new. However, the DLP promises to "work closely" with hoteliers to introduce condominiums and timeshare properties here and to spend more on marketing.

The biggest health project to be undertaken by a re-elected DLP under a 13-point plan is the already promised "modern and well-equipped" hospital, with funding from China. The party has also repeated its undertaking to construct a new Marigot hospital and to expand the Portsmouth Hospital, "under the management of Ross University."

The focus on education will be mostly the continuation of programmes, but Skerrit's DLP says it will establish a new polytechnic "to pursue excellence in Technical and Vocational Education and Training" and will make the teaching of civics mandatory.

The manifesto addresses housing, the youth, women, sports, the Diaspora, civil society and foreign policy, which will see more of the same. There's also a promise to give "urgent and serious consideration" to turning the Carib Territory into a tax and duty free zone.

The document is entitled, Relentlessly Pursuing the Dream of a Prosperous, Peaceful and Just Dominica, with the campaign slogan, Labour Ka Twavay (creole for Labour is Working) emblazoned all over it. Still, it suggests that this is a one-on-one contest, a presidential election of sorts. The cover tells the story.