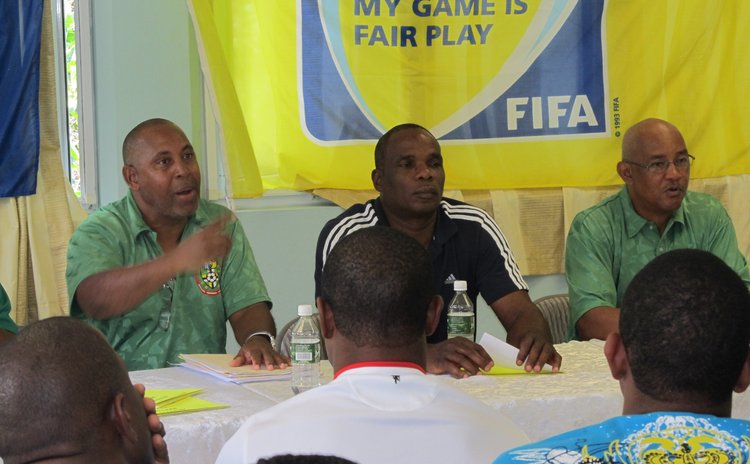 The Dominica Football Association headed by Glen Etienne, former national midfielder, outlined plans for the development of football, but as always not without challenges from other footballers.

Even before the DFA could get into its business which included approval of its audited financial statements for the year December 31, 2012, the President's address and matters arising from the preceding annual conference, former DFA president Dexter Francis engaged the AGM on matters of remuneration after having to resign in the course of his four-year term.

In fact, Francis served notice that he was taking his matter to court. He did not get much support from club and team delegates in attendance. And after nearly two hours of back and forth, the DFA took the position that Francis should leave and threatened getting the police.

Then towards the end of proceedings under matters arising and after the audited financial statements had been adopted, the question of the legitimacy of Glen Etienne as president dominated discussions. One argument being that if he automatically assumed the presidency of the DFA after Patrick John was suspended by FIFA, why wasn't the second vice president accordingly elevated to first vice president, which was the elected post of Etienne. The matter of first vice president was deferred to a special meeting in three weeks.

Etienne, in his address, informed delegates that Dominica's male Under-20 football team would participate in the CONCACAF competition this year. He expressed disappointment with the low turnout of coaches for the E Licence offered by The United States Soccer Federation earlier this year. President Etienne said he looked forward for better representation from teams for such events. He was also exploring having three coaches attend a Grade B course.

About 150 boys and girls aged 6-12 years took part in a one-day grassroots football programme at Grand Bay. Etienne hoped to have that grassroots programme launched in Castle Bruce, Marigot and Portsmouth, because the future administrators, referees and national players would come from these young people.

The DFA had plans to give all its players an ID card with numbers to facilitate players moving from team to team, and for players not to be playing for two teams in the same league.

Etienne remembered fallen football heroes Kirt Hector and Noran Jno Hope. He wanted something tangible to name after the two who died in a freak road erosion accident at Pond Casse on their way to a Windward Islands football tournament in April. Josly Prince who survived that accident was still under medical treatment with his next course of treatment likely to be in Trinidad.

The new 2013-2014 season is carded to start in August, added Etienne. The DFA Goal Project of a football field at Stock Farm was still in the works. Etienne hoped to have that projected completed as government and the DFA had gone into a lease agreement based on FIFA request.