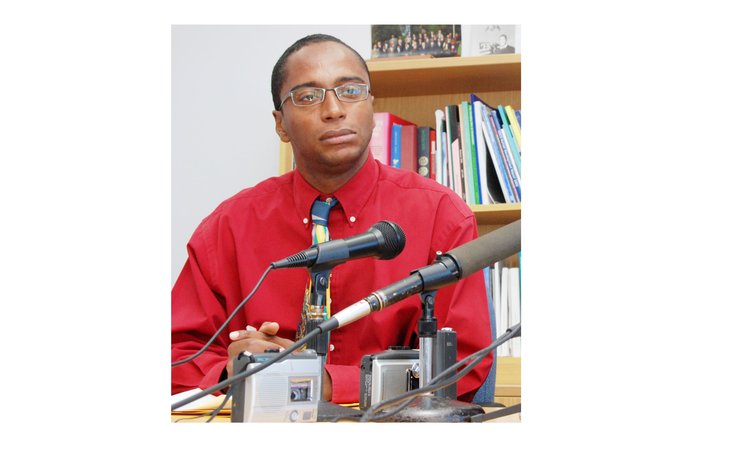 Sean Douglas attends a press conference as Press Secretary in 2007

Our beloved country, Dominica, is at a crossroads. At this critical time, voters must examine carefully the contrasting philosophies, policies and styles of the two political parties and their leaders. In the areas of economic performance, foreign policy and good governance, the Dominica Labour Party has failed to deliver in key areas despite fifteen years in power.

On the economy, Roosevelt Skerrit has little to boast about. On January 8th 2004, he inherited an economy well on its way to economic recovery following Dominica's graduation to the International Monetary Fund's three year Poverty Reduction and Growth Facility (PRGF) arrangement in December, 2003. Earlier, Pierre Charles had taken most of the unpopular fiscal measures, including the 4 percent stabilization levy and the 5 percent cut in nominal wages over two years.

Despite the government's success in attracting significant levels of grant funds from China, Venezuela and the European Union over the last decade, the country is not equipped to compete effectively in this competitive global marketplace. Gross Domestic Product (GDP) growth figures over the last five years have been extremely poor. In the period 2009-2013, real GDP growth averaged just 0.5 percent, well below the target of 3 percent. The Government continues to miss its primary surplus target of 2.4 percent of GDP. For fiscal year2013/2014, a primary deficit of 0.7 percent is estimated. There have been investments in agriculture over the last 15 years. Despite these interventions, the agricultural sector has declined significantly and this government has presided over the virtual collapse of the banana industry.

The tourism marketing budget for Dominica is insignificant. The investments made in the tourism industry in the public and private sectors have been too small to have a significant impact on the economy. After 15 years, Dominica has failed to attract a leading international hotel operator. We missed a great opportunity to get an international airport when Dominica switched diplomatic relations from Taiwan to China in 2004.

Much has been said about the level of infrastructural projects undertaken by this government. The physical landscape of the Pointe Michel/Soufriere/Scotts head section of Dominica has been transformed following the construction of sea defence walls and roadways. But the town of Portsmouth, which has the greatest potential to transform Dominica has been sidelined. A yacht marina was not built and the idea to build an ICT park at Picard has not materialized. The development of a Medi-Tourism industry in collaboration with Ross University has not taken off.

The principles which have been demonstrated by the Skerrit administration in the sphere of foreign policy are secrecy and opportunism. There is neither transparency nor accountability in the foreign policy framework of this administration. An example of naked opportunism is the decision of the Government of Dominica to abandon its support for the people of Western Sahara in their fight for self determination in favour of an oppressive monarchy in Morocco.

The Government of Dominica has over the years made many diplomatic appointments in total secrecy. These include the notorious Bahamian businessman, Dr. Rudolph King who served time in jail in the United States. He once presented himself to the Prime Minister of Bahrain as a Special Envoy to Roosevelt Skerrit. The Italian Government rejected the Dominica Government's choice of Francesco Corallo as Ambassador to the Food and Agricultural Organisation (FAO) because he was wanted by Interpol for organized crime/transnational crime and fraud. A Special Envoy of Dominica in the United Kingdom was jailed for fraud in 2009. Questions linger about the characters of ambassadors appointed by Dominica to Ireland, Spain, UNESCO and Slovakia. The economic citizenship programme has not been operated in an open and transparent manner.

A hallmark of this administration over the last decade is how corruption in public office has taken root in Dominica to the extent that the public has come to accept it and the regime does not even try to hide it. It is paradoxical that for a party that was voted into office on an anti-corruption platform is itself seen as corrupt and discredited.

The choice before the electorate at this election is stark. After 15 years of Labour rule, the Dominican economy is in deep trouble, kept afloat temporarily by grant inflows, subsidies and remittances from abroad. The social welfare programmes and election campaign funds mask the deep underlying problems in our country- that of inadequate foreign direct investment, declining activity in the agriculture, tourism and manufacturing sectors, the rising cost of living and the scandal of low pay. Gains have been made in some areas, notably infrastructural development and education. But overall, the diagnosis is poor and the prognosis does not inspire confidence.

The only alternative to this regime which is bankrupt, both intellectually and morally, is Team Dominica/United Workers Party. My decision to give critical support to the UWP has historical precedent. In 1979, progressive forces left the original Dominica Labour Party of Patrick John and gave critical support to the then Prime Minister, Oliver Seraphine of the newly formed Democratic Labour Party in the 1980 elections. In 2000, the two arch political rivals, Labour and Freedom came together in a tactical alliance to defeat the UWP.

In 2014, in an effort to save Dominica from tyranny, dictatorship and continued economic hardship, I support a change of government. I have not taken this decision lightly. My past criticisms of the UWP in government between 1995-2000 are valid. But we are not living in normal times. My loyalty is to country and not to party. In any event, the Labour Party under Roosevelt Skerrit has long moved away from the principles espoused by E.O. LeBlanc, Mike and Rosie Douglas and Pierre Charles.

Dominica is now at a crossroads. Lennox Linton does not have all the qualities I look for in a leader. In fact no political leader has all the qualities and attributes required for leadership. In this current situation I believe Lennox Linton should be given a chance. After years advocating for good governance in public affairs and pointing to the ills of the Skerrit administration on his radio programme, Between you and me , we can reasonably expect Lennox Linton to bring back cabinet government, restore the independence of state institutions, restore the supremacy of parliament and bring an end to the politics of spin and lies.

I sincerely believe that the new team of largely professionals, progressives and patriots the UWP has assembled, represents the only chance Dominica has to stop this utterly dishonest regime. It is my fervent hope that a new UWP government will restore honesty, transparency and integrity in government. I call on all voters to take note of the vulgar display of wealth in this campaign, the source of which remains a secret. It is the solemn duty of all Dominicans to place Dominica first when they cast their vote on Election Day, December 8th 2014.