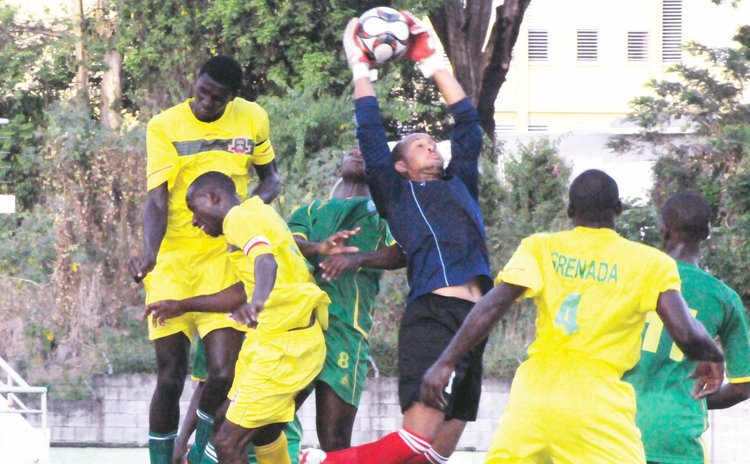 Grenadian goolkeeper makes save in the first match of the Windward Islands football tournament at the Windsor Park Sports Stadium on Wednesday May 30, 2014

Dominica's bid for their first and only championship since 1971 came unstuck early in the reckoning when St Lucia took that opening encounter with goals by Jalen Neptune and Eden Richards. Dominica had the opportunity to get back in the game, but a first minute second half penalty was missed; and five minutes into that second half a St Lucian received a red card.

The hosts needed to bounce back immediately next time out against St Vincent & the Grenadines but even as fans were virtually unimpressed that Dominica had conceded some 45 second in the first half the resultant free kick was ended by Kevin Francis. Fans woes were compounded when 14 minutes later Oalex Anderson finished off a corner kick to put SVG two goals up. Hope was raised briefly when Matthew Walsh homed a long hard right footer along the ground in the 20th minute of play.

Gloom again descended when Anderson on a through pass, placed his right booter along the ground to restore that 2-goal cushion in the 28th minute. Chris Lawrence scored for Dominica in the 41st minute for 2-3 score at the interval. That would be the scoreline by final whistle. SVG 3 Dominica 2.

Come the second half and in the space of 15 minutes down the stretch, Grenada struck four times through Frederick, Jake Rennie, Nicko Williams and Lindon Jules for Grenada to snatch a 5-2 victory.

St Lucia followed up with an ambushed 1-0 win over Grenada compliments Jalen Neptune in the 60th having long been reduced to 10 players five minutes into the second half. St Lucia and SVG played to a goalless draw. St Vincent were also involved in 0-0 draw with Grenada.

Points standing at the end of the tournament: St Lucia 7, SVG 5, Grenada 4 and Dominica 0.