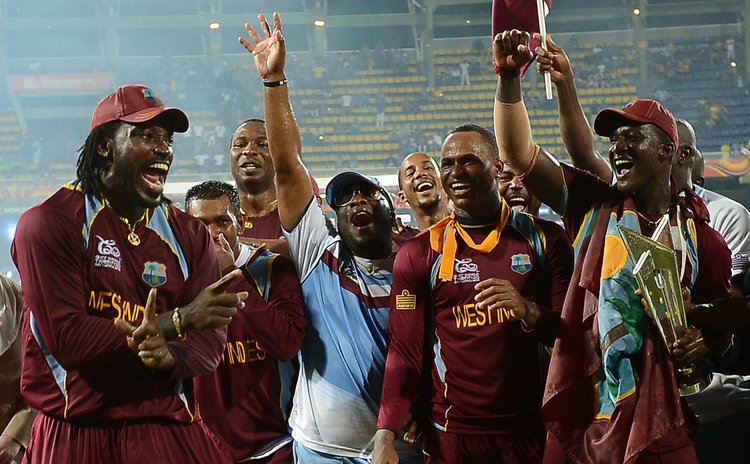 Everyone who is West Indian delighted in the sensational achievement of our capturing of the World Cup T20 on Sunday 3rd April. The climax came in a super blast-off with Carlos Brathwaite – he should now be dubbed BLASTWAITE – sending the first four balls of the final over into orbit, very well into the crowd of sixty-six thousand at the Eden Gardens Stadium in Calcutta. England had scored 155 for 9 wickets, a recovery of sorts after they were 23 for 3 in the 5th over – courtesy Samuel Badree who ended up on 2 for 16 and Andre Russell, the two making the early breakthroughs to set the opposition back on their heels. Eventually Joe Root's 56 and Buttler's 36 saw England to position of respectability. West Indies came to similar early grief, finding themselves on 21 for 3 wickets at the end of their fifth over, and it was left to the enigmatic Marlon Samuels to post a carbon copy of his rescue innings that won the 2012 tournament. He scored 82 then. This time he amassed 85 not out, finding himself face to face with possibility of defeat when West Indies stood at 118 for 6 in the 17th over and still 37 runs behind their target of 156.

It is common saying: "cometh the hour, cometh the man!" And so it was with Carlos Brathwaite, a relative newcomer to the team, and one who had not initially been slated into the proceedings. With 19 runs needed from the final over, the conversation between Brathwaite and Samuels must have been to the effect that the former would steal a single to favour priority of Samuels attempting to force home an unlikely victory. Joe Root, who had made early breakthrough for England, nor Jordan, generally their most dependable bowler at the death, were not unto the assignment for bowling the final critical over. That responsibility fell to Ben Stokes. His demise was dramatic in the extreme. Four sixes in four balls cascaded from Brathwaite hitting with uproarious power down the ground for a finale, the like of which has not been seen before. West Indies with 161 for 6 winning by four wickets with two balls to spare. Brathwaite's whirlwind 34 came in a mere 10 balls!

West Indies became the first country to win the T20 World Cup twice and provided a fitting double as the West Indies women earlier in the day had emerged champions in their final over Australia. All this was heralded a few months ago by the West Indies capturing the World Youth Cup for men. It is possible for these outcomes to usher much more than the feeling of euphoria expected to flow with the sensations of success. The tendency is for the Caribbean public to clamor for improvement when things go bad with our cricket at the international level. Just as likely, the flowering of a few good results will allow the zeal for progress to cool under the spirit of laissez faire!

However, as is generally felt, the essence of a proper outlook can surface from unlikely quarter. A young and comely bank teller drew me into conversation about the match which was everybody's talking point. My offer was to the effect that the match was sensational but…, she instantly butted in to add: "they (the West Indies) should have won convincingly!" You see the point. Though she was as happy as everyone else at the outcome hers was not merely a pretty face and a cordial personality. The young lady showed she had useful grey matter above her shoulders. And I had to concur with her sense of rationale. West Indies should have eliminated the headache of grave uncertainty by securing the match at a downright earlier stage.

Isn't it useful to ask what measures do we put in place to help eliminate the weaknesses, such as they surfaced, in various phases of our progress during the tournament? And, of course, how do we go about putting in place the technical necessities? Can we rely on the blessings of a fortuitous combination of affairs to bail us out of trouble? Brathwaite came from nowhere, so to speak. Lendl Simmons, originally sidelined from the squad through injury, was hastily drafted back into the side for the semi final against India to replace the injured Andre Fletcher, after Simmons made his return to India to prepare for the Indian Premier League! Simmons copped Man of the Match versus India by scoring 82 not out in which he enjoyed two reprieves via television evidence that he had both times been caught off undetected no balls!

Of similar bearing on West Indies fortunes in the final was the patent fact of Samuels having his "temporary" dismissal, caught by the England Keeper, overturned on strength of electronic evidence! Broadening our considerations, can't we allow appropriate room for salient attention to be given to our cricket development? The prominent people who matter have during the World Cup televised broadcasts emphasized the great need for West Indies cricket to improve overall to occupy a more rightful place on the international scene, particularly in Test cricket considered the more satisfactory in assessment of real standards for health of the game.

In our last episode in Test arenas we were outscored by more than two to one by Australia and beaten in three days and in close to two and a half days in real terms during weather affected scenarios! All this causes a loss of sponsorship – so very vital towards keeping cricket alive these days.

Sammy's outburst in addressing the world in his victory speech as captain alluded strongly to a virulent discord existing so long between players on the West Indies team and the board of management. It came at a time most of us would count as inopportune – when the attitude should have been one of overall rejoicing. Yet, it may easily have been the only time a candid review of longstanding woes could have secured the glimpse of due attention by an apparently intransigent board.

My impression of the president of the West Indies board is one of apparent retention of a tongue in the cheek, stonily seeking to pose miniscule petty politicking postures, and not by any means angling to meet deep seated issues with forthrightness and reasonable transparency. The world should be by now aware the West Indies team has triumphed in the World Cup not because of the board but in spite of a Board of atrocious ineptitude.

Coming down to it, there was the need for Emanuel Nanthan to appear in public as the board's vice-president to hopefully placate the players regarding an ostensible lack of warm support by the board over the signal achievement of the team in the World Cup. Far from a tacit resting on the World Cup laurels, it is imperative for very serious work to be strenuously and studiously undertaken to move West Indies cricket forward to where it ought to be. Congratulations to Sammy and his team and to Stephanie Taylor and the women's team. Their successes should usher in the way for realistic and patriotic soul searching on all sides.