If it looks like a duck it is a duck. Most observers say there will be early elections 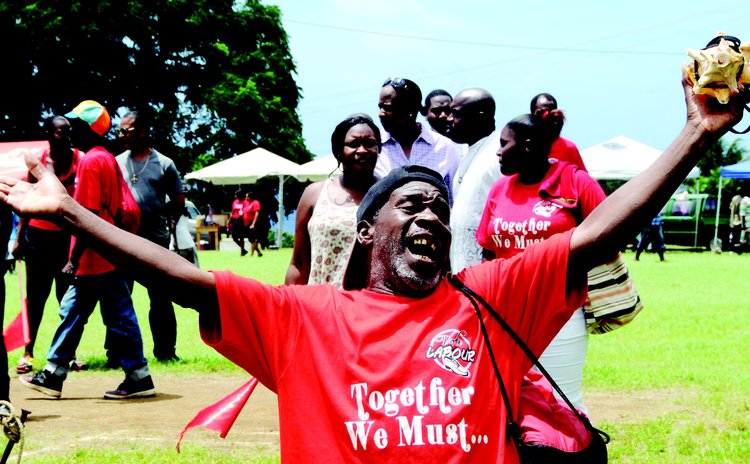 A happy supporter at a DLP Delegates Conference

Never mind the fact that the opposition claim his days are numbered; never mind their boast that his time is up.

Never mind the feeling among his detractors that Roosevelt Skerrit and his governing Dominica Labour Party (DLP) are living on borrowed time. The signs are clear that the prime minister has adopted the position that his government must live for the moment and survive on borrowed money. From China.

The revelation last week that Skerrit had signed a Memorandum of Understanding (MOU) with a Chinese company during his visit to Beijing last month for approximately US$300 million – mainly for the construction of an international airport and a hotel – heightened already widespread speculation that a general election isn't far away.

"I feel the election is close and this seems to me to be some kind of election (gimmick)," one person close to the DLP told The Sun in reference to confirmation by the prime minister that he was exploring construction of a jet airport.

Unlike 2009 when the "Election Santa" delivered the DLP leader a Christmas present of 18 seats, this won't be an "Advent Election", meaning it won't be held in December. However, sources either close to the DLP or, in one case, who work with the ruling party, have suggested a February poll.
Skerrit has perpetuated the frenzy by suggesting several times that he would call a snap poll. His most concrete declaration came at the DLP delegates' conference in Pointe Mitchel on 15 September where he implored supporters to get ready.

"I want each and every one of you to ready yourself for battle. Put on your best plate of armour and be ready to go into the battlefield and defend Dominica's honour," he said. A flurry of activity since, including a series of announcements and promises of job creation, appear to support his declaration.

But it's the latest news from China – and the prime minister's confirmation that experts from the Chinese firm are here to advise the government on the proposed site for the airport "and once they are satisfied, based on their independent assessment by the experts, then we shall move with the design phase of the airport", that stands as the clearest indication yet that a general election is around the corner.

And international airport is the sort of thing Skerrit can display on his doorstep as evidence that his government is working and needs yet another term – far from the omnishambles which the opposition paints the administration to be, one observer told The Sun.

There's no doubt that Dominicans would love to have an international airport, the source made clear. Any suggestion that Skerrit can make it happen will all be presented as a vindication of the great and powerful Wizard of Ros.

The suggestion here is that it would help win the DLP yet another term and the opposition United Workers Party (UWP) would have to sit through another term of Roosevelt Skerrit's electoral triumphalism.

However, the DLP will win the next election, anyhow, said Peter Wickham, the Barbadian pollster who has conducted surveys for the party. This was why, he said, he had difficulty understanding why the Dominican leader "seems to be determined" to call a snap election.

"I find it strange, I don't quite understand it," Wickham told The Sun in a telephone interview. "I don't think he will lose (the election), I don't think that is an option…my gut reaction is 'What's the sense of going early if you know you're going to win anyway?'"

The answer seems to lie in the UWP's rebirth, according to observers. Under the leadership of Lennox Linton, the opposition party has found fresh energy and is putting together a formidable slate of candidates, one person close to the DLP conceded. This, the person said, is a cause for concern.

"It's only eleven (candidates) I'm hearing about but the eleven they have, this is the best slate of candidates they have. It's their best team," said this person.

Wickham, on the other hand, while conceding that the UWP can only improve, said he did not believe the prime minister ought to be worried about the opposition. Still, he speculated, an early election would likely be influenced by the opposition party's resurgence.

"The obvious thing is to catch the UWP before they settle down," he told The Sun.

This is the very opposition that is so certain that Skerrit is living on borrowed time. For the Dominican leader, however, it's all about evoking the spirit of economic rebirth through a jet airport; it's about living, not on borrowed time, but on borrowed money.