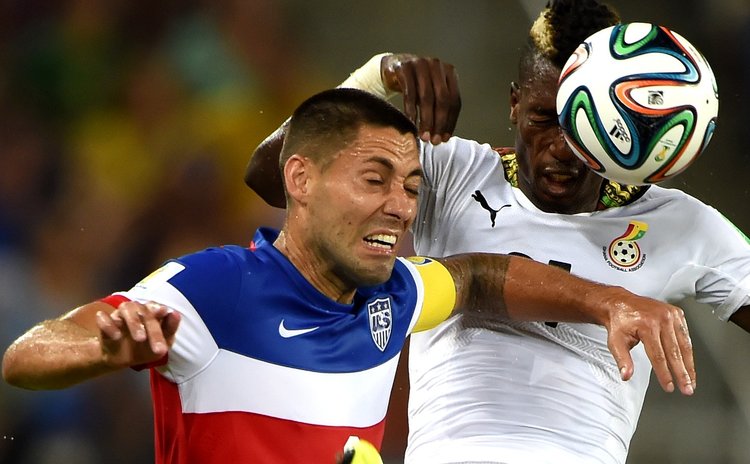 NATAL, June 16 (Xinhua) -- The fastest goal so far and a late killer in the final minutes awarded the United States 2-1 a win over their long-time rivals Ghana in a thrilling Brazil World Cup Group G match here on Monday.

Captain Clint Dempsey scored only 32 seconds into the match to put the Americans to the lead, but Ghana steadied themselves and gradually took back the possession of the ball. In the 82th minutes, Jordan Ayew equalised for Ghana, but John Brooks broke Ghanaian hearts with his late goal and sealed the three points for the Americans.

This victory avenged the United States' defeats by Ghana in the last two World Cups, as the American were beaten in group stage in the 2006 tournament and in extra time during the round of 16 four years ago.

In another match in Group G, Germany took an easy 4-0 victory over Portugal, which leaves the United States to rank the second after the first round due to goal difference.

Dempsey's goal is the fastest in the tournament after 14 matches played. In the first American attack, Dempsey dribbled into the area from the left side and fired past goalkeeper Adam Larsen Kwarasey to the far post. The veteran became the first American player to score at three different World Cup.

The fantastic goal made the American supporters in the Estadio das Dunas on their feet. Then Ghana began to possess the ball and find ways to break down the congested American midfield. However, goalkeeper Tim Howard relieves pressure after a couple of attacks from Ghana.

The Americans encountered an unexpected problem as their forward Jozy Altidore got injured in the 22th minute. He battled for the ball with Ghana's defender John Boye along the left side before immediately grabbing his left hamstring and falling to the ground. He lied down on the pitch in pain and was substituted by Aron Johannsson.

Ghana pressed hard afterwards for an equaliser and threatened the U.S. goal from time to time, but didn't have any luck while the Americans found it difficult completing their final pass.

In the 82th minutes, Jordan Ayew eventually equalised for Ghana. From a similar angle to Dempsey's strike, the Marseille man beat goalkeeper Howard at the near post. Ghana continued to pressure with high intensity.

However, the Americans eventually withstood the pressure as they retook the lead just four minutes after the equaliser. Substitute Brooks headed in the corner and the ball bounced just in front of Kwarasey, leaving the goalkeeper no chance.