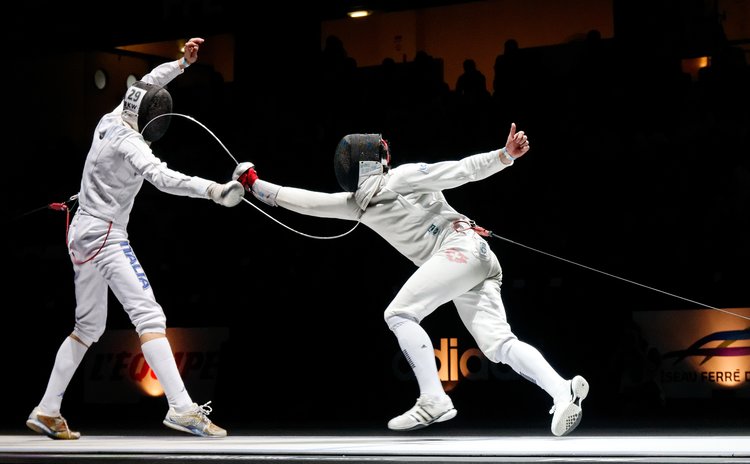 A potentially fruitful connection has arisen between embryonic fencers in Dominica and Barbados, giving rise to a group of fencers from the latter territory participating in Dominica's second national competition held at Al-Dive Bar and Diving Centre at Lallé Coco, Loubiere near Castle Comfort. This has taken place as a result of contacts made between Woody Lawrence, President of the Dominica Fencing Association along with Coady Norris, the leading Dominica fencer, with Kurt Straker, President of the Barbados Fencing Federation, himself an active fencer, when they took part at a recent regional fencing event. The following embodies a paraphrase of my interview with members of the Barbados group via their twenty-one year old Martin Jordan, one of their lead practitioners in the sport. Kurt Straker is nephew of Emile Straker who dynamically led the famed Merrymen singing quartet of Barbados.

How long has fencing been in existence in Barbados?

Its only in the year 2000 our group has come about. We formed the Barbados Fencing Federation. We include twelve school students.

Who sparked formation of your fencing initiative?

Ryan Rodrigquez got into the sport at Florida International University, then he joined one of the fencing clubs in Florida where it is popular. He then introduced it when he came to work in Barbados. Fencing is growing gradually among some families and friends but it is not quite a popular sport.

What is the frequency of training?

We practice three times weekly and we run a training programme at the St. Dominic Catholic Church Hall in Christchurch.

It is a tiled area of around 60 feet by 40 feet on which we lay out a competition rubber mat. Thanks to the Church Hall for allowing use of the space on Mondays and Wednesdays from 6 to 8 pm and 2 to 4pm on Saturdays.

It must have cost a tidy sum to equip yourselves

Yes, but the International Fencing Federation (F.I.E) has met the greater portion of our requirements, and the Barbados Olympic Committee has provided us with funds to meet costs of accommodation and meals when we travel to tournaments.

How's the level of interest in fencing in Barbados?

Mostly the interest comes from the St. Francis Boys Secondary School where we have staged an eighteen months training programme.

Is there much sponsorship available to you?

For promotional purposes we can rely on the firm of ANSA MC CAL, a group heavily involved in insurances and motorcar distribution. Of course, the Barbados Olympic Committee's assistance is invaluable. They also help with television exposure.

Have you engaged in public promotions of fencing?

Very recently we put on some fencing competitions at the popular PIRATES COVE, a beach restaurant and bar, which were very well attended. Hopefully we will get to the stage where we can put on features like fencing activity staged on top of motorcars!

Why do you think fencing can be a useful sport for young Barbadians?

It helps promote enhanced physical reflexes, prompt decision making and, of course improved discipline in the young person. In fact it seems to encourage better overall behavior. Incidentally, our association's approach to the University of the West Indies in Barbados has been rather encouraging in that the Dean Professor Barriteau arranged for us to meet with the University's Sports Faculty and we hope to generate useful development in fencing with their students in the near future. This comes about in view of the professor's outgoing enthusiasm in contrast to that of her predecessor.

Lastly, how much of an outreach can fencing engage in as assistance to other sports disciplines in Barbados?

Actually, most of our sports associations are bound in a narrow minded outlook. However, we see that fencing could be of assistance to ¬¬¬¬¬swimmers and martial arts athletes from the physical standpoint.

Our Barbadian Diaspora has not so far been engaged as, say, the Jamaicans with their Diaspora in the U.S.A. It will take some time before we can have, like them, more of our U.S born athletes coming down to represent us in the sport, and by so doing help in improvement of our performance standards.

It's a pleasure. We fly out later today but look forward to more Barbados-Dominica fencing activity in the future. We see this as just a beginning.

This column will carry in our next edition a look at the fencing competition itself.