"Final" in Group B to avoid Brazil 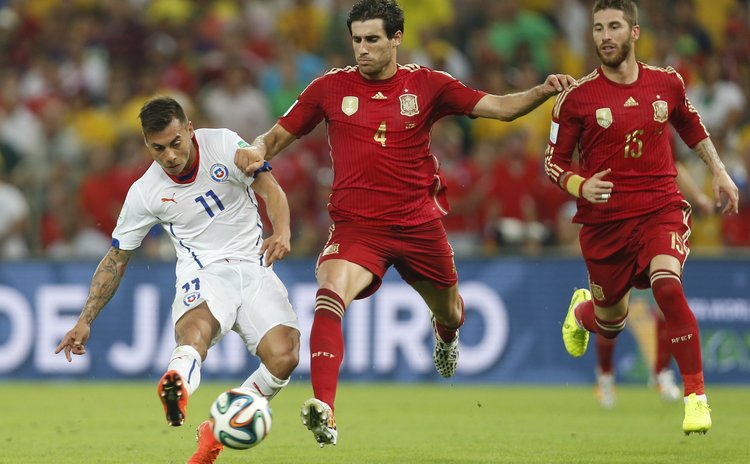 SAO PAULO, Brazil, June 22 (Xinhua/Sun)--Although both teams are already certain of the next round the last match in Group B between the Netherlands and Chile could be described as a final.

Both teams impressed in the first two matches, with the Netherlands beating Spain 5-1 and Australia 3-2, while Chile won 2-0 against Spain and 3-1 versus Australia. Due to a better goal difference the Dutch are on top of the group and could settle for a draw to stay number one.

"The toughest opponent," Netherlands coach Louis van Gaal said about Chile during the press conference in Sao Paulo. "They have a fantastic coach (Jorge Sampaoli), who lets them play offensive and combative. We also play well, so it's 50-50. They do fore-checking with the whole team. We have to be capable to come out of their pressure."

The result of the match decides on the Group B winners or number two and also on the next opponent of hosts Brazil in the second round. Holland and Chile will play first so Brazil could theoretically even pick whom to play in the next round. Croatia and Mexico are also still in contention for the first and second spot in Group A.

"I can imagine Brazil does not want to play against us," Van Gaal added. "We scored eight goals, fantastic goals, that' s a lot. I don' t think our tactic is as offensive as we used to play, but still we play offensive. We play a tactic which suits our players best. They enjoy themselves, they want to fight for each other. The atmosphere in the group is very good."

Based on the last training Jeremain Lens, Dirk Kuyt and Georginio Wijnaldum will start instead of suspended Robin van Persie, Bruno Martins Indi, who suffered a concussion against Australia, and Jonathan de Guzman, who will be suspended if booked. Van Gaal could also choose not to change the system and just replace Martins Indi by Joel Veltman or Terence Kongolo and Van Persie by Lens.

Chile coach Jorge Sampaoli is aware of his counterpart's options. "It's going to be a strategically difficult match, because Van Gaal looks for several options and they will try to control us," he said during a press conference. "But we have the power to uncover certain Dutch deficiencies. The team that wins will be the one who has the necessary will."

Sampaoli has no injury worries, although he might decide to rest Arturo Vidal who still has some knee complaints and will also be suspended if booked. Charles Aranguiz, who was declared fit after a knee injury, and Eugenio Mena are both on one yellow card as well.