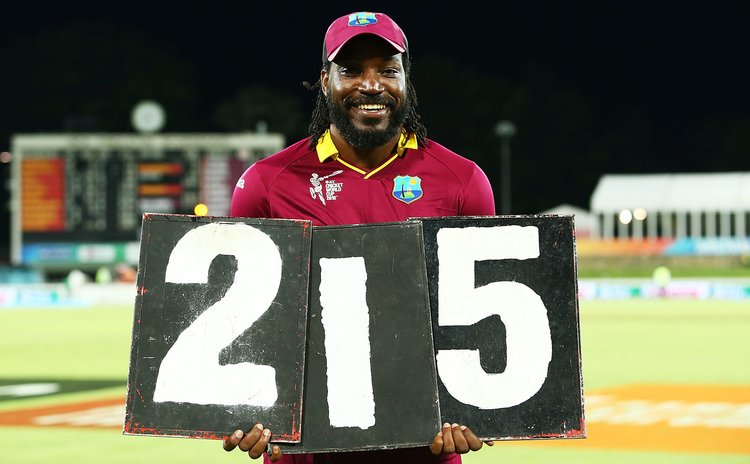 Much may have gone through the minds of the Zimbabwe players as they endured the gale force winds swirling from the bat of Chris Gayle. Some thoughts may have leaned on the technical or tactical to the extent of giving the big Jamaican a single to get him off strike, or pondering what species of fortuitous delivery their bowlers might conjure up in the hope of his falling victim to a mishit. Seemingly, any mishits that occurred fell, almost all, fully beyond the boundary of the Canberra field. Gayle smashed 16 sixes and 10 fours in savaging 215 off 147 balls – 88 of which rarely failed to connect with the middle of his heavy blade.

Gayle was dismissed off the final ball of the West Indies innings, attempting to clobber what would have yielded him a 17th six to claim the outright record for any ODI knock in this department of boundary assaults. As it turned out, he fell one short, but did not prevent him ascending to top position of being the only batsman ever to register a double century in the World Cup.

The incredibly stupendous effort served to completely overshadow the contribution of Marlon Samuels, 133 not out, with six sixes and 10 fours from 151 balls. The pair put on 372 runs for the second wicket- a world record for both the World Cup and ODI cricket.

A mark of the level of acceleration by West Indies in the latter phases of the innings saw Samuels moving from a hundred, his 9th in ODI, to his adding 22 in the 49th over, having enjoyed the best seat in the house for his partner's monumental parade. The cascading process erupted at a time of Gayle's hitherto perilous loss of form and many pundits suggesting a necessity for the 35 year old slugger to be penalized for a too lengthy absence from among the runs. It was a run famine inducing inelegant response by president of the West Indies board Dave Cameron to the effect of endorsement of electronically twittered call for Gayle's dismissal from the team.

As to the enforced attendance by the Zimbabwe team one is put in mind of the time when another West Indies colossus Sir Gary Sobers was in full swing with impending prospect of hitting six sixes in one over. The victim was slow bowler Malcolm Nash of Glamorgan. He later conceded bowing to the inevitable thought of sharing in Sobers' record forever. It was not quite as bad as the goalkeeper having his undershirt carrying the magic number of 1000 for Pele's attainment to that figure.

Zimbabwe may have suffered total eclipse but only to the extent of having themselves amassed as many as 289 runs all out in 44 overs and three balls – enough to have taken the measure of most other opposition but not this time around. Shaun Williams, 76, and Irvine, 52, did much to repair a situation of 11 for one, and 46 for three was improved by an 80 run partnership for the 4th wicket, 51 for the 5th wicket and 60 for the 6th. Jerome Taylor showed how much he has improved after the Irish setback by taking three wickets for 38 runs. Similarly Jason Holder's three for 48 depicted a much better recourse to a sensible bowling plan by West Indies. Then, riding on his overflow of confidence, Gayle chimed in with two for 35, managing to stem potential bother from the lower order of Zimbabwe.

Net summary of the encounter was: West Indies 372 for two and in response Zimbabwe 289 all out – a win for West Indies by 73 taking them to second position in pool "B" behind India. Intriguingly, that set the stage for West Indies next hurdle in hope of making it further in the tournament, their clash against South Africa who themselves will be coming off a chastening defeat at the hands of India at Melbourne.

India capitalized on winning the toss to rack up 307 for seven boosted by Darwan making use of an early life to plunder 137 in 146 deliveries. Rahane 89 and Kohli 47 were the other main scorers. South Africa suffered loss of their most consistent bowler when Vernon Phillander had to withdraw with a leg injury after four overs.

In response South Africa plunged from 103 for one in their 22nd over to 177 all out allowing India victory by a margin of 130 runs – the defending champions looking to be running into peak form at the right time. It was the first time India had beaten South Africa in a World Cup match in four attempts. Spinner Ashwin 3 for 41, Shami 2 for 30 managed to keep a tight lid on the South Africa batting and when Du Plessis was caught at mid off for 55 and Douminy committed suicide via a reverse sweep at 147 for 5 it showed how vulnerable many world class batsmen can be to scoreboard pressure. It was a case of heedless haste when a better calculation of approach was needed.

Afghanistan upped the clamor for fuller acceptance of the associate teams by running Sri-Lanka hard. Stanikzai with 54 and Shawari 38 scrapped a modest total of 232 which could have been better, had it not been for Lasith Melinga saving face with 3 for 41 in the later stages. In their turn Sri Lanka stumbled to 178 for 6 and were thankful for older statesmen Jayawardene for an invaluable 100 and Matthews 44 before being run out. Sri-Lanka got home 236 for 6 with 10 balls remaining.

England avoided three defeats in as many matches by limiting neighbours Scotland to 184 in 43 overs, but suffered decline from 172 without loss to 303 for 8 spearheaded by a robust 128 by Moeen Ali, 54 by Ian Bell and 46 by Morgan Finn 3 for 26 helped England to its 119 run win.

United Arab Emirates was good enough to get to 285 for 7 against Zimbabwe at Nelson but the African team relied on Shawn Williams 76, Baza 46 and Taylor 47 and Kavine 40 to take them to 286 for 4.

England suffered an earlier calamity, going down for 123 in 32 overs (Root 44) smothered by Southee 7 for 33. New Zealand's captain Brendan Mc. Cullum made light work of the target by hitting 77 in very quick time to register three wins from three matches.

At Christchurch West Indies emerged from abject slumber besetting them against Ireland to force 310 for 6 through swashbuckling efforts by Ramdin 51, Sammy 30, Simmons 50, Bravo 49 retired hurt and Russel's bombshell 42 not out off 13 deliveries, against Pakistan who never posed any meaningful answer. They were all out for 160 in 39 overs. Russel and Taylor bagged 3 wickets each.