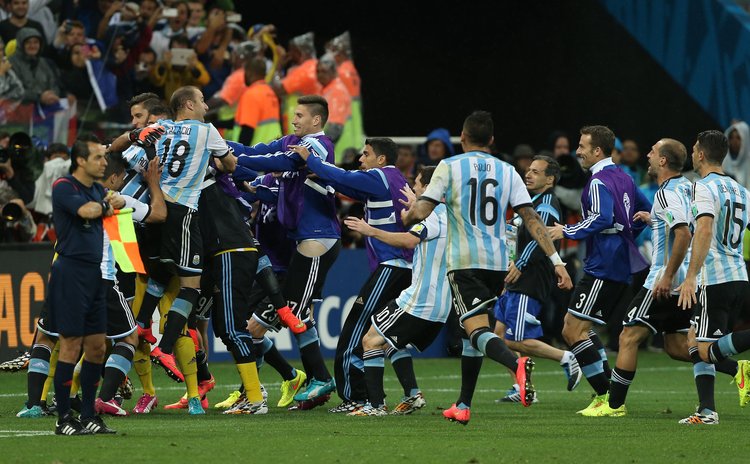 Romero, 27, playing for Monaco on loan from Sampdoria, was Argentina's starting goalkeeper at the ongoing 2014 World Cup. Tonight, he upset Dutch defender Ron Vlaar and playmaker Wesley Sneijder in the penalty shootout after the close game ended 0-0 after extra time.

Romero said after the duel that he felt so great tonight and that he would also do his best in Sunday's final against Germany.

Messi, the Man of the Match in Argentina's first four matches at the World Cup, scored one of the penalty kicks tonight, but he was otherwise quiet and Argentina failed to impress all night.

Dutch coach Louis van Gaal did well to snuff out Messi during normal time, but his team were also devoid of ideas in attack.

Born and growing up in Argentina, Romero initially joined Racing Club de Avellaneda in the Argentine Primera Division and signed his first professional contract in 2006 when he was 19.

Romero's two elder brothers are basketballers and due to his smaller stature in comparison to them, Romero earned the nickname "chiquito" which means little. Ironically, he is 1.92-meter in height now.

At the end of his first season in 2007, Romero was transferred to Dutch club AZ Alkmaar for a fee of 1.5 million euros. Dramatically, Alkmaar was managed at the time by Louis van Gaal who packed tonight.

Romero achieved 18 clean sheets in the 2008/9 season until he broke his hand in the team locker room in frustration after a quarterfinal cup loss against NAC Breda. He returned to first team action in April 2009 to cap off a fine season in which AZ Alkmaar only conceded 22 goals.

Romero set a personal record of not conceding a goal for 950 minutes and thus setting the fourth longest stretch of time for goalkeepers not to have conceded a goal.

In August 2011, Romero joined Italian Serie B side Sampdoria for an undisclosed fee and helped the team eventually return to Serie A.

With 52 international caps for Argentina, Romero conceded only three goals (not including penalty shootout) from Argentina's six matches in this World Cup.