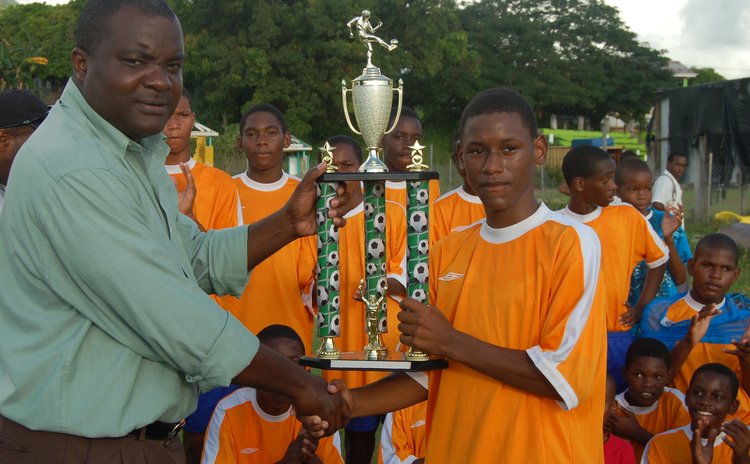 Goodwill returned to the top of Primary Schools football championships organised by the Sports Division and sponsored by the National Bank of Dominica with a sterling performance against St Joseph Junior in the final at Benjamin Park on Friday, March 8.

St Joseph got on the score card within the first five seconds of the commencement of the match when Jamalie Laurent intercepted an attempted back pass from the centre pass to easily beat the Goodwill goalkeeper. Things got from bad to worse for Goodwill when in the fourth minute of play Aaron Francis was well positioned to head home another goal at the end of a brilliant corner kick.

The Goodwill coach did not appear overly alarmed and urged his young charges to maintain their composure. Goodwill were the better passing side throughout that day's football and it was not long before they pulled back the first goal, a scrambled effort. Goodwill scored twice more in that 20-minute first half, both again scrambled efforts, and for one or two controversial, but the game would go on without rancour to the half at 3-2 in favour of Goodwill Primary School, and finally 3-2 after a goalless second half. Kivel Dorival (2) and Kerdeem Theodore were the scorers for Goodwill.

But while most might have agreed that the St Luke's triumph was a foregone conclusion, San Sauveur came back into the second half unrecognisable from the first half. Shawn Rossi smashed his first of his hat trick of goals from long range. But St Luke's were on top of their game and duly restored their two-goal cushion. Young Rossi was by then in irrepressible form and struck twice more in quick succession to force the match into 10 minutes over time.

The match ended 3-all and went into penalty kicks, and you guessed it, San Sauveur scored their mandatory three penalties while St Luke's of Pointe Michel missed their third kick. Elton Lafaille (2) and Raul Jno Baptiste scored for St Luke's In 40-minute semi-final matches, Goodwill Primary knocked out San Sauveur 3-1 with goals from Kerdeem Theodore, Derwin Wade (captain) and Lee Joseph, and for San Sauveur, Shawn Rossi was the scorer; in the other match, St Joseph Jamalie Laudat headed home from close range after the St Luke's goalkeeper parried the ball towards him in the second half.

Earlier, National Bank of Dominica's Marketing & Public Relations Officer Amanda Scotland congratulated the semi-finalists who came through from the 53 schools which began the competition in January. She warned the losers not to despair because there was always next year.

The Sports Coordinator thanked NBD for their sponsorship of $15,000 to this programme which would be played in three phases again this year. The second phase would comprise of a play-off among teams representing the nine districts in which the schools played. This would be followed by a girls' football festival. The festival would see 15 schools playing in three zones compared to four schools in 2012.

There was also the prospect of a Dominica team participating in a mini-festival in Martinique.