Government reports on the state of the economy 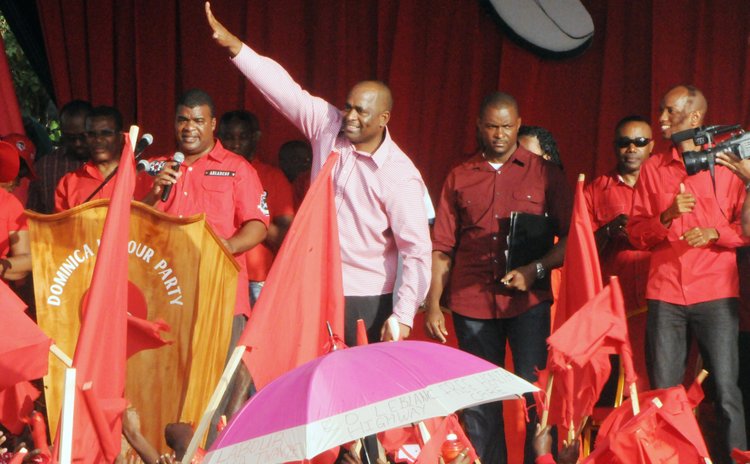 Alvin Bernard, the Minister of National Security, was given the important task of selling the Government's record on the economy at the Dominica Labour Party's rally at St Joseph last Monday.

Bernard, an economist who worked at the Ministry of Economic Planning before becoming a politician, began his report by blaming the United Workers Party (UWP) administration (1995 to 2000) for taking Dominica more than a few steps down an economic precipice.

"Labour has worked with courage, commitment, compassion and sincerity to save Dominica from the brink of the financial crisis in 2000 through stability and on a path to prosperity not only for you and me but for future generations," Bernard said. "The emerging geo-political situation from 1995 to 2000 in Europe created tremendous casualties for developing countries including the banana industry. The then United Workers Party had no credible response to the crisis."

Bernard said during the UWP administration banana and farm acreages declined significantly and "there were unsatisfactory performances in all government indicators".

For instance, the debt to GDP ratio rose to 125 percent, he said.

"We were pouring water in a basket," Bernard said. "All the IMF article reports warned of the emerging crisis."

"Money may have been following money but it was not in the State's Treasury, it was not in the economy," Bernard said. "It took the courageous leadership of the Dominica Labour Party Government to first arrest the decline, stabilize the economy and place the country on a path to recovery and prosperity".

Then, he said, the weather continuously messed things up.

"Every time that we thought we were out of the woods we had to deal with disasters caused by frequent significant weather systems and the more recently prevailing financial global and economic crisis which began in 2008," he said. "Fortunately we had swallowed the bitter pill, made difficult choices with the support of bilateral friends and the international donor community we have developed significant resilience and protected our citizens from the worst".

Bernard said "the same cannot be said about our neighbours" in the Organisation of Eastern Caribbean States (OECS) where at least three countries are currently knocking on the doors of the IMF.

Using statistics to buttress his arguments, Bernard said "economic growth (in Dominica) has been restored at an average growth rate of 1.2 percent per annum" and that "the government is mindful that more is required to address employment and income".

Bernard said that the current debt to GDP ratio is 72 percent; extreme poverty was reduced from 39.9 percent in 2002 to 28.8 percent in 2009; unemployment was reduced from 19 percent to eleven percent (he did not state the period); and universal early childhood, primary and secondary education "is a reality in the Commonwealth of Dominica."

But other economists and observers have contradicted the government's interpretation of the economic situation in Dominica.

As the Sun reported recently, in its most recent report on Dominica issued in January 2013, the IMF made reference to "weak recovery" during the previous year, which, it said, "reflects anemic domestic demand, low tourist arrivals, and closure of some manufacturing operations".

"Employment conditions remain strained: the unemployment rate, most recently recorded at 10 percent in 2009, remains high, and about five percent of the labour force were discouraged workers," the lending agency reported.

The Caribbean Development Bank (CDB) is even more damning. In its Poverty Assessment Report of December 2010, the bank reported 14 per cent unemployment and said that nearly three in 10 Dominicans didn't earn enough to have an acceptable material standard of living.

Bernard has argued that that was then, but that things are looking up, with the country's national debt halved, from 110 per cent of Gross Domestic Product, to 65 per cent of GDP.

In any event, observers argue, the picture being painted by the government about prospects are nothing but a mirage and that, contrary to the words of the DLP campaign song, nothing is happening.

"Dominica's economy is in a shambles…That is reflected in the increasing level of unemployment and very little economic activity taking place in the country," Thompson Fontaine told The Sun.

While the UWP candidate for Grand Fond admitted that the island has been affected by the global economic crisis of 2008, he told The Sun that because Dominica's economy isn't as integrated into the world economy as that of some of its Caribbean neighbours, the impact was not as severe. The problem with the economy, Fontaine said, lies elsewhere.

"The economy in a comatose state. The tourism business isn't (doing well); there are more (cruise) ships (this year) but smaller sizes, plus the passengers aren't spending much. On the stay-over side, this winter wasn't so good, and we hardly have much in agriculture which we export. So things are just tight all around," Marie told The Sun.

"And then the government doesn't have much public works projects going on. The State House finish, College finish, the road the Chinese were building finish, so there just isn't much happening. So all round …in the immediate future there is nothing seeming to be on the horizon."

Obviously, Alvin Bernard and the Government do not agree.