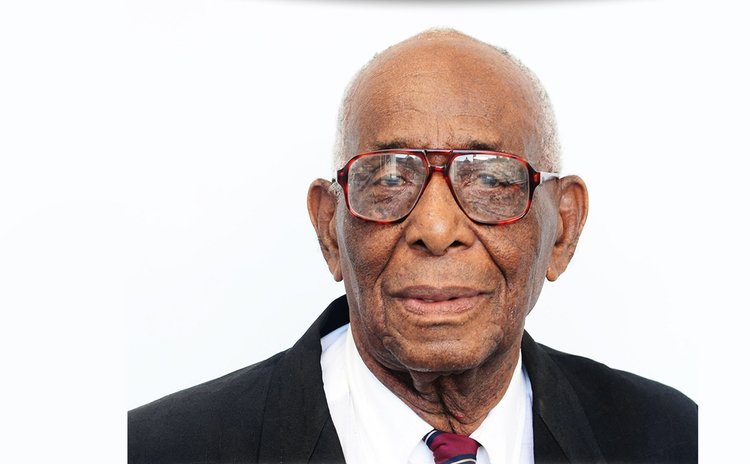 Not having spoken with him for a couple of weeks, I paid little regard, thinking merely our paths had simply not crossed after regular Sunday mass at the Cathedral chapel where he served for several years as the maintenance man and Lay Associate in bringing holy communion to the homeless and otherwise less fortunate, I gave no thought, thinking the timeless Hubert "Son" Joseph was going about business as usual. Actually, in the interim I had occasion to converse with his son Mickey, but it was, indeed his mother who was the subject as she had recently not been well. In pragmatic manner the younger man glossed over the abiding difficulty older folks encounter in surrendering the past to the future. Little did we know we would be faced with Mr. Joseph's departure from our midst and in a very fleeting moment!

My first knowledge of Hubert Nicholas Joseph was of him as a more advance student at Roseau Boys School at Newtown and as a boy scout. This says it all. The school was synonymous with the love of excellence laid by headmasters like the legendary Zephaniah Josephs and others. "Excelsior" was the word and "not I can't, but I'll try!" Those were the mottos printed on the walls of this hallowed institution, the oldest school in Dominica. Then, too, being a scout meant aspiring to the best a young man might dream of for the betterment of himself, his family and society.

Inimitably among our schools, Roseau Boys School meant football as well. On mornings during fine weather half the school kicked up and the rest kicked down on the New Town Savannah. I am reminded there was a certain pride of belonging as to the direction in which you kicked – up or down the sloping ground. Thus, as means to identifying an individual, recourse would be made as to the direction in which he kicked and the part of the field he generally occupied!

We cannot confirm the direction Hubert Joseph kicked. However, he did well enough to attract the attention of Dominica fullback and then school teacher Carlton Felix sufficiently to gain a place with the awesome club Notre Dame. My later perceptive years did not allow me to rate him as a stylish footballer. Superficially, he was more guts than grace. He was never going to challenge Allan Guye for the place of centre half. His virtues bracketed him with mortals like Jerome Hurtault and Goddard Doctrove to inherit the mantle of Vivian "Vers" Benoit at right half or left half for either Notre Dame or Dominica. Let it be said that his pugnacity never wavered and his was the glory of making it unto the Dominica side.

Eventually Hubert parted company with Notre Dame – not on acrimonious terms. His spirit shifted to the new emerging Thunderstorms whose composition embodied several in his age group and social strata. It was a time of the mid forties when a match at Windsor Part between Notre Dame and Thunderstorms was all the talk of the town – somewhat like Harlem and Kensboro a few decades later. It spelt out the clear and distinct divisions of the society. There was no borderline support. You were either Notre Dame or Thunderstorms. It was like black and white, very unmistakable differences.

On hanging up his football boots, Hubert Joseph, immediately gravitated to football administration, public service being in his blood as son of the Town Clerk for several years, Mr. Winnifred Joseph. That's where we got to know each other much better. His lot was interwoven with that of Eddie Robinson in piloting the Dominica Amateur Sports Association (DASA), a body never stranger to the hard facts of finding money to send Dominica national teams to Windward Islands cricket and football tournaments.

In process of time the DASA was entrusted to Dr. Desmond McIntyre serving as President with Mr. Waddy Astaphan as Vice President. Hubert Joseph served as a committee member and played the very useful role of coordinating projects to deal with constructing most of the walls and enlargement of the old Windsor Park. Those projects were seen as the master stroke to achieve the realistic means to be able to collect much needed gate receipts to fund the cherished scheme of football and cricket development. No longer would wholesale and demeaning begging be the order of the day.

Major element in Hubert Joseph's credentials was his early background as apprentice carpenter, later going on to work with the Public Works Department (PWD), rising to a position of foreman, and eventually serving with the Central Housing and Planning Authority (CHPA). He was sent on a training course in the U.K. wherewith he instantly approached me to hold on as Chairman of both the cricket and football sub-committees of the DASA. The year was about 1966.

Running the football league was plain sailing. There were no more than eight to ten clubs or teams in the two divisions. It was in the cricket I trod into deeper water. At his meetings with the teams Mr. Joseph, by then a business man in his own right, had the knack of speaking gently – even though his word was absolute law! But, there was I holding on for him even as an active cricketer and footballer myself. And many were waiting to see what mistakes I would make.

It was my view that some effort be made to ensure completion of the local cricket season, the whole exercise chronically collapsing each year with the advent of the Windward's tournament, after which no teams were keen to play on, what with all incentives of places on the national team already consumed, and in any case, the advent of the rainy season invariably predicted for the month of June. The answer to me was to increase the number of match venues. So, I developed the notion of scheduling matches at Pottersville and the Dominica Grammar School to make it a foursome with Botanic Gardens and Windsor Park.

A meeting of the teams drew acceptance of the idea. However, with the meeting taking place in October of the preceding year, would you believe it, no less than twelve teams registered for the First Division. They hailed up and down the West Coast, the South and right on to Melville Hall and Woodford Hill. Upshot of this, all 66 matches were played off in the four months from January to April. Players had a ball of a time – not so Mr. Phillip Alleyne with headache of supplying umpires. Yet, it was a time of excellent spirit on the part of all concerned. Players themselves were willing to deputize as umpires where necessary.

Exemplifying the essence of Hubert's persona of goodness was one of his sayings: "you should be good to others as you don't know who might be good to you". In this regard, I think he would not take exception to my revealing this little story. It was his early ambition to get married and to acquire a decent residence. Any student of finance will know the magnitude of obtaining in those days a bank loan of the order of twenty thousand dollars ($20,000) for a young man subsisting on the less than impressive salaries of the early 1950's. It was like an ambition to see the other side of the moon!

This ambition was aided by a banker but not in the regular fashion. Joseph's work early with the PWD took him to Morne Bruce on maintenance exercises with government property up there. Whereupon he was accosted by a bank manager's wife in hope of solving an embarrassing domestic problem with a sceptic tank acting up in most disagreeable manner, and all invitations already issued! Hubert told her "madam, rest assured I will do my best". His best was indeed done with the help of an unemployed youth who emptied out the tank, rinsed it out methodically and returned it to agreeable service.

Of course, there was the dutiful follow-up of personally calling to ensure if the job was very well done. It was at that point the bank manager was approached for the loan. Needless to say, it was approved with the utmost alacrity! The other side of the moon duly reached.

We are short of space here to account Hubert Joseph's involvement in carnival development, something which pleased him immensely. Let it be said he deemed all such effort so needing to contribute to a blaze of glory for Dominica. Let me publicly offer condolences to Mrs. Flossie Joseph, his wife, son Mickey and Mrs. Joseph, daughter Mrs Cecilia Nicholas and Mr. Nicholas, relatives including brother Anthony, sisters Mrs Janice Armour and others not currently residing here. Dominica has lost a supreme workhorse. I need as well to include here the folks of Coulibistrie from which his mother hailed. God's fondest blessings upon all.