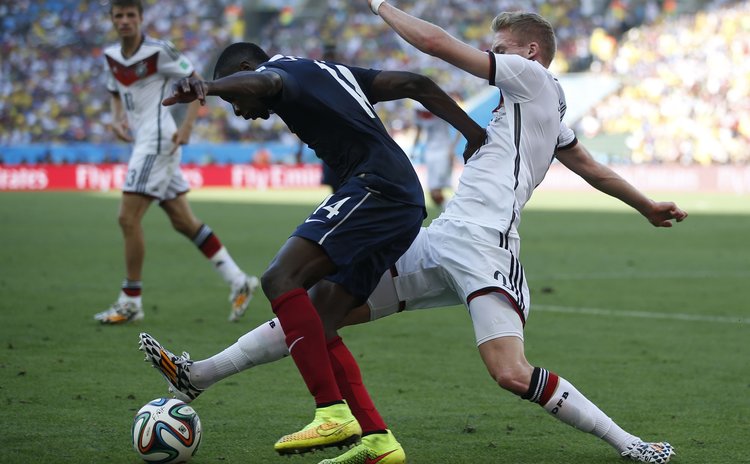 RIO DE JANEIRO, July 4 (Xinhua/Sun) -- Germany advanced to the World Cup semifinals for the fourth successive time after a first-half Mats Hummels header earned his team a 1-0 victory over France here on Friday.

The result sets up a semifinal clash for Joachim Low's team against either Colombia or Brazil in Belo Horizonte on July 8.

The three-time World Cup winners are the first team to make the last four at four consecutive World Cups.

Their unbeaten run has now stretched to 16 matches, the longest of any team competing in this tournament.

Hummels replaced Per Mertesacker in the heart of defence, while captain Philipp Lahm returned to his customary right-back role, allowing Sami Khedira to slot into midfield.

Miroslav Klose, requiring just one goal to become the World Cup's highest scorer, was given his first start for the tournament.

France coach Didier Deschamps also shuffled his team after their 2-0 defeat of Nigeria in Brasilia.

Germany then went ahead after Hummels' looping header went in off the bar following Toni Kroos' inswinging free-kick from the left.

Having appeared content to sit back early, France looked more dangerous as the first half progressed.

Benzema was particularly threatening and will have been disappointed not to have capitalized from a host of chances.

Arguably the best of them came after Valbuena's pull-back fell to the 26-year-old in the box. But his left-foot volley flew off target after being partially blocked by Bastian Schweinsteiger.

Benzema continued to threaten. He had a header blocked by Hummels before his powerful drive after a piercing run into the box was saved by Neuer.

France emerged after halftime with obvious intent to seize the initiative, denying Germany time on the ball.

Real Madrid defender Raphael Varane nearly broke Germany's resistance when his header from a Valbuena cross drew a comfortable save from the Bayern Munich goalkeeper.

Griezmann then rounded his marker before spraying his shot wide of the target.

Germany went close to doubling their lead when, against the run of play, Thomas Muller shot wide after his team gained possession from an errant Sakho pass.

Low replaced Klose with Andre Schurrle and the Chelsea forward had an immediate impact.

Suddenly Germany moved the ball with more fluidity and Schurrle, menacing on the right, had successive shots saved by France goalkeeper Hugo Lloris.

France did not relent but Benzema - their chief scoring threat - seemed cursed by ill-fortune.

The No. 10 again had a shot blocked before his fizzing attempt from the edge of the six-year box was superbly cleared by Neuer.