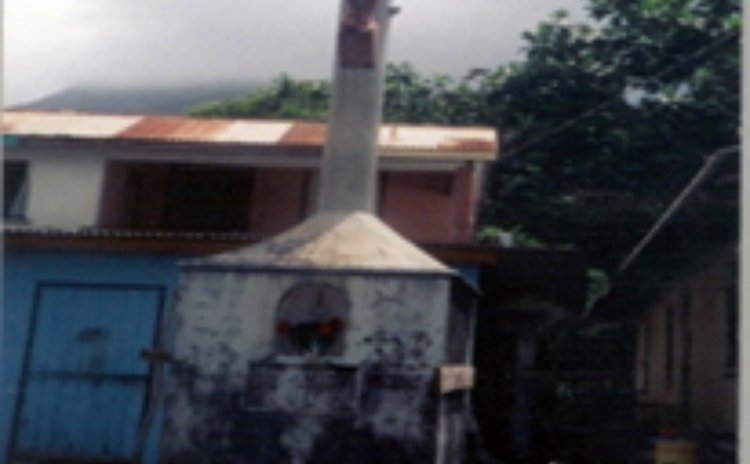 The south eastern rural agricultural community of La Plaine which nestles between Morne Gorverneur and the rugged Windward Atlantic coast (Au Vent) is filled with shock and sadness. A fatal vehicular accident on the Pond Casse road in the middle of the rain forest killed two of its best and brightest. The vehicle in which cousins Kurt Hector and Norran Jno Hope were traveling in a west bound direction in the early morning plunged into an overnight ravine which was caused by the heavy torrential rains. A man from Grand Fond Mr. Joslen Prince miraculously survived the deadly accident.

Why did the road buckle and caused a deep sink hole? According to geologists, geotechnical engineers and surveyors, since the 1990s there has been an accelerating trend toward more extended dry periods followed by downpours. Whether due to random climate patterns or global warming, the swings between hot and dry weather and severe rain profoundly affects soils. Soils shrink during droughts and swell during floods, causing it to lose its adhesive and cohesive properties and to shift or just collapse beneath structures like buildings and roads. Such sinking which is referred to as subsidence (sink holes) usually happens gradually. But swinging from extremely dry to very wet weather maybe accelerating the effect of subsidence. The Public Works Ministry may want to consider putting up road signs warning of subsidence in the countryside.

My sister was struggling to deal with the reality of the accident when she called me. She described a familiar scene where the entire village had gathered in the public square trying to deal and make sense of just what had happened to their young and vibrant neighbours. She described folks screaming helplessly and Kurt's grief stricken father as being very confused and numb. What else could he do and what can be said to him? Fathers are suppose to die before their sons except in times of war when young men head to the battle front. This was not the case. It was a joyous and proud occasion for all of La Plaine as two of our own were off to St. Vincent to represent our island as national footballers. It was a moment for LaPlaine to move away from its superficial divisions and rally around its own- but that would not be.

But in times of tradedgy and sadness, LaPlaine folks always come together in the village square under the (Jubilee) cross . They did it again last Thursday. The stature depicting the cruxifixtion of Jesus Christ on the cross of Pontius Pilate has always been a powerful symbol of suffering, hope and deliverance for the village. Twenty years ago I interviewed two village elders 'who have now gone' about the cross. My grandfather, Mr. Burton Allan and Mr. Justine Burney told me that it was built by parish priest- Father Moorpity in 1934 after the devastating and deadly hurricane of 1930. The priest wanted villagers to be more forgiving and caring for each other and to remember that Christ is merciful and benevolent and that life is tenuous and fragile. Another story said that the cross was built to commemorate the Jubilee (100 years) anniversary of the abolition of slavery by the British Government in 1834 and as a tribute to abolitionists such as William Wilberforce who worked tiredly in the British Parliament to free slaves in the colonies.

Whatever the reasons for the cross it has always been a very powerful, trustworthy and sensitive symbol for our village. In 1972 when another vehicular tradedgy striked again, folks gathered in the square under the cross crying and wailing. Village leader Mr. Hilton Joseph's failed to negotiate a hair- pin turn properly causing his small pickup truck to plunge in the valley in Baliezier about half a mile from the where the track bends to the Sari Sari falls. Pa Joe and four village men perished. In 1966, while five La Plaine men were working on a Public Works road project at the Boetica River, a huge landslide covered them up. As a kid I can remember when their decomposed bodies were transported by 'dumper' to the make shift morgue at the La Plaine Dispensary (now the site of the Health Center).

It will take some time before La Plaine gets over the untimely and unfortunate deaths of the National Footballers and before life gets back to normal. But the demise of the two promising young men is a powerful reminder that our names can be taken at any time and at any place. So one does not have to be a biblical or religious scholar to say to La Plaine folks and all Dominican that we should be nice to each other in spite of differences; for tomorrow the sun may never rise. May the souls of Kurt and Norran Rest in Peace. May the families and La Plaine find solace, togetherness and strength in the face of this tragedy.