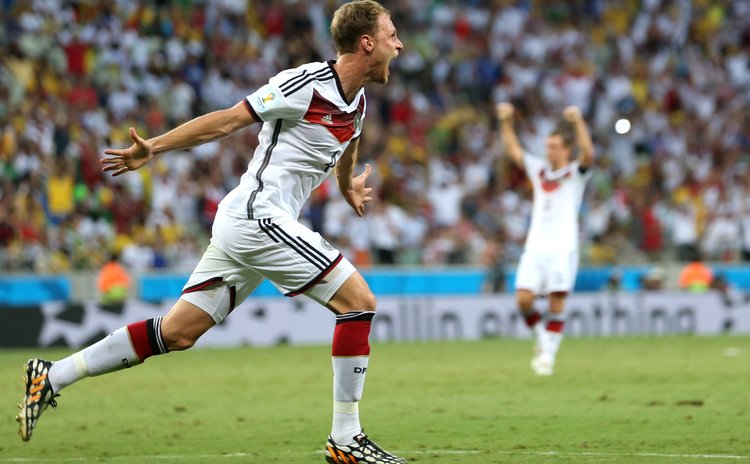 "I am very happy for Klose. He stepped on the pitch and after just two minutes he scored the goal. It's sensational for him," said Joachim Loew, coach of Germany. "He is a player who can have a decisive impact, which is of great importance for me and for the team."

Both teams remained scoreless after a plain first half before Germany broke the deadlock 51 minutes into the match. Mario Gotze met a cross ball whipped in from the right flank and the 1.71-meter nodded home after the ball deflected off his left knee and past Ghana's goalkeeper Fatau Dauda.

The jubilant German fans in the Castelao Stadium only had celebrated for three minutes before Ghana's Andre Ayew equalized in the same way as their opponents scored the first goal. Only this time Ayew's header was more powerful as it flew into the bottom left of the goal.

Asamoah Gyan gave the "Black Stars" the lead nine minutes later after he ran into the box and beat German keeper Manuel Neuer with a brilliant finish into the side netting.

The Germans were struggling to even the score and brought in their seasoned center forward Klose in the 69th minute. The 36-year-old only needed two minutes to fulfill the mission.

German defender Benedikt Howedes flicked on a corner kick and the ball sneaked past everyone else in the box. Klose touched home in the far post and scored his 15th goal in World Cup to level with Brazil's Ronaldo as the all-time top scorer in the tournament.

The goal also made Klose one of only three players to have scored in four World Cups after Brazil's legend Pele and Uwe Seeler of Germany.

"Both teams had many chances, and many counterattacks," Loew said. "Ghana really gave everything they had in the match. It was not what we expected from the match but it was how it came out."

"Germany is one of the top teams in the world and leave everything on the court," said Ghana's coach James Kwesi Appiah. "We did our best and we had some opportunities."

"I believe that attack is the best form of defense, and that's what we're trying to implement," he added.

Germany maintained the same line-up they used in the 4-0 win against Portugal in their open match with Bayern Munich's Thomas Muller, who scored a hat-trick on Monday, still playing as the solo forward.

Ghana made two changes in their starters as Harrison Afful replaced Daniel Opare in the right full-back position and Kevin-Prince Boateng replaced Jordan Ayew in the attacking line to meet with his half-brother Jerome Boateng from the German side.

The 31-year-old Michael Essien, the veteran midfielder of the "Black Stars", was again left on bench by Appiah.

After the draw Ghana managed to keep their last-16 hope alive with one point from two matches while Germany still need to be cautious since the four points they pocketed can guarantee nothing in the group which also includes the United States.