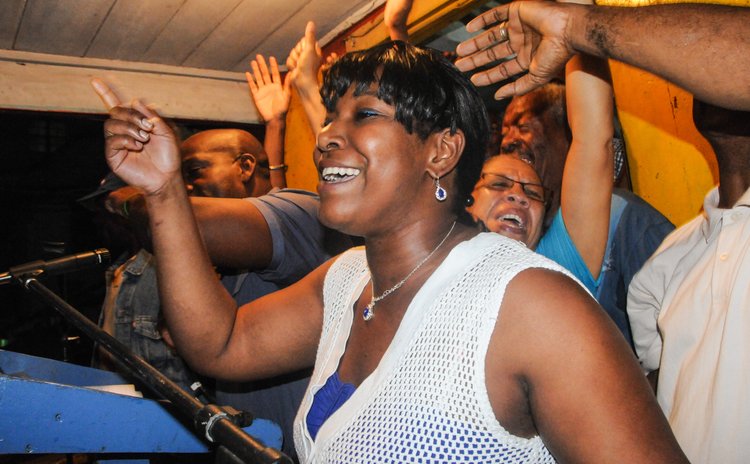 Linton's team at the Lagoon meeting on Friday

With muscles bulging out of tight shirt sleeves and flanked by two burly bodyguards, Lennox Linton gave his first public address since he was elected political leader of the opposition United Workers Party (UWP) at the UWP's delegates conference at Castle Bruce two weeks ago, on September 1st 2013.

Before a crowd of about two thousand and ushered onto a tiny stage by mega speakers blasting Hurricane's "Kai tiwé yo", Linton celebrated with the party faithful at the Dominica Trade Union Hall in Lagoon, Roseau, on Friday night.

Beginning his hour-long speech with shouts of "Woork-kerrss" and screams from the crowd, Linton prayed:

"To God be the glory; great things He has done; so love Him our Isle of Beauty, Isle of Splendour, He spared us the scandal and indignity of Alix in the presidency."

Linton then continued by outlining the major functions and responsibilities of the President of the Commonwealth of Dominica.

Linton said the UWP decided that it would not allow the government to appoint Boyd-Knights to the top post of Head of State. After public protest, led by the UWP, the government withdrew Boyd Knights nomination; former permanent Secretary Jennifer Wallace-Lafond replaced her. Friday night's meeting was the UWP's way of celebrating.

Linton said the team he has been building has demonstrated its ability to protect the constitution of Dominica. The UWP, he added, will support the government's new nominee after the party is satisfied that certain questions have been answered.

"If Jennifer Wallace-Lafond meets the criteria for the presidency as set up in the constitution, we will support her," he said. "But she must satisfy us that she is so qualified. We don't know whether she has satisfied Skerrit and company but she must satisfy us because it is a joint nomination we are accepting the responsibility for what we have nominated to the presidency."

The Lagoon meeting could be considered to be the first public meeting of the UWP election campaign. Although general election is not constitutionally due before 2015, there has been widespread speculation that Prime Minister Roosevelt Skerrit may call early election either later this year or early in 2014.

In an article entitled "Mighty Mountain" published in the Sun Newspaper last week, Barbadian pollster Peter Wickham suggested that the UWP would have to create an eleven percent swing away from the ruling Dominica Labour Party to keep it from forming the next government.

Obviously referring to that Wickham prediction in his speech yesterday, Linton said "we have begun the climb and there is no question we will make it to the top."

He continued by paraphrasing the lyrics of the once-popular song "Ain't No Mountain High Enough" by Diana Ross of the Supremes.

Then to screams and shouts from the crowd Linton repeated the now familiar refrain: "How long? Not long".