Linton: Justice will come like a river of righteousness. 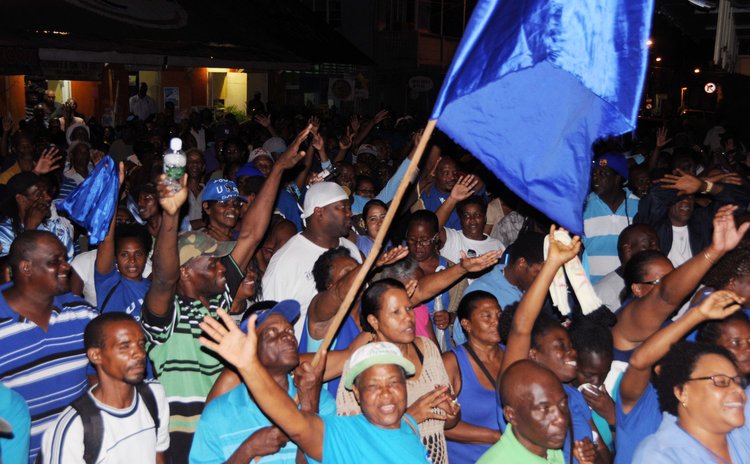 UWP supporters at a meeting in Lagoon, Roseau, Thursday, 28 August 2014

"Change is a must, not an option. We have to win the election; Skerrit must go", said a supporter of the United Workers Party (UWP) during the last East-to-West meeting on Independence Street in Roseau Central on August 28, 2014.

At the meeting attended by hundreds of supporters, Political Leader of UWP, Lennox Linton, said the vision of the UWP is to see growth in the economy and the creation of jobs to help people who are trapped in the hopelessness of joblessness.

"Our commitment (is) to rethink and build the economy (with) growth rates (of) 5-7% a year," he said. "We know our country as a caring part of the Caribbean; we stand on rebuilding its place in international trade of goods and services".

Additionally, he mentioned the high unemployment rate among the youth and the increase in poverty over the 15 years of the Dominica Labor Party government.

" Fifteen years of the Labour Party alleged corruption; 75% of our young people are unemployed and 39% of our people live on ten dollars a day; their lives sadly crippled by the chains of incompetence and the evil of unimaginable corruption," he said. "Fifteen years later Dominicans are forced to endure the hardship of poverty like we have never seen before in the face of material prosperity enjoyed by most of Government and their chosen few," he said.

"Fifteen years later Dominicans languishes in the corners as second class citizens in their own land; so we have come here tonight to dramatize this very shameful condition.

"Now is the time to press your reset button…the government of the people, for the people and by the people should never be allowed to perish from our land"

Linton said he had no doubt that under the leadership of UWP the country can be saved from the hardships endured under the current governing party.

"Have no fear, the road seems rough and rigid but we will get this job done for God and for country, the isle of gloom and despair into which we have so cruelly adopt by the selfish, greedy, corrupt, incompetent Labor Party regime is not the end but is just the beginning," he said.

In closing, Linton stated that the people are not satisfied with the instability in the country and satisfaction will only come when justice is served.