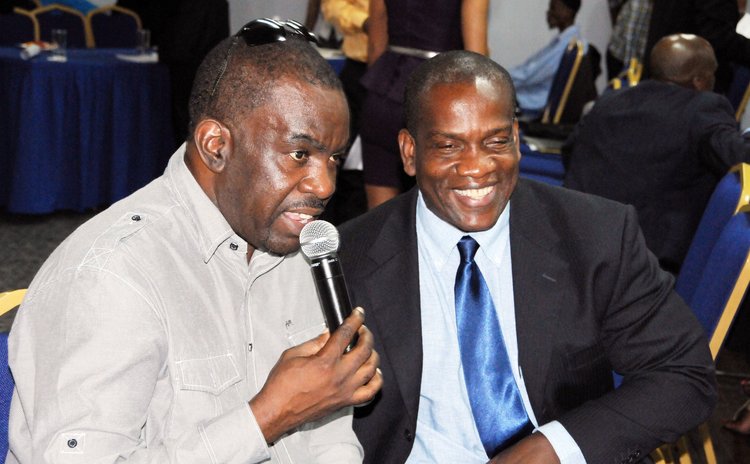 Lennox Linton is being interviewed by Matt Peltier

Leader of the Opposition United Workers Party (UWP) Lennox Linton says the economy of Dominica has been plunged "into a state of chronic underperformance" and under a UWP Team Dominica Government, "Dominica will successfully trade instead of remaining obsessed with seeking aid."

Speaking to the SUN in an exclusive interview Linton stated that the leading engines of growth have been neglected, abandoned or woefully mismanaged.

"As a result the country has become increasingly unattractive to new investments; export earnings have declined; unemployment continues to rise; disposable income – a key driver of economic activity - is being stifled by burdensome taxation; the cost of living is unbearable; and government remains clueless about solutions for the challenge of economic revival," Linton said.

According to him, a UWP government will "rethink, renew and rebuild agriculture, tourism, manufacturing, services, the sunrise industries and other engines of growth to develop a model green economy growing at 5 – 7% per year and supporting the creation of 5,000 new jobs in the first 3 years of a UWP Team Dominica government."

This he says will ensure that by earning and spending their own money and building their own homes in a vibrant housing market, the young people in particular will become active, contributing participants in an economy that has sidelined their national development capabilities for too long.

Questioned about the much talked about issue of campaign financing, Linton stated that it will be a top priority for a UWP government.

"As a top priority in our commitment to the good governance of Dominica, we will enact campaign finance legislation to address the peculiarities of our circumstances and to align our campaign finance system with the best practices in the free world," he said.

As the UWP leader who is vying for the Marigot seat on a UWP ticket replacing the former UWP leader Edison James, Linton expresses "extreme confidence" at winning that seat.

"I am extremely confident that the God fearing, hard working, independent, loving and caring people of Marigot will place their trust and confidence in me as their next parliamentary representative," he said.

He has been openly vocal and critical of the Roosevelt Skerrit led Cabinet calling it "the largest in the Caribbean" and promises to reduce that size to 10 if his party wins the elections.

"UWP Team Dominica will effectively manage the development of Dominica with a Cabinet of no more than 10 Ministers," he stated.