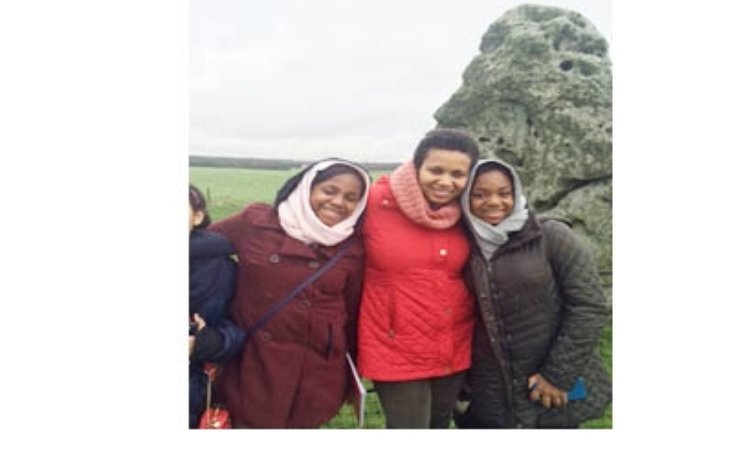 Last December, we took a two hour drive west of London on the M3 Motorway and ventured into the English countryside on a beautiful but freezing day to Stonehenge, a prehistoric monument just outside of Salisbury, a medieval Cathedral city. Archaeologists believe Stonehenge was constructed from 3000 BC to 2000 BC. The site and its surroundings were added to UNESCO's list of World Heritage Sites in 1986. During President Obama's official visit to the U.K in 2014, he toured Stonehenge.

We then travelled to nearby Salisbury and visited the historic Salisbury cathedral, one of the U. K's most iconic medieval buildings. We entered the cathedral through its original 13th-century doors which were built in 1220 and climbed all of its 332 steps to its 404 –foot spire, the tallest in Britain. The cathedral began its life as part of the Catholic Church, but later it became a beacon in the Church of England when Henry VIII split from the Church of Rome in 1534. We explored over 800 years of history of the cathedral. We were moved by its working 14th-century clock and an original copy of the Magna Carta, (Latin for "Great Charter") a key document from 1215 and one of the most celebrated documents in English history.

The Magna Carta is famous as a symbol of justice, fairness, and human rights has been one of Britain's most valuable exports. For centuries it has inspired and encouraged movements for freedom and constitutional government in Britain and around the world. But when it was issued by England's King John in June 1215, it was an attempt to prevent a civil war between the king and his powerful barons in negotiations that were facilitated by the Archbishop of Canterbury. The Salisbury Cathedral's copy of Magna Carta is one of four copies which have survived from the original thirteen copies that were hand written.

At several points in British and world history, the Magna Carta's status as guarantor of rights against an overbearing ruler has proved invaluable. At its inception, it was the solution to a political crisis in Medieval England, but its importance has endured as it has become recognized as a cornerstone of liberty influencing much of the civilized world.

In 1956 the Magna Carta Trust was formed to commemorate the great moment in history at the signing in June 1215. At the Trust's inaugural meeting, Britain's then Prime Minister, The Rt. Hon. Sir Anthony Eden spoke of significance of the new Trust's aims. He said, 'The principles of Magna Carta, developed over the centuries by the Common Law, are the heritage now, not only of those who live in these Islands, but in countless millions of all races and creeds throughout the world'.

The Magna Carta has made a long journey through time, spanning the globe by virtue of the principles and values it has helped to inspire. It has transcended barriers of language and the divisions of cultures and ideologies. 800 years on, the rule of law, individual freedom and human rights are foundational principles of modern societies. Conversely, denials of Magna Carta's core principles have often led to dehumanization, genocide and conflict.

Interestingly, the key note speaker at the Magna Carta Trust 50th Anniversary Dinner in London in 2011 was non–other than Dominican born and British raised, the Rt. Hon. Baroness - Patricia Scotland QC. Her remarks included, 'This gives us an opportunity to mark again the importance of respect for the rule of law, of which Magna Carta is a potent symbol and embodiment, and which is as important today

The granting of Magna Carta marked the road to individual freedom, to Parliamentary democracy and to the supremacy of the law. Maybe on her next visit to Dominica she can conduct a workshop on the Magna Carta to Cabinet or on Skerrit's next visit to London arrange for him to visit the Salisbury Cathedral. That precedent was set in 1994, by the Prime Minister of India, the late Mr. P.V. Narasimha Rao.

PM Roe's visit to the Magna Carta during his four day official visit to Britain was seen very much as a pilgrimage and a tribute to the historic Magna Carta. It is still viewed in his country as a source of inspiration and an affirmation of the values of Freedom, Democracy and the rule of Law, which the people of India cherish and have enshrined in their constitution.

If and when Mr. Skerrit visits Salisbury , U.K and learns about the Magna Carta, on his return to Dominica he should convene a Town Hall meeting in Salisbury with farmers and villagers and try to understand and sensitize himself with that farming community's long simmering and vexing issues .