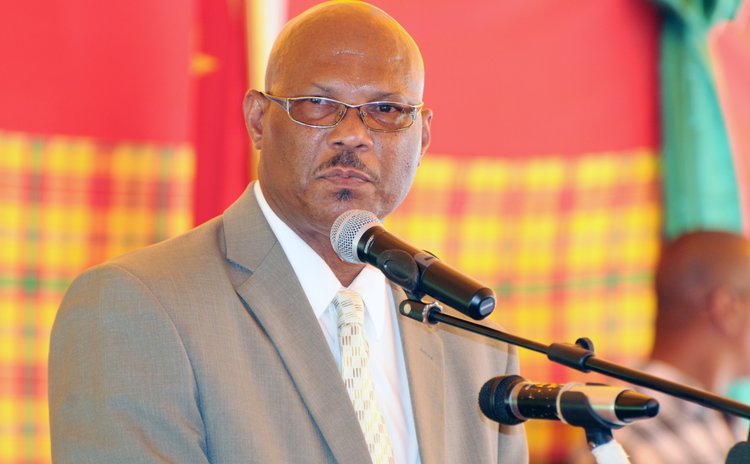 Mathew Walter, the Minister of Agriculture, has a simple answer for persons who say agriculture died and is about to be buried, under his watch. Dead things don't move. And, are these critics vultures, since they benefit from a dead thing, Walter asked.

In a speech aimed at answering his critics about the performance of agriculture, Walter white-washed a sector that most professionals say has been struggling, not only in Dominica, but throughout the region and even world-wide.

Offering statistics on growth in the root crop sub-sector (which, he said, more than doubled- from 24,000 tons in 2006 to 50,000 tons in 2011), Walter concluded that agriculture cannot be dead because it is growing.

"The same progression took place in the other crop categories. Hence, we can conclude that there is growth in the agricultural sector," Mathew said during the formal opening of the Agri-Forest Festival at One Mile in Portsmouth last Wednesday. "Agriculture is alive and moving on to the next level."

Although the sector is battling diseases, such as Black Sigatoka, and natural disasters but the most severe problems, Walter said, are the persistent criticisms.

"My friends, one of the defining economic challenges of our age is to fight against the insanity of a mind-set that sees everything this government does as a bad thing," he said. "We have been bombarded with negative vibes regarding the most indispensable sector in the Nature Isle. Persons with a political bias have unleashed a relentless attack on agriculture."

In his speech, Walter said that there are five factors that will ensure that agriculture continues to be resilient and robust.

Number one is the political will. And, according to Walter, the government has put its money where its mouth is.

"This fiscal year, government invested 11% of the national budget in agriculture," he said. "This is much more than other sister countries in the region."

Walter added: "It is on that basis that Dominica has reached food security requirements and produces in excess for export."

Number two is the commitment of the farmers. Walter argued that farmers "are diligent and committed" but he apparently ignored the fact that generally farmers in Dominica are old and young persons shun the sector.

Number three is the commitment of the private sector to continue investments in the sector to complement the efforts of government, Walter said. He believes that Dominicans have been investing in agriculture.

"We are already seeing multiple investments in the pork and poultry sub-sectors, coffee expansion project, tree crops and root crop sub-sector," he said.

The fourth factor, to keep agriculture moving, according to Walter, is infrastructure. There has been positive movement in that area as well, he claims. He said government has spent $19.5 million on feeder roads (he did not state the period); 11 million on pack houses; 13 million on a coffee plant; 10 million on an abattoir; $645,000 on a citrus certification programme; 9 million on irrigation; and $4.7 million on a National Centre of Testing Excellence.

The agriculture minister contends that the other factors to keep agriculture viable include the marketplace, review of national legislation pertaining to agriculture and the allocation of resources.

On the issue of marketing, Walter said: "The operation of packing houses will ultimately stimulate production and productivity and will generate increases in employment and income and reduce poverty."

On the issue of markets, he said: "Markets do not wait for us. We should satisfy them in order to keep them. We must be consistent in quality, in quantity and sustainability."

On allocation of resources: "In the 2013/2014 budget government allocated $28,969,386 for agriculture" and, the minister said, these figures do not include investments in coffee and fertilizers.