Although the UWP will win some more seats at the next general election, an 11 percent swing from Labour to UWP may be too much this time, regional pollster Peter Wickham suggests. 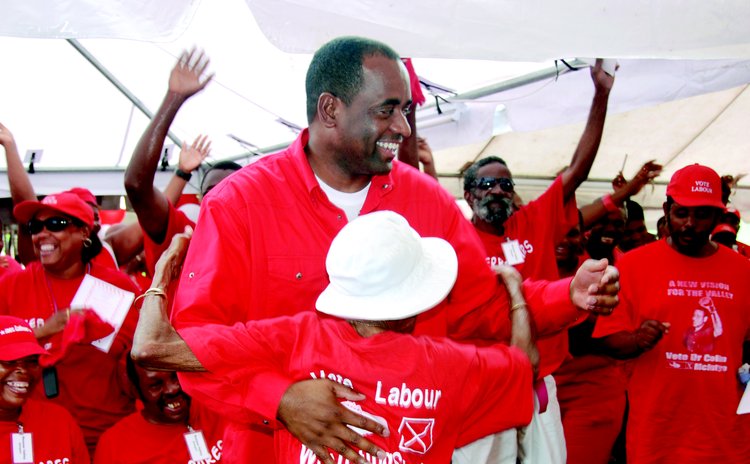 Never mind the euphoria surrounding the new man at the top, never mind the expectation; when the smoke clears, this mountain might very well be much too steep to climb.

Never mind the excited garrulousness and feistiness on display in Castle Bruce over the anointing of a new leader, never mind the anticipation; when the oil dries, this hurdle might be much too high to jump over.

Never mind the growls of fury and righteous indignation over perceived declinism, cupidity, envy and greed by the ruling class, when the bell rings, the expectation might be too burdensome, this swing too great to defeat.

Never mind the enthusiasm that accompanies Lennox Linton's coronation as political leader of the United Workers Party (UWP), never mind the supporters' determination to turn the country blue, they are likely to be seeing red by the time the last votes are counted after the next general election, the pollster and analyst, Peter Wickham has suggested.

"I think a change of government this time is a pipe dream," Wickham, who has conducted several political surveys in Dominica, told The Sun. And the reason is simple, he said. It will take a massive 11 per cent swing away from Roosevelt Skerrit's Dominica Labour Party (DLP) for the UWP to unseat the government.

"In my opinion it looks unassailable."

"Labour has been very, very strong since 1990," Wickham told The Sun, stating the obvious.

This notwithstanding, there are those who might wish to see the DLP's cup as half empty, the Barbadian pollster observed. For example, there are a number of seats in which the margin "is really, really close."

The Laplaine, Morne Jaune and Roseau North constituencies are most at risk, with each requiring a less than one per cent swing to change hands. In addition, Wesley (2.4%) and Castle Bruce (4.8%) are also shaky for the ruling party. However, should the UWP capture all these seats, the DLP would still be left with a relatively comfortable 13 to 8 majority. Other seats held by the DLP that fall within the 11 per cent swing range are Mahaut (8.5%), St. Joseph (8.8%), Soufriere (9.4%) and the Carib Territory (9.6%), with Roseau South falling just outside the range (11.1%).

Wickham argued that 11 per cent swings were not unheard of, making reference to the last general election in Grenada and the 1994 election in Barbados. However, in both instances, the government had collapsed because of in-fighting. "It has happened before," he said, "(but the question is) whether these circumstances present themselves again."

While maintaining that he thought the DLP would still win the next election, Wickham pointed to the fact that the "swing pattern" in the last election in Barbados "was highly irregular" and suggested that "it's time for a negative swing" against the DLP.

"Labour will begin to lose (votes)," he said, "the question is how rapidly will they lose."

That's the issue facing the UWP. Because, despite the fervour and passionate intensity on show at Castle Bruce, despite the sense of rapture that accompanied Linton's appointment, the "Blue" party still faces a challenge to win enough voters' hearts to leave Labour seeing red.