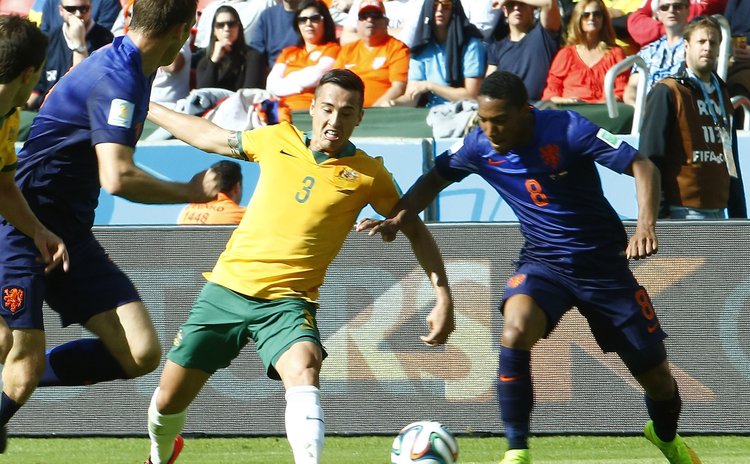 The Oranje, led by Arjen Robben and Robin van Persie, scored two goals in the second half to edge Australia 3-2 in a Group B match on Wednesday.

It was the second straight win for the Netherlands. Collecting six points in the first two matches, Netherlands remained on the top of the group. If Spain fail to beat Chile later on Wednesday, Netherlands would be through to the World Cup knockout stages.

Robben and Van Persie both had their third goal in Brazil 2014. Robben was chosen as the "Man of the Match" after the match.

The Netherlands won their fifth successive World Cup group stage match and are now unbeaten in their last 12 group games at the World Cup finals. Their last group defeat came against Belgium almost 20 years ago: on 25 June 1994.

The dutch team kept the same formation as the first match, in which they defeated the defending champion Spain 5-1. Australia added defender Ryan McGowan and midfielder Matt McKay into squad.

The Netherlands had a slow start, and the Australians kept threatening Jasper Cillessen.

The Netherlands got a free-kick chance in the 17th minute, but a header from Robin van Persie was too easy for the Australian goalkeeper Maty Ryan.

The first goal came at the 20th minute. Bayern Munich left wing Arjen Robben used his speed to break the Australian defense. He picked the ball around the halfway and entered the box before the opponents had time to complete the defending line. Robben hit the ball past Ryan with his left foot strike, marking his third goal at the tournament.

However, Australia made the response just one minute later. Everton star Tim Cahill met the long cross-field pass and powered the shot into the net after it hitting the underside of the bar.

Australia simply out-performed the Netherlands in the later part of the first half making a couple of shots which could have turned into goals.

However, the Socceroos saw a needless foul from Cahill, the Australian team top scorer hit Netherlands defender Bruno Martins Indi and the Feyenoord defender was carried out for treatment afterwards.

Cahill will miss the final Australian group match after the yellow card he got for this foul.

Australian forward Mathew Leckie sent the ball beyond the goal line to begin the second half, but he made a foul before the play, and the ball was called off.

Australia found another chance 54 minutes into the match. Oliver Bozanic, who went on the pitch as a substitute just two minutes before the play, cut in from the left side of the box, and his pass hit the hand of Netherlands defender Daryl Janmaat. Australia was awarded a penalty, and captain Mile Jedinak converted from the spot.

Australia didn't stay in the leading place for long. Netherlands captain van Persie got his chance on the left side of the box. The Manchester United forward found his goal, hitting the roof with a powerful strike to level the score again. The 58th-minute score was his third at the tournament.

It was time for Netherlands to score again. Memphis Depay, who stepped on as a replacement of Indi, fired from outside the box. The shot made an unusual curl, moving past Ryan to reach the net.

The rest of the match belong to the Oranjie. The Socceroos fought hard trying to turn the match around, but they couldn't score any more