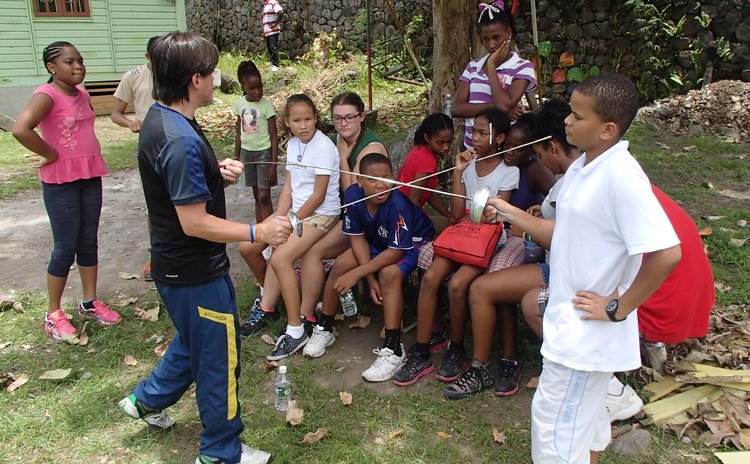 Deceptively enough, you would not look twice at the less than medium height figure as he walks near you. But on second glance, there is the unmistakable sense of compactness you might associate with an ability to shift from a relaxed stance into one of coiled spring agility and fully focused alertness. He is not a martial arts practitioner by way of judo, karate or taiquando. Instead, his art is no less laden with technical element of superior focus of the performing master of combat --- a grand master in the genteel sport of fencing. Aleio Monge of Ecuador was here for one week to conduct with Dominica's Woody Lawrence a summer camp in the basic art of fencing attended by twenty youngsters ranging from six to sixteen years of age. The camp was under auspices of the newly formed Dominica Fencing Association supported by the Pan American Fencing Federation allied to the World Fencing Federation and funded by the Dominica Olympic Committee. It took place at the Public Service Union premises on Valley Road. It was my pleasure speaking with Senor Monge about the camp and fencing in general.

How did the camp go?

Good. The potential for fencing looked very encouraging. The students proved to be focused and highly interested in learning. That's the best type of material you can work with. All of them showed a love for the sport and that's how you get fast progress in absorbing the basic skills of fencing.

Did the camp compare favourably with others you have been involved?

Certainly! It is the first of its kind in Dominica. My experience has been mainly with the Ecuador national fencing team as a coach and I have featured as tutor in camps in South America. I find the young Dominicans just as responsive and eager to learn as their counterparts elsewhere.

What is the most convenient size for a group in a fencing camp?

The group you have here was excellent. Twenty is just about right. Too many students would call for much more technical help.

What type of personality makes a good fencer?

Anyone can become proficient in fencing. The question of character can always be developed later. However, much of what we do is geared towards character formation right at the outset. It is better to start off with children as young as six ,seven, eight, nine, years old. Fencing is a progressive sport and you never stop learning. Depending on his or her physical attributes and aptitude for absorbing the many techniques demanded by the sport, it may take anything from seven to ten years to become really competent; much better to start young.

And what is the intensity of training required?

Kids can start with one hour to one hour and a half of training three times per week. Adults can do with five training sessions weekly.

The structure of a fencing club?

Like everything else you can start off in many different ways. Schools are a good place to begin, with parents included in the organizing of groups. Similarly you can organize the sport in service institutions. From my experience it is better to start the activity in a city where you have more people coming together regularly. After you have groups learning to fence you can think about organizing clubs for competitions.

From your perspective what are the most important skills a fencer must cultivate?

You can't go wrong if you have "reaction", "speed", "agility" and "coordination". Each one is important and each can be developed almost continually as one grows in the sport. Then there is the factor of experience which comes with frequent competition.

How has fencing developed in your home country Ecuador?

I am six years as a coach and have seen our fencers develop to the point where we get among the medals in regional fencing. I coach a group in foil and we are looking seriously at our medal prospects in the next Olympic Games in Brazil in 2016. A gold medal is a clear possibility if all goes well.

Are your business houses keen on sponsoring the sport?

The students' parents help them to buy their implements especially when they are very young. Where they cannot afford to pay their way the state pays to make things easier for the talented ones showing good progress and displaying the proper attitudes to go to various competitions.

Which other sports can assist students to develop their fencing?

At the very beginning a sport like baseball helps. The throwing action is similar to some of the moves in fencing, and swimming aids in development of the shoulder area.

Every thanks to you maestro Aleio Monge and may you have a safe journey home.

The fencing camp ended with a brief ceremony at which participating certificates were distributed by Mr. Felix Wilson, President of the Dominica Olympic Committee.