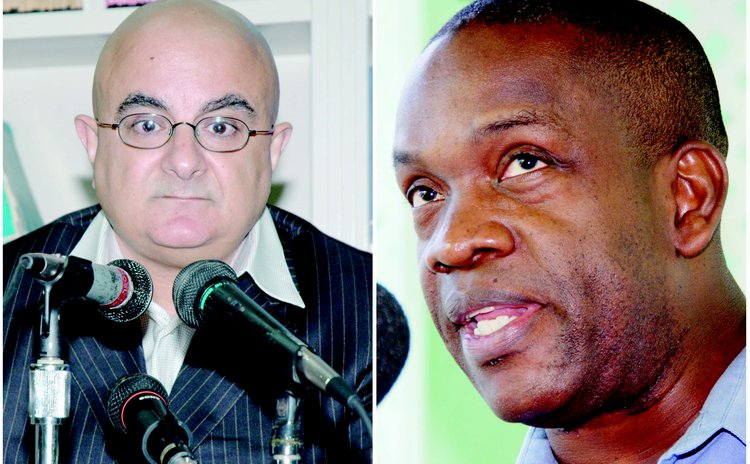 Give us one million dollars and apologize. Or lets' go to court.

He says comments by Lennox Linton, the leader of the United Workers Party (UWP), are "reckless and dishonest" and through his junior lawyer, Lennox Lawrence, Astaphan has written to Linton demanding an apology within 48 and one million dollars in compensation. Politics is an expensive business, in many ways.

At the UWP rally held in St Joseph on Sunday May 25, 2014, Linton referred to the alleged activities by ministers of the Government as "rape" and stated that "there is no honour in a government who harbours them."

"There can be no honor in a government that harbours rapist Ministers and upholds extortion of sexual services from young people seeking the facilitation of Ministers to get personal development assistance from the public purse," he said.

According to Linton, there is a report made to the police on June 19, 2013 by a young woman who was seeking assistance and was asked by a Minister to "come to his home" and when she did, he tried to force himself on her.

Speaking on Kairi FM and state-owned DBS radio Astaphan said the he was "absolutely shocked and stunned" by the allegations and described them as "the most crass, nakedly dishonest statement from a political platform, from a political leader in the history of Caribbean politics."

"Every Minister of government is entitled to take legal action against Mr. Lennox Linton…that sort of reckless and dishonest statement must never be allowed to become part of the political circus the UWP is creating. It must be taken seriously and it must be confronted vigorously and seriously," Astaphan stated.

He continued: "Mr. Linton used only one alleged complaint to the police, the facts and circumstances of we know nothing, to condemn the entire cabinet which include at least two female members…I think that is outrageous."

But is response a defiant Linton says he is standing by his statements and is prepared to go to court.

"So let Mr. Astaphan sue. He is a lawyer, he is the lawyer for the government, he is a senior counsel, he has a way of dealing with the business of clients in one way and then later on in life when it is convenient to him, he comes with another story to suit his purpose. That's fine. Tell Mr. Astaphan to bring it on."