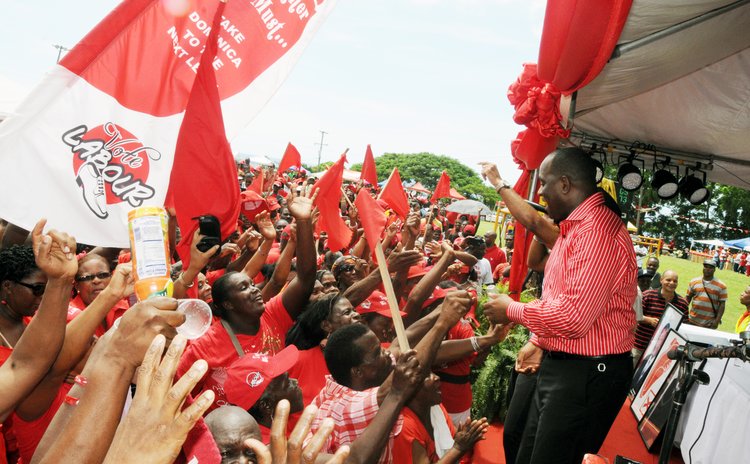 A Prime Minister must be knowledgeable, competent, trained, and amendable to new ideas; charismatic and, most importantly, he or she must be a uniting force in the country.

In the sweltering Poree Playing Field in Pointe Michel on Sunday, Prime Minister Roosevelt Skerrit said, since Dominicans have closed the discussion on the qualifications for the holder of the post of Head of State, they should now turn their attention to the role and function of the Head of Government.

"As of tomorrow I invite all Dominicans resident at home and abroad to join the conversation that has just been started," he said. "Give us your take on the requirements for leading Dominica in the second decade of the Twenty-first Century."

Speaking to hundreds of supporters of the ruling Dominica Labour Party at a delegates' conference, Prime Minister Skerrit said he was pleased with the level of discussion that Dominicans initiated on the functions of a Head of State. That discussion precipitated the withdrawal of Mr. Skerrit's nominee, Alix Boyd-Knights, the Speaker of the House of Assembly.

"The outcome has reinforced and strengthened in my mind the joy and privilege of being Dominican," Skerrit said. "Those who made contributions to the debate acted well within their constitutional rights."

Mr. Skerrit added that he listened and evaluated: "I told myself no matter what, the best interest of Dominica had to be pursued and promoted over all considerations."

"I admired the passion of the newly elected political leader of the United Workers Party on the issue," Skerrit said.

But apparently questioning the competence of Lennox Linton, Prime Minister Skerrit said the economic crisis facing Dominica and the world has not abated and that it is difficult to finance the operations of a government of a developing country like Dominica.

"Administering the affairs of State during this period is very serious and difficult business," he said. "This is certainly not a terrain for rookies. The head of government is certainly no place for a novice. There is no room for error in this important and serious business".

Although the five-five hour function was billed as its annual delegate's conference, the planners apparently made no allowance on the programme for "conferring"; apart from the reading of a resolution which called for the re-election of the Party's Central Executive, the programme resembled a typical political rally.

From mid-day to way past five in the afternoon, delegates were treated with music from five calypsonians (Daddy Chess, Hunter, Comforter and Scrunter) as well as Cadence kings, the Midnight Groovers. Additionally, there were eight speeches including two addresses from Antiguan and Bajan politicians.