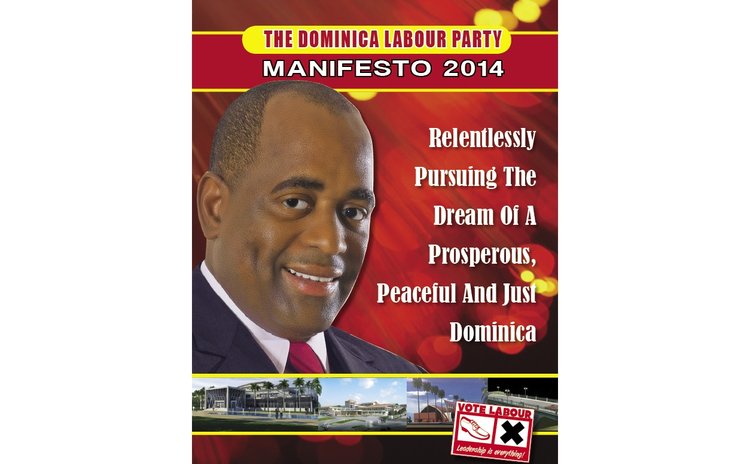 Cover of the DLP manifesto

"We knew from as early as 2000 and we still know that the Dominica Labour Party (2014) is the best equipped party to successfully pursue true independence by merging political sovereignty with economic security, prosperity and social justice," said the Prime Minister Roosevelt Skerrit at the launching of his party's manifesto on November 13, 2014 at the Dominica State College Multi-media room.

December 8, 2014 is slowly approaching when Dominicans will head to the polls to elect a new government. Eight days after announcing the date for the general elections, Prime Minister Skerrit, in a room-full of members of the private sector and civil society gave an overview of the DLP's 2014 Manifesto.

"I have to present this overview first to representatives of the private sector and other key members of civil society out of my utmost respect for you and the role you have traditionally played in the economic and social development of our nation," said Prime Minister Skerrit.

The Prime Minister explained that the manifesto is a special document carefully drawn up to answer several questions which Dominicans are entitled to ask at this point in time.

He added: "As a result it provides a summary record of the major achievements of the DLP since 2000. It also gives a clear outline of our plans of advancing the process of social and economic change over the next five years."

He noted that "this manifesto therefore starts with an analysis of the global situation with respect to free trade, the technological revolution and the financial crisis of 2007-2008 that led to the worse recession we have experienced in nearly one hundred years."
Skerrit indicated that when the DLP came into government in 2000 its focus was on stabilizing the economy and reducing the country's debt to GDP down to 70%.

"From 2000 we embarked on developing new policies and programmes in keeping with the new world order…From the inception we knew we had to stabilise and grow the economy. The first task was to reduce the high debt to GDP ratio that has plagued the country since 1995. In 2000 the national debt stood as 130% to GDP by 2013 the DLP had reduced it to 70% of GDP," he said.

He went on to say that agriculture will remain one of the pillars of the economy to aid in food security. He also noted that in the next five years in office the DLP will diversify the tourism sector to account for 50% of the country's GDP.

In 2009, he said, persons under the age of 18 and over the age of 60 received free health care. Also negotiation is on-going with the Pan American Health Organization (PAHO) for the introduction of a national health insurance system.

"Civics, culture, technical and vocational skills, agriculture and hospitality will feature prominently in the curriculum so civics will be mandatory in all schools in our country come 2015," he said.

In the area of housing, the Prime Minister said by 2020 there should be no pit latrines in the homes of Dominicans. There are plans to build 1500 affordable homes and the continuation of training for craftsmen and women in the building and construction industry.

The opposition United Workers Party (UWP) is expected to launch its manifesto before the election.